The new government, a mix of political parties, has little in common other than the desire to oust current Prime Minister Netanyahu.

The coalition spans from the far left to the far right and includes for the first time a small party representing Palestinian citizens of Israel, representing 21% of the country’s population.

Analysts say it is expected to focus primarily on economic and social issues rather than run the risk of exposing internal gaps in trying to address important diplomatic issues such as the Israeli-Palestinian conflict.

Palestinian leaders have rejected the change of government, saying the Israeli prime minister will likely follow the same right-wing agenda as his predecessor.

The Palestinian Foreign Ministry issued that it was “inaccurate” to call Bennett’s coalition government a “government of change” unless there was a significant change in its position on the Palestinian right to self-determination and establishment of an independent Palestinian state with East Jerusalem as its capital.

These are the leaders who will lead the new government:

Bennett, a former ally of Netanyahu, has defended his decision to join the new coalition to save the country from a period of political turmoil that could otherwise see a fifth election in just over two years. He served in previous Netanyahu-led governments, most recently as Minister of Defense.

He opposes Palestinian independence and strongly supports illegal Jewish settlements in the occupied West Bank and East Jerusalem, which the Palestinians and much of the international community see as a major obstacle to peace. Settlements are illegal under international law.

In the past, the Israeli leader called for the annexation of the occupied West Bank, but analysts believe the plan seems unfeasible, given its new centrist and left-wing partners.

Bennett, who made a fortune in Israeli high technology before entering politics in 2013, is known to be ultra-liberal in the economy.

The new prime minister has been opposed to the reactivation of Iran’s nuclear deal with world powers. And in his speech to the Knesset after winning the vote, he vowed to maintain Netanyahu’s policy of confrontation with Iran.

“Israel will not allow Iran to arm itself with nuclear weapons. Israel will not be a party to the agreement and will continue to preserve full freedom of action. “

Under the coalition agreement, Bennett will serve as prime minister for two years and until he is replaced by Yair Lapid. He will be the first leader in the country to wear a kippah, a cap worn by Orthodox Jews.

Yair Lapid heads the centrist party Yesh Atid (There is a Future) and was the architect of the new government. His party is the largest in the coalition, but agreed to share power with Bennett to get a parliamentary majority.

He left his post as a television presenter in 2012 and formed his own party, promising to ease financial pressures on the middle class. It also tries to end many of the state-funded privileges enjoyed by ultra-Orthodox Jews, a long-standing source of anger for many secular Israelis.

He initially served as finance minister before joining the opposition, which he led until Sunday.

Lapid will serve as foreign minister for two years and then take over as prime minister until the end of the government, as long as he lasts that long.

Just two years ago, Gantz, a former military leader at the head of the centrist blue and white party, was the opposition’s best hope for ousting Netanyahu.

He came closer than other candidates to ousting Netanyahu in three unprecedented elections between April 2019 and March 2020, which prevented the former prime minister from forming a government bloc of right-wing and religious parties.

But he agreed to join Netanyahu in a “unity” government last April, a decision that angered many of his supporters.

He will be part of the new coalition and will remain in the post of Defense Minister he held under Netanyahu.

Lieberman, a far-right immigrant from Moldova living in an illegal Israeli settlement in the occupied West Bank, has been a political joker for the past decade. He has joined the Netanyahu governments, including as Minister of Defense, but also quit smoking.

As finance minister, he will have to curb a budget deficit that widened during the coronavirus crisis.

He has also said he will try to change the status quo between the government and Israel’s politically powerful ultra-Orthodox minority, which is a mainstay of Netanyahu’s outgoing government.

The ultra-Orthodox community has low labor force participation rates and relies heavily on government documents while focusing on religious studies. Lieberman has said he will work to integrate them more into the economy.

Gideon Sa’ar was Netanyahu’s main rival within the Likud, but the former prime minister did his best to keep him out of the spotlight and away from the highest-level portfolios. Frustrated, Sa’ar launched a failed leadership candidacy and then left his own party behind.

As head of the New Hope party, Saar will be opposed to the Minister of Justice, where he will oversee the legal system and become a member of the security cabinet.

Abbas’s small united Arab list will be the first party of an Israeli government to be extracted from the Palestinian citizens of Israel.

He split with other Palestinian politicians who prefer to stay out of government and set aside differences with Bennett and other right-wingers to tip the scales against Netanyahu.

Abbas is expected to serve as deputy prime minister in the prime minister’s office. Its goal is to negotiate a large increase in government spending on Palestinian cities and towns.

But their presence is a potentially destabilizing factor. The Palestinians have criticized him for agreeing to support an Israeli government while Israel continues to occupy Palestinian territories.

Addressing these tensions, Abbas told the Italian newspaper La Repubblica on Friday: “There will be difficult decisions, including security decisions. We must juggle our identity as Palestinian Arabs and citizens of the State of Israel, between civil and nationalist issues. ” 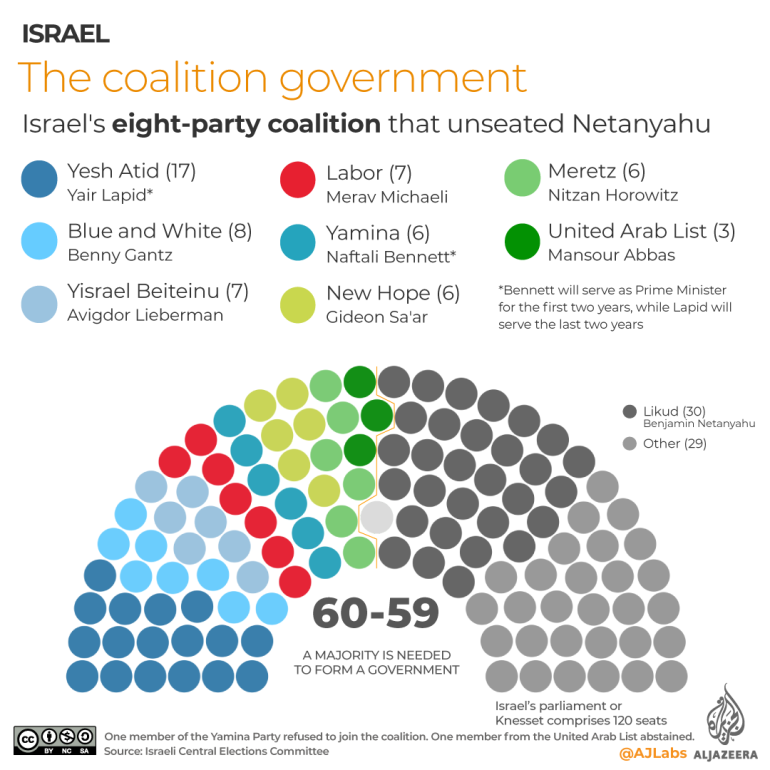