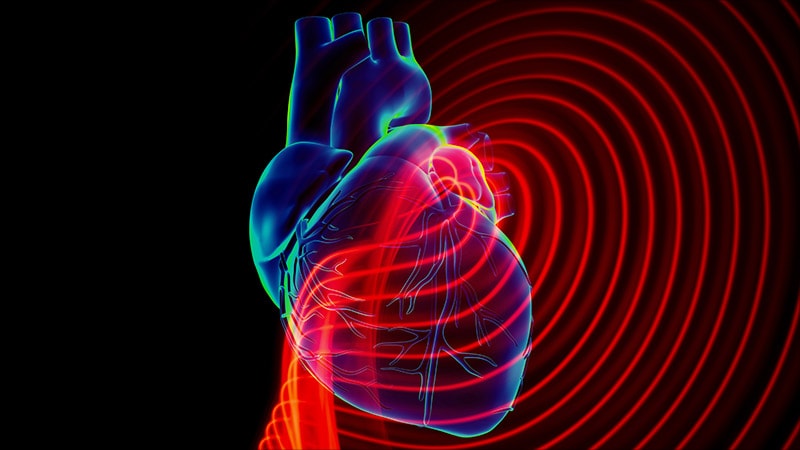 The combined data from five implantable cardioverter-defibrillator (DCI) trials suggest that the underlying arrhythmic disorder, rather than the DCI therapy itself, affects the mortality of these patients.

Analysis of the MADIT II, MADIT-RISK, MADIT-CRT, MADIT-RIT, and RAID trials showed that the main determinant of mortality in patients receiving a primary prevention ICD was the arrhythmic substrate leading to the onset of rapid ventricular tachycardia (VT), defined as ≥ 200 bpm, or ventricular fibrillation (VF), no adverse effects of ICD shock therapy itself.

Patients who experienced a TV episode had a twice-higher risk of death than during a two-and-a-half-year follow-up; however, CIM therapies for TV less than 200 ppm and inadequate CIM shocks were not associated with an increased risk of death.

The conclusions are published online May 17 at Journal of the American College of Cardiology.

“There is conflicting data on the impact of ICD shocks on subsequent mortality, and in this study we aimed to determine whether shocks alone increase the risk of subsequent mortality or whether the arrhythmic substrate leading to ICD therapy poses a risk. subsequent death “. Said Act.

Patients receiving appropriate DCI therapy were more likely to be male and to have previous atrial arrhythmia and unsustainable TV compared with those who did not have DCI therapy.

Patients receiving inadequate shock were more likely to be younger, African American, and less likely to have previously unsustained VT compared with those without ICD therapy.

Most patients (90%) received beta-blockers and angiotensin converting enzyme inhibitors or angiotensin receptor blockers regardless of device therapy during follow-up and 10% of patients were treated with amiodarone.

In contrast, other types of appropriate and inappropriate shock or ATP therapies were not associated with a significant increase in risk.

“Our findings shed light on the mechanisms associated with an increased risk of mortality in primary prevention CIM recipients,” Aktas said.

“Studies evaluating interventions focused on the treatment and stabilization of the myocardial substrate that promotes ventricular tachyarrhythmias such as catheter ablation are needed to improve survival in heart attack patients, “he added.

In a accompanying editorial, Rajat Deo, MD, MTR, and Naga Venkata K. Pothineni, MD, both of the Perelman School of Medicine at the University of Pennsylvania, Philadelphia, praised the researchers for their “reflective study design.”

“The message to take home that is most relevant to our clinical practice is clear: sustained ventricular arrhythmias are a prognostic marker of death and hospitalization for heart failure,” they write.

“It is worrying to note that black patients had a markedly higher rate of inadequate ICD therapies compared to white patients, and this stood at some of the most respectable, established, and well-funded clinical trials,” they write.

Reasons for disparities in outcomes include access to appropriate and affordable medical therapies, access to specialized clinics and caregivers, remote ICD control, and compliance issues.

“Future work will need to understand how the social determinants of health, including race, affect the treatment and outcomes of our primary ICT prevention population,” they write.

“At the same time, we must continue to collaborate with industry colleagues and work with our professional societies to ensure health equity in our patient population,” they conclude.

Aktas has received research grants from Boston Scientific and Medtronic. Deo and his co-editorialists do not report relevant financial relationships. The MADIT trials were funded by an unrestricted Boston Scientific Research Fellowship at the University of Rochester Medical Center. The RAID trial was funded by the National Institutes of Health.