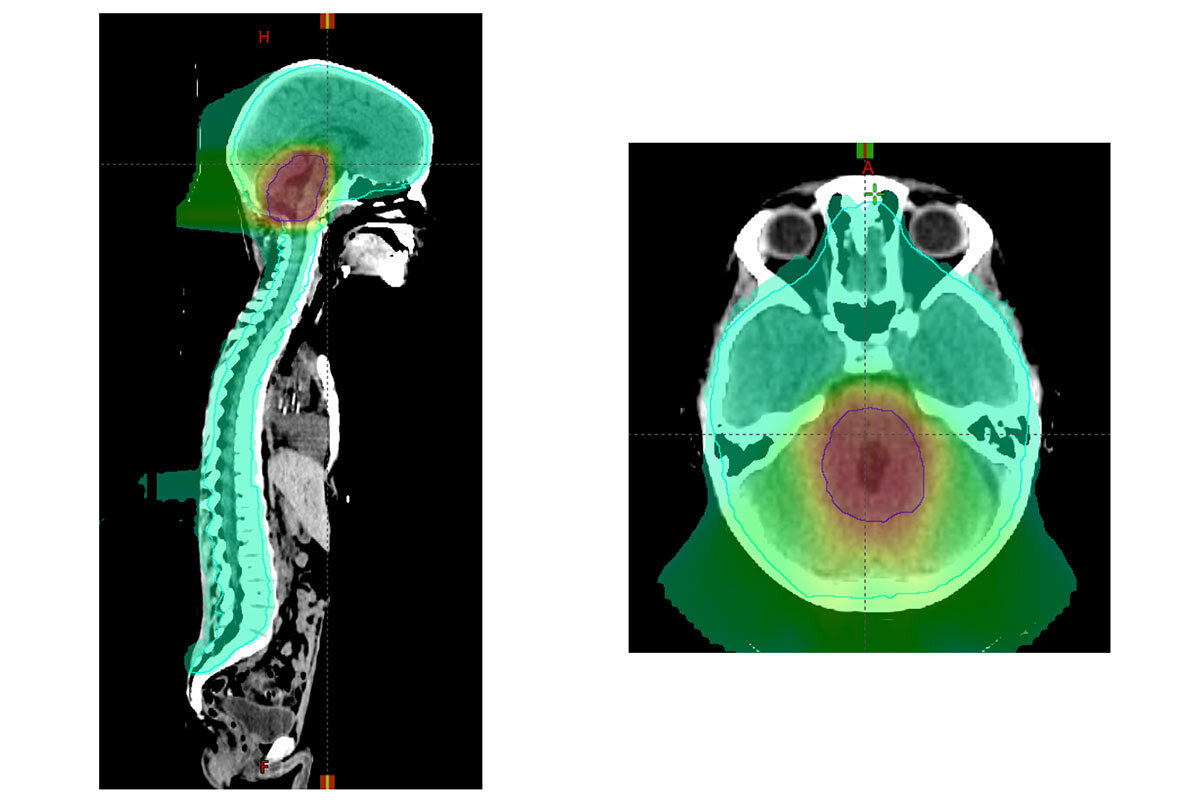 Medulloblastoma is a rare but devastating childhood brain cancer. This cancer can spread through the spinal fluid and can be deposited anywhere else in the brain or spine. Radiation therapy to the entire brain and spine followed by an additional dose of radiation to the back of the brain prevents this spread and has been the standard of care. However, the radiation used to treat these tumors affects the brain and impairs cognitive function, especially in younger patients whose brains are beginning to develop.

A national study led by the University of Washington School of Medicine in St. Louis. St. Louis Jude Children’s Research Hospital suggests that children with so-called “medium-risk medulloblastoma” may receive an “increase” in radiation to a smaller volume of the brain at the end of a six-week course of radiation therapy and still maintain the same disease control as those receiving radiation to a larger area. But the researchers also found that the dose of preventive radiation treatments given to the entire brain and spine during the six-week regimen cannot be reduced without reducing survival. In addition, the researchers demonstrated that patients ’cancers responded differently to therapy based on tumor biology, laying the groundwork for future clinical trials of more specific treatments.

The findings appear online June 10 at Journal of Clinical Oncology.

“Medulloblastoma is a devastating disease,” said first and corresponding author Jeff M. Michalski, MD, the distinguished professor of radiotherapy oncology Carlos A. Perez of the University of Washington. “It is a malignant brain tumor which develops in the cerebellum, the lower back of the brain, which is important for coordinating movement, speech, and balance. Radiation treatment of this tumor can also be a challenge, especially in younger children whose brains are actively developing in these areas. There is a balance between effectively treating the tumor without damaging children’s ability to move, think and learn. “

Children with medium-risk medulloblastoma usually undergo surgery to remove as much of the tumor as possible. They also receive chemotherapy and radiotherapy to prevent the tumor from spreading to other parts of the brain and spine through the cerebrospinal fluid.

“We wanted to investigate whether we could safely reduce the amount of radiation these patients receive, saving normal parts of the brain and decreasing the side effects of children with this type of brain cancer, while maintaining effective treatment,” said Michalski, also vice president. and director of clinical programs for the Department of Radiation Oncology. “We found that reducing the dose of radiation received during the six-week course of treatment had a negative impact on survival. But we also found that we could safely reduce the size of the volume of the brain that receives an increase in radiation at the end. We hope that these measures can help reduce the side effects of this treatment, especially in younger patients. “

In collaboration with U.S. and international pediatric hospitals, the researchers evaluated 464 patients treated for a medium-risk medulloblastoma that was diagnosed between the ages of 3 and 21 years. Younger patients, 3 to 7 years of age, a key moment for brain development, were randomly assigned to receive either the standard dose (23.4 grays) or low-dose (18 grays) radiation in the head region. and of the spine in each of the 30 treatments given for six weeks. All older patients received the standard dose, as their brain development is less vulnerable to radiation. In addition, all patients were randomly assigned to receive two different sizes of an “increase” in radiation at the end of the six weeks of therapy. For the increase, all patients received a cumulative radiation dose of 54 grays in the entire region of the brain called the posterior fossa, which includes the cerebellum, or in a smaller region of the brain. brain which includes the original contour of the tumor plus an additional margin of up to about two inches beyond the boundary of the original tumor.

“Patients who received a smaller increase did the same as those who received all the madness from the posterior fossa,” said Michalski, who treats Siteman Kids patients at the University of Washington School of Medicine and the University of Washington. St. John’s Children’s Hospital Louis. “Many doctors have already adopted this smaller increase volume, but we now have high-quality evidence that is certainly safe and effective.”

“We saw higher rates of tumor recurrence and spread in younger patients receiving the lowest dose of craniospinal radiation,” Michalski said. “In general, it is not safe to reduce the radiation dose in children with medulloblastoma, even if we know that the lower dose can impair their cognitive function. However, a specific subgroup of patients (those with mutations in a gene called WNT) the lowest dose, so we are now doing studies only with these specific patients to see if we can safely go down radiation dose for them “.

Tumors were classified into four molecular subgroups according to their gene expression and predicted biology. Tumors in the first group show mutations in the WNT signaling pathways; the latter have mutations in the SHH gene; and third- and fourth-group tumors have different and more complex patterns of gene mutations. The researchers found differences in tumor responses to treatment based on tumor biology that may guide the design of future clinical trials.

“We have made great strides in the last 15 years to appreciate the molecular diversity of medulloblastoma,” said Paul Northcott, lead author, of St. Jude Children’s Research Hospital, lead author. “We performed complete exome sequencing and DNA methylation profiles to assign patients to molecular subgroups. This was a critical step in contextualizing this trial based on the latest biology and showed us some differences. important in the way children respond to therapy that they would not otherwise have been The results of this study will play a vital role in the design of the next generation of clinical trials for children with medulloblastoma. ”

Patients with medulloblastoma should receive chemotherapy and radiation therapy after surgery