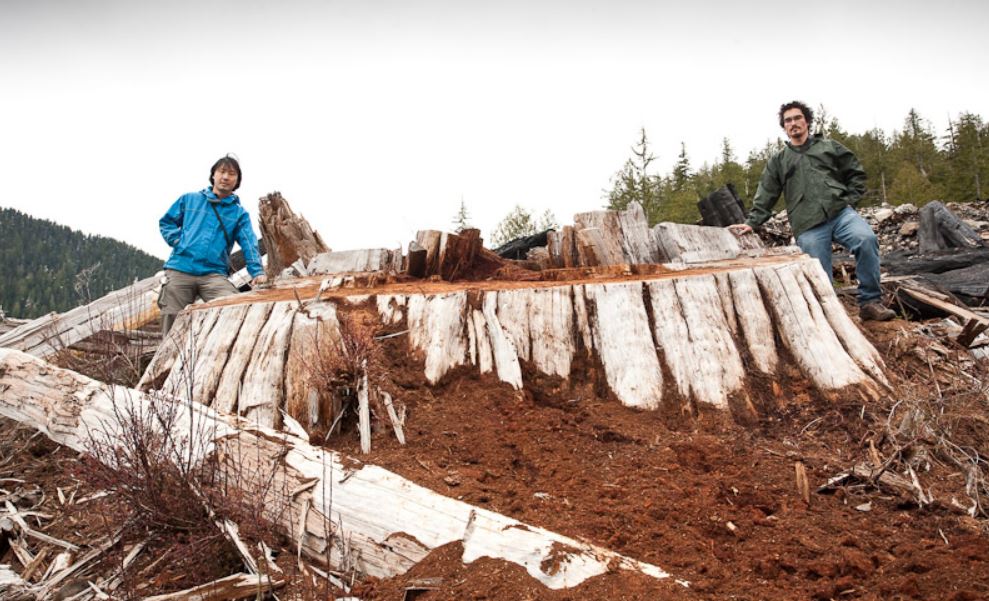 A huge old-growth red cedar stump measuring 4.5 m in diameter was recently found in a direct cut in a tributary of the Gordon River, near Port Renfrew, BC. So far, 90% of the old productive growth of the Vancouver Island Valley bottom has been recorded. Image – TJ Watt CC SA 3.0

Since August 2020, protesters have blocked forest roads near the Fairy Creek watershed, west of Vancouver Island. The dispute has restarted the debate over whether there should be a moratorium on deforestation in Canada’s ancient forests.

Protests and a month-long blockade that began last August against private logging company Teal Jones in the Fairy Creek watershed west of Vancouver Island have been heated since May ‘this year, with a total of 170 arrests as of June 5th.

In the confusion created by the protests, Katrine Conroy, British Columbia’s forestry minister, suggested on Friday that there was a pause in logging in the controversial area almost two months ago, according to Tyee’s news.

Conroy’s statement is a surprise to people engaged in the fight to protect BC’s ancient forests and seems to contradict the comments Prime Minister John Horgan made earlier in the week.

“Pacheedaht, industry owners, and the province have agreed that no harvesting will take place in Fairy Creek while the Pacheedaht develop their own custody plan,” Conroy wrote to the Vancouver Sun opinion column.

“The Pacheedaht is involved in this internal process right now and there is no harvesting at Fairy Creek,” Conroy wrote. “Our BC NPD government supports this work and we will respect Pacheedaht’s request not to interfere. We believe in working respectfully with First Nations and when the land is respected, it is a benefit to all.”

Indigenous peoples of the region

The Fairy Creek watershed is in the territory of the Pacheedaht First Nation, and in general, the elected leadership distanced itself from the protest of protest activities in 2021. However, as a direct descendant of the family line. claimed to be the hereditary decision-makers or speakers of the territory, Elder Pacheedaht, Bill Jones, supported the protest activity.

In a printed paper to the Rainforest Flying Squad last month, Elder Jones called for careful custody of the Fairy Creek watershed and to avoid the destruction of the remaining sacred sites for short-term benefits.

In the coastal region of British Columbia, trees over 250 years old are defined as ancient growth. Old forests support a greater diversity of plants and wildlife, including endangered marble turret birds and northern goshawks.

Of the remaining 13 million hectares (32.12 million acres) of old forest in BC, most consist of high alpine trees unfit for felling. The rest of the dispute is the remaining trees at the bottom of the valley.

There are about 38,000 workers in the westernmost province of Canada, according to the industry, the work depends on the felling of imposing old trees such as cedars, Douglas firs and western cicadas with a minimum age of 250 years and, in some cases, more than a thousand.

The timber industry claims that protests and blockades by environmental activists endanger the livelihoods of thousands of working families. Many workers in the lumber industry are members of the second or even third generation of families who have worked in the industry.

And while old-growth forests are declining, there doesn’t seem to be any inclination to stop cutting them down. The value of the finished wood is too good to pass. But in the end, all good things must end.

Reuters reports Fairy Creek protester Shambu, 47, said it is “inevitable” the old logging will come to an end as the resource disappears and government funding is needed to help the industry transition to logging and processing of planted forests.

“Do we leave these loggers to make a living in a dying industry or do we help them? Either we resolve the transition funding now, when there is still a fraction of the old growth left, or when there is none, ”said Shambu, who joined the Fairy Creek blockade last August.