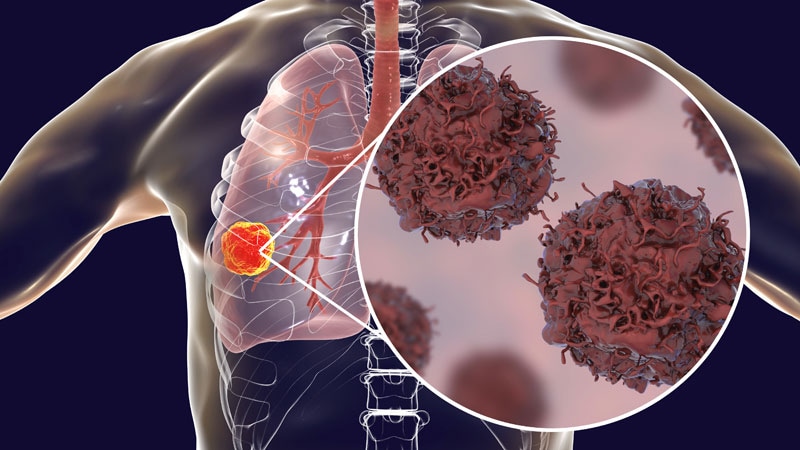 Shi presented these findings, from the ORIENT-3 study, at the 2021 annual meeting of the American Association for Cancer Research: Week 1 (Summary CT041).

ORIENT-3 enrolled and randomized 290 patients with stage IIIB / IIIC or IV sqNSCLC and disease progression during or after the first platinum-based chemotherapy. They were randomized 1: 1 to receive sintilimab at 200 mg or docetaxel at 75 mg / m2intravenously every 3 weeks until disease progression or intolerable toxicity.

The mean age was 60 years in the sintilimab arm and 61 years in the docetaxel arm. Most patients were male (94% in the sintilimab arm and 90% in the docetaxel arm), most were current or former smokers (90% and 80%, respectively), and more than three-quarters had a ECOG performance status of 1 (76% and 77%, respectively). More than half of the patients had a PD-L1 tumor ratio (TPS) score of 1% or higher (57% and 47%, respectively) and 81% of the patients in both arms had stage IV disease.

At a mean follow-up of 23.56 months, the median OS was significantly longer in the sintilimab arm than in the docetaxel arm: 11.79 months and 8.25 months, respectively (risk ratio, 0.74; Pg = .02489). The advantages of the operating system were generally consistent across all subgroups.

“Sintilimab had a favorable safety profile with respect to docetaxel, with a lower frequency of adverse events related to grade 3 or higher treatment, with no new safety signs observed,” Shi said.

Use in the real world

Noting the significant OS and PFS benefits of sintilimab, as well as the superior response rate and duration of response, Shi concluded, “Sintilimab could provide an alternative second-line treatment option for advanced and metastatic sqNSCLC.”

AACR moderator Marina Garassino, MD, of the University of Chicago, commented on the potential utility of sintilimab and tislelizumab, another control point inhibitor that was evaluated in NSCLC in the RATIONALE 303 trial (AACR 2021, Summary CT039). Garassino noted that both drugs have demonstrated superiority to docetaxel as second-line therapy in NSCLC.

Although there have been no side-by-side trials, sintilimab and tislelizumab appear to be very similar to the already approved immune control point inhibitors, which are currently used as first-line treatment.

“This similarity would make them unsuitable for second-line treatment, except in countries where immune control point inhibitors are not yet approved for first-line therapy,” Garassino noted.

When asked to comment on the highest treatment-related mortality rate observed with sintilimab, Garassino said, “We must remember that these drugs were developed in China with a population that may have a profile of effects. “We are very familiar with this kind of drug and we know how to treat its side effects. Similar drugs, but different populations and different trials, so it’s very difficult to judge.”

Garassino speculated that with the “super-expensive” price tags of the new checkpoint inhibitors, it would be welcome to have additional agents who could offer options and reduce prices.