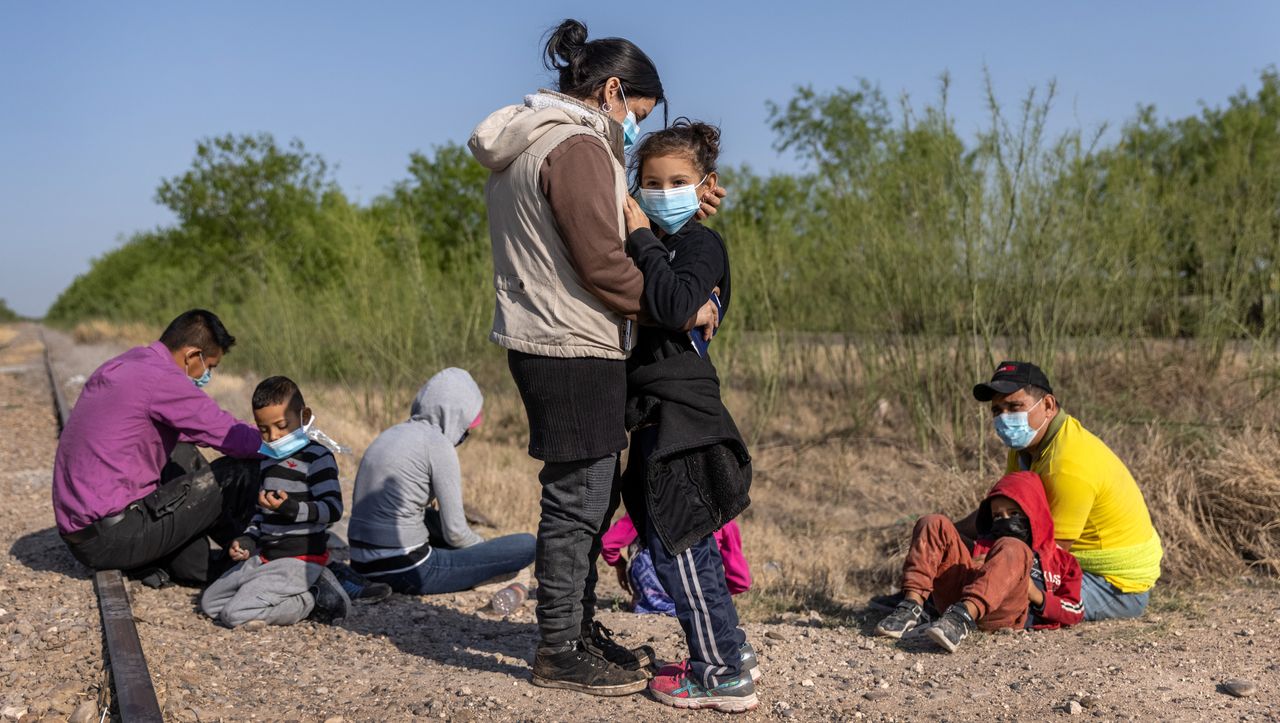 For our Global Societies project, reporters around the world will be writing about societal problems, sustainability and development in Asia, Africa, Latin America and Europe. The series will include features, analyses, photo essays, videos and podcasts looking behind the curtain of globalization. The project is generously funded by the Bill & Melinda Gates Foundation.


It’s a sad place – one where children’s dreams are shattered. The Noemi Alvarez Quillay shelter for unaccompanied immigrant minors is located in downtown Ciudad Juárez, near the border to the United States, a nondescript, flat concrete building with barred windows. More than 100 children between the ages of three and 16 are currently being held here. The parents of many of them have already made it to the United States.

The crisis at the border between Mexico and the U.S. has been coming to a head in recent months, with hundreds of children from Latin America currently arriving in Mexico every day. In March alone, the U.S. Border Patrol apprehended 19,000 unaccompanied minors on American soil – more than ever before in a single month – and the reception camps in the U.S. are overcrowded. But those who succeed in getting across the border at least have the hope of a new life. Currently, unaccompanied minors are not immediately deported from the U.S.

The situation is different when children arrive in the U.S. with their parents. Then, under an epidemic protection order issued under former President Donald Trump, the family is often transported back to Mexico within hours, without even being given the opportunity to apply for asylum. This has led many parents to separate from their children before they reach the border and send them off on their own.

But even that isn’t much of a guarantee. If the children get caught on the Mexican side by police or border guards – and this often happens at the last minute, just before they reach their destination – they end up in this shelter in Ciudad Juárez or somewhere similar. Most of the children here are now waiting to be deported back to their home countries.

“They are very strong,” says Claudia Villalobos, a psychologist at the shelter. “They don’t realize what a dangerous journey they have taken on.” In a way, this protects the children from trauma. “What really gets to them is the fact that the opportunity has passed, that they didn’t make it. They feel like failures.”

It can take months before the children are finally deported – a time in which they are neither allowed to leave the compound nor go to school. There are activities like painting, chess, sports, a courtyard and a TV room where they can watch things like “The Lion King.” The children sleep in bunk beds. The toilets at the shelter can’t be locked from the inside to prevent suicides.

DER SPIEGEL contributor Luis Chaparro was able to speak to children at the shelter. Here, two of those children tell their stories from their point of view. Their experiences are similar to those of many refugees and migrants. To protect the children, we have changed their names. Their real names are only known to the reporters.

“I thought I was going to die,” Juliana Fernandez, 10, from Honduras

“I miss my mommy. She went to the U.S. five years ago and works as a maid in a hotel in Kansas City. She planned to bring me there a little while later. But then she told me on the phone that it wasn’t a good time for me to go because of the president at the time. I ended up staying with my father in Honduras. But he was getting worse and worse. He came home drunk every day. We argued because he kept the money my mom sent for me.

I called my mom in January and told her everything. She told me to come to her. Then, one day, my aunt came and told me it was time to go. I took a backpack with a few clothes. My aunt and I joined a caravan. There were maybe 300 people. We walked across the border into Mexico.

In Mexico, we had to ride in the trunks of cars. Once, we were in a big truck with a lot of other people and I was terrified. I felt like I couldn’t breathe. I thought I was going to die.

My aunt took me as far as the city of Puebla, where she then headed back to Honduras. I miss her. I don’t know where she is now. I continued traveling with other families until I reached the border in Ciudad Juárez (which is located around 2,000 kilometers away from Puebla). Then a man told me to walk across the riverbed and then contact the U.S. border police. But when I set off, a policeman stopped me and I was brought here.

I am allowed to talk to my mom on the phone once a week. I called her when I first got here. She was happy because she thought I was in the U.S. Then she was very sad when I told her I didn’t make it. She cried.

The lawyers say my case is very difficult. I have to wait now until a decision is made about whether I can go to my mom. I know that this former president, Donald Trump, hated migrants and built a wall, but he is gone now. I could go to school in the U.S. and learn English, and I’m sure I would make friends there. I can’t go home. I don’t miss home. I want to be with my mom.”

“I’m ashamed because I didn’t make it,” José Lopez, 14, from Guatemala

“I left because I wanted to help my family. We come from a poor village in Guatemala. We grew corn and coffee, but two hurricanes destroyed our entire crop. My dad is too old to work. My mother is ill. It was my dream to help them because I’m the oldest.

After the hurricanes, we had to beg. Then we decided as a family that I should go to the U.S. to work. I don’t know how much money my parents paid the smugglers. But it must have been a lot, because we sold our land.

In February, a man from the village told us that now was a good time to leave because there was a new president in power in the U.S. who had opened the doors for all of us. The man took my father and me to the border between Guatemala and Mexico and we continued by bus. Another man welcomed us in the city of San Luis Potosí. We had a code word, but it was the wrong one. So we had to pay the man money again and we were given a new code word.

The smugglers told us it would be better if my father stayed there, and I continued my journey alone. He said that if the police arrested me alone, they wouldn’t send me back, but they would if I were together with my dad. We waited a few days. The smugglers said it was our decision, but warned that we would be wasting a lot of money if my father came along.

So, I went on my own. We said our goodbyes and my father told me to take care of myself and to call him when I arrived in the U.S. I didn’t feel good about it. I tried to think of the U.S. My plan was to work at a construction site in Virginia. Then I could have sent money home.

The smuggler and I continued on different buses. They said that if anyone asked me, I should say the smuggler was my uncle. In Ciudad Juárez, they put me in a trunk. I was afraid. I know that many migrants are kidnapped and killed in Mexico. I was taken to a house with many people. We stayed there for about a week. Then we were in a hotel room.

Then one day, the smuggler said it was time. He took a girl and me and brought us to the border. We tried to run across, but Mexican soldiers stopped us. That was the worst moment, because I knew I had now wasted all my family’s money and would come back with nothing. I miss my father and mother, but I am ashamed because I didn’t make it.

I don’t know what is going to happen to me now. Either my father will pick me up here or I will have to wait until they take me back to Guatemala by plane. I speak to my mother by phone once a week. We don’t know where my father is and we can’t reach him. Maybe he doesn’t have a phone anymore.

I don’t think I can try this again. It costs a lot of money. Where are we supposed to get the money? I heard that the new American president is supposed to be good to migrants. But I don’t know if that’s true. Is it true?”

This piece is part of the Global Societies series. The project runs for three years and is funded by the Bill & Melinda Gates Foundation.

The Global Societies series involves journalists reporting from Asia, Africa, Latin America and Europe about injustices in a globalized world, societal challenges and sustainable development. The features, analyses, photo essays, videos and podcasts, which originally appeared in DER SPIEGEL’s Foreign Desk section, will also appear in the Global Societies section of SPIEGEL International. The project is initially planned to run for three years and receives financial support from the Bill & Melinda Gates Foundation.

The Bill & Melinda Gates Foundation (BMGF) is funding the project for a period of three years at a total cost of around €2.3 million.

No. The foundation exerts no influence whatsoever on the stories and other elements that appear in the series.

Yes. Large European media outlets like the Guardian and El País have similar sections on their websites — called “Global Development” and “Planeta Futuro,” respectively — that are likewise funded by the Bill & Melinda Gates Foundation.

In recent years, DER SPIEGEL has complete two projects with the support of the Bill & Melinda Gates Foundation and the European Journalism Centre (EJC): “Expedition BeyondTomorrow,” about global sustainability goals, and the journalist refugee project “The New Arrivals,” which resulted in several award-winning multimedia features on the issues of migrants and refugees.