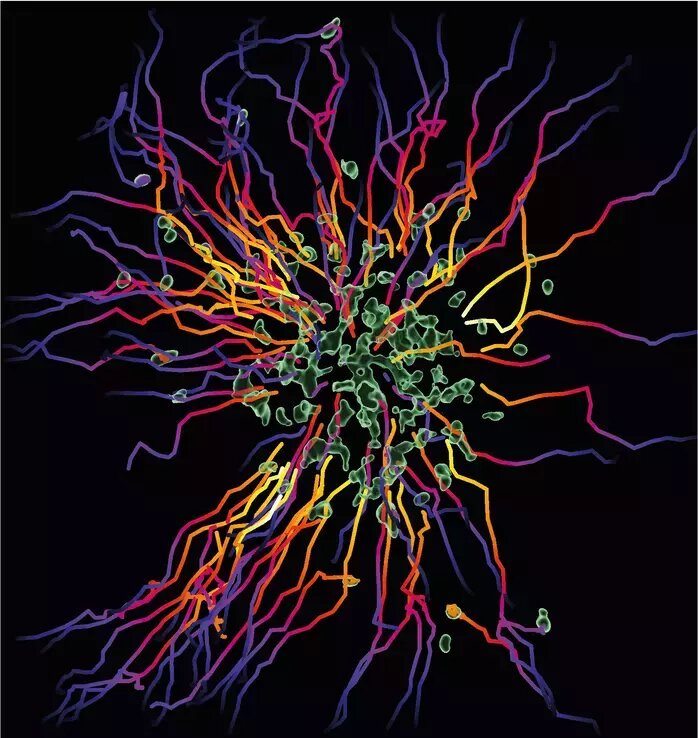 Neutrophils belong to the first to respond to our immune system. They circulate through our body and hunt in infected tissues to ingest, kill and digest harmful pathogens. To become such effective killers in the very complex situation of an inflamed tissue, they work together as a collective. They release chemical signals to attract other cells to form groups of cells and attack like a swarm. Researchers at the Max Planck Institute for Immunobiology and Epigenetics in Freiburg decipher the basic biology of neutrophil swarming and now show that cells also developed an intrinsic molecular program to self-limit their swarming activity. The study clarifies how swarm neutrophils become insensitive to their own secret signals that bound the swarm in the first place. This process is crucial for the efficient removal of bacteria from tissues.

The body is well protected from invasive pathogens by barriers such as the skin. But if you injure yourself and break your skin, pathogens can easily enter the body through the wound and cause serious infections. If this happens, the innate immune system takes over the first rapid defense with an effective arsenal of cellular weapons infiltrating the wounded. fabric in large numbers. As one of the first cell types in situ, neutrophil granulocytes are recruited within hours from the bloodstream to the site of infection to eliminate possible microbial invaders.

“Neutrophils are very efficient at hunting and killing bacteria,” says Tim Lämmermann. The group leader at the MPI of Freiburg Immunobiology and Epigenetics is studying this important cell type. Neutrophils are very abundant cells which make up about 50-70% of the white blood cells in the human body. It is estimated that 100,000 million neutrophils are produced every day from bone marrow stem cells in an adult. “These cells patrol almost every corner of our body and are very efficient at detecting anything potentially harmful to our body. Once neutrophils detect damaged cells or invade microbes in the tissue, they begin to secrete attractive signals that they act through cell surface receptors on neighboring neutrophils to recruit more and more cells. ” By using this intercellular communication, neutrophils can act together as cell groups and effectively coordinate the elimination of pathogens as a swarm.

A fine line between host protection and tissue destruction

However, this form of beneficial inflammation can also overcome and cause massive tissue damage. If the intensity or duration of the response is deregulated, the same mechanisms that serve to eliminate invasive pathogens can also cause collateral damage to healthy tissues. For example, substances that neutrophils release to kill invasive pathogens also erode the protein and sugar network, which provides structural support to tissues. “In this study, we started with the question of what stops the swarm response to prevent uncontrolled neutrophil buildup and prevent excessive inflammation, which can contribute to degenerative diseases such as cancer, diabetes and autoimmune diseases. “, says Tim Lämmermann. In previous studies, he and his team had already discovered the molecular mechanisms that initiated collective swarming behavior. However, the processes that end this response have been unknown.

The neutrophil swarm is still a relatively new topic in the fields of research on inflammation and infection, and the underlying mechanisms are just beginning to be investigated. Tim Lämmermann’s most recent laboratory study now reveals how neutrophils self-limit their swarm activity in bacterially infected tissues and thus balance the search and destruction phases for efficient pathogen removal.

By using specialized microscopy for real-time visualization of immune cell dynamics in living mouse tissues, the researchers show that swarm neutrophils are not sensitive to their own secreted signals that initiated the ‘swarm in the first place. “We identified a molecular rupture in neutrophils that stops their movement, once they detect high concentrations of accumulated swarm attractors in large neutrophil clusters,” says Tim Lämmermann. “This was surprising, as the dominant view suggested that external signals released from the tissue environment are critical for stopping neutrophil activity in the resolution phase of inflammation,” says Wolfgang Kastenmüller, a fellow scientist. researcher in the Max Planck Immunology Systems research group at the University of Würzburg.

In light of the start-stop system discovered in neutrophils, the researchers re-evaluated current views on how neutrophils navigate tissues to efficiently eliminate bacteria. In experiments with neutrophils that did not have the stop mechanism, the team observed that immune cells overpopulated and scanned large areas of tissue infected with bacteria, which contrasted the behavior of the cells with the start-stop system in operation. However, this amplification and amplified scanning did not make these cells better pathogens. “Surprisingly, we made the opposite finding. It ‘s not beneficial when neutrophils move too fast and run like crazy. Instead, they find it more advantageous to stop and enjoy a good meal of bacteria together; this is more efficient at containing bacterial growth in tissues, ”explains Tim Lämmermann.

With these results, the team paves the way for a better understanding of neutrophil biology, which is essential for the defense of the immune host against bacteria and which could inform therapeutic approaches in the future. In addition, swarm behavior and underlying mechanisms could also inform other categories of collective and self-organizing behavior of cells and insects.

The unexpected repair function of neutrophils