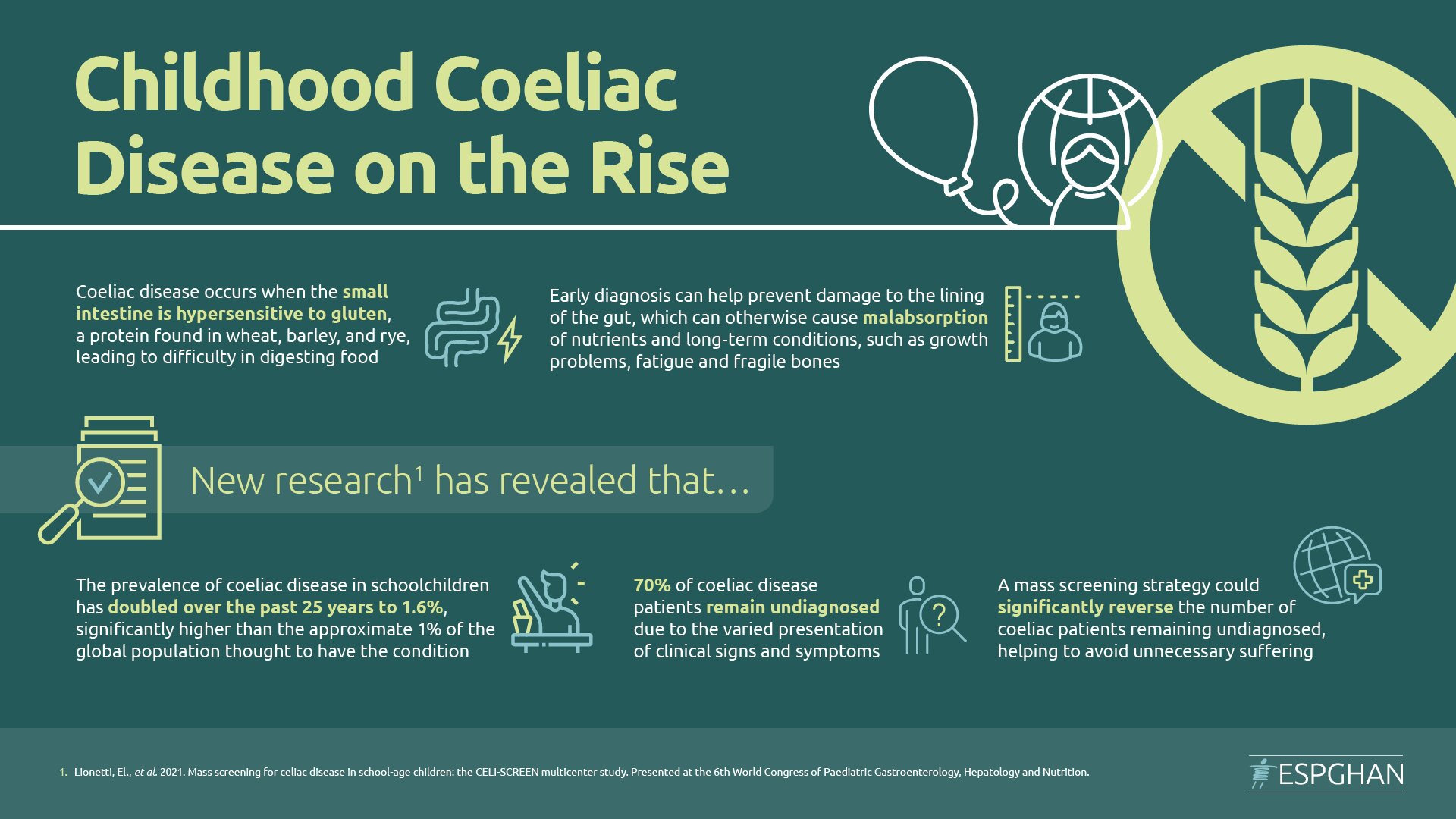 According to a new study presented today at the 6th World Congress of Gastroenterology, Hepatology and Pediatric Nutrition, the mass screening of school-age children has led to the diagnosis of a significantly higher number of cases of celiac disease.

Researchers in Italy found twice as many cases of autoimmune disease—Where the body produces antibodies to gluten, a protein found in wheat, barley and rye – school children compared to a similar study by the same group 25 years ago.

A new 7,760 screening program children from five to eleven years in eight provinces of Italy found that the overall prevalence of celiac disease it was 1.6%, well above the approximately 1% of the world’s population currently considered to be affected by the disease. Children were examined with a fingertip blood test to detect genetic mutations in human leukocyte antigens (HLA) that predispose a child to developing celiac disease. If they tested positive, it was checked if the children had antibodies against gluten. The diagnosis was then confirmed using the ESPGHAN (European Society of Pediatrics, Gastroenterology, Hepatology and Nutrition) criteria.

The lead author of the multicenter CELI SCREEN trial, Professor Elena Lionetti, says the study showed that screening in childhood leads to diagnosing more cases of celiac disease than to standard care (where the test is done in children if they show symptoms or are detected due to a family history of the disease).

“Our study showed that the prevalence of celiac disease in schoolchildren has doubled in the last 25 years compared to the figures reported by our team in a similar school age group,” says Professor Lionetti. “Our feeling is that there are more cases of celiac disease than in the past and that we could not discover them without a detection strategy.”

“Currently, 70% of patients with celiac disease are undiagnosed and this study shows that they could be identified significantly more and, at an earlier stage, if childhood screening was performed with noninvasive screening tests. gluten avoidance could potentially prevent damage to the villi (finger-like projections lining the gut), which can lead to nutrient malabsorption and long-term conditions such as growth problems, fatigue and osteoporosis (a fragile bone condition). ” .

“The study has shown that screening is an effective tool for diagnosing celiac disease in children that can help prevent many unnecessary suffering from what can be a difficult condition to detect.”

Commenting on the research, Tunde Koltai, who is chairman of AOECS (Association of European Celiac Societies) and patient representative of the ESPGHAN Public Affairs Committee, added: “This new study adds to the growing base of evidence that the number of people in Europe with celiac disease is increasing, but there are still many who are not yet diagnosed. It is essential that we adopt an effective method. projection a strategy for celiac disease across Europe to ensure that children and the general population are diagnosed as soon as possible so that they can have the best possible quality of life. “

Celiac disease is caused by the body producing antibodies against gluten, a protein found in wheat, barley and rye and used to make foods such as bread, pasta, cookies, cakes and some cereals for to have breakfast. Antibodies damage the intestinal lining causing symptoms such as swelling, pain, diarrhea, anemia, and other conditions related to nutrient malabsorption, including fatigue, anemia, osteoporosis, and fertility problems. In infants and children, celiac disease can cause abdominal pain, swelling, and vomiting, as well as cause poor growth and delay puberty.

Celiac disease is one of the most common lifelong conditions in European countries. Following a strict gluten-free diet is an effective treatment that causes the disappearance of symptoms and the progressive healing of intestinal damage.

Early introduction of gluten can prevent celiac disease in children

Provided by the European Society for Pediatric Gastroenterology Hepatology and Nutrition

Citation: Screening reveals that cases of celiac disease in children have doubled in 25 years (2021, June 5), recovered on June 5, 2021 at https://medicalxpress.com/news/2021-06-screening -reveals-celiac-disease-cases.html