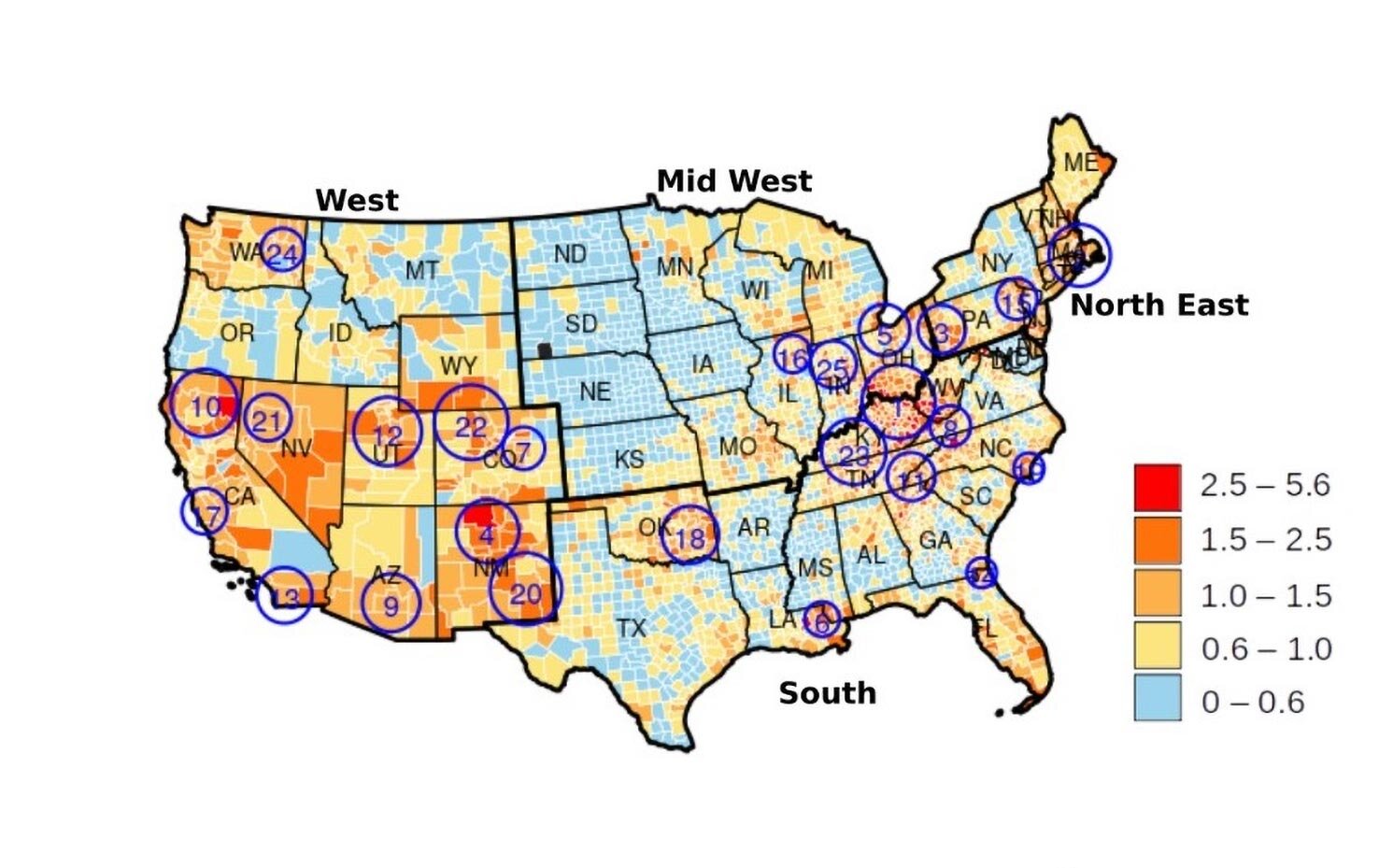 According to a new study from the University of Cincinnati, the opioid epidemic is fatally affecting people who form disproportionate groups from Cape Cod to San Diego.

Fatal opiate overdoses are the most common among six states: Ohio, Pennsylvania, Kentucky, West Virginia, Indiana, and Tennessee. But researchers identified 25 hot spots of deadly opioid overdose across the country using data from the Centers for Disease Control and Prevention.

The study demonstrates how the problem of substance use disorders can be generalized and localized, said UC assistant professor and co-author Diego Cuadros.

Cuadros is director of the UC Health Geography and Disease Modeling Laboratory, which applies geographic information, perspectives, and methods to the study of health, disease, and health care. As an epidemiologist, he studies the impacts of diseases such as malaria, HIV and COVID-19.

“Not everyone takes a similar risk,” Cuadros said. “We wanted to identify traits that put people at higher risk for fatal overdose.”

Health interventions for opiates have largely focused on treatments such as the distribution of naloxone and other life-saving remedies. But Cuadros said prevention could be effective if vulnerable populations can be identified. To this end, the researchers found that white males aged 25 to 29 years were at the highest risk of suffering a fatal opioid overdose, followed by white males aged 30 to 34 years.

The study also found a correlation between fatal overdoses and mental and physical distress through surveys of physically and mentally unhealthy days. Mental distress increases the relative risk of dying from drug overdose by up to 39%.

“We saw a strong partnership with mental health and substance abuse disorders, especially opiates, “Cuadros said.” What is happening now is that we are more than a year in a pandemic. Mental health has deteriorated for the entire population, which means we will see an increase in opiate overdoses. “

Researchers are trying to understand why men are more likely than women to suffer from a deadly disease overdose and what makes the period of life between 30 and 45 years that makes people more susceptible to the epidemic.

“Maybe you have more responsibilities, financial responsibilities or stress at the time. Maybe there are physiological changes or changes in our brain that we don’t know yet,” Cuadros said.

“This is a complex epidemic. For HIV we have a virus or agent. The same with malaria. The same with COVID-19. It’s a virus,” Cuadros said. “But with opioids, we have several agents. At the beginning of the epidemic it was heroin. In 2010 it was switched to prescription opiates.”

The study also tracked overdose migration between 2005 and 2017 from southwestern to northeastern states. Many of the UC clusters identified in the southwest and northeast had comparatively higher physical and physical levels. mental anguish.

Co-author Neil MacKinnon, a former dean of UC’s James L. Winkle College of Pharmacy, said the analysis could help policymakers and health care physicians by identifying factors at the individual and community level. associated with an increased risk of death due to a substance use disorder. He is now scheduled to attend Augusta University, Georgia.

“We expect the risk factors we identified in this analysis to be used by agencies like RecoveryOhio to plan proactive strategies and allocate resources to deal with this epidemic,” MacKinnon said.

“We started in Ohio. We know that in this state we suffer from one of the highest burdens of the problem,” Cuadros said.

Similarly, he said it would be worthwhile to study populations in the United States where opioids do not demand a terrible toll on families to understand the problem.

More information:
Andrés Hernández et al, “Know your epidemic, know your answer”: epidemiological assessment of the crisis of substance use disorder in the United States, PLOS ONE (2021). DOI: 10.1371 / journal.pone.0251502

Provided by
University of Cincinnati