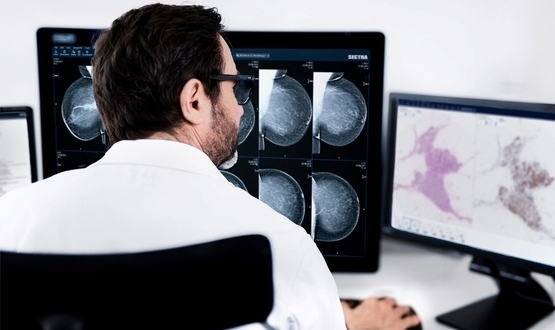 The region will be the first in the UK to combine pathology and radiology images and reports in this way and it is hoped the system will modernize and digitize diagnostics for healthcare professionals and patients.

Implemented by the Business Services Organization (BSO ITS), the digital pathology project is part of Northern Ireland’s Picture Archiving and Communication System (NIPACS), which already helps radiologists make decisions, and will now also help pathologists to respond to growing demand.

Workloads and turnaround times have already been impacted by the new system.

Dr Clare McGalie, who is responsible for the project, said: “I am very impressed with the system which is helping us to come together as a region. We now have the potential for our four laboratories to act as one virtual laboratory.

“Annotation and measurement tools are particularly useful for skin and breast reporting. Remote working and home working is important in making our workforce more mobile and flexible. There is a lot of work underway worldwide to bring forward AI in pathology. With our digital pathology system, we will be ready to embrace that in Northern Ireland. ”

With the region’s pathologists performing around 40 million diagnostic tests every year, the digital system has been implemented across four Health and Social Care trusts in Northern Ireland and means pathologists can instantly access high quality digital images from almost anywhere.

Radiologists in the region can also use the Picture Archiving and Communication System (PACS) to examine x-rays, ultrasounds, CT scans, MRIs and more.

The implementation of the digital pathology project was supported by medical imaging supplier Sectra.

Jane Rendall, managing director for the UK and Ireland at Sectra, added: “Northern Ireland is a fantastic example of integrated diagnostics in practice at a time when hospitals across the UK are seizing the opportunity to modernize diagnostics. We are proud to be a long term partner for Northern Ireland in its journey, and it is rewarding for our teams to see clinical and patient benefits being realized so quickly. We hope this is only the start of a continuing journey of innovation and inspiration. ”

Northern Ireland pathology services were initially modernized thanks to a contract with CliniSys, to deploy a single laboratory information system to five of the country’s trusts and the blood transfusion service.

In another landmark deal with the country, Northern Ireland signed a £ 275m deal with EPIC for the provision of electronic patient records.