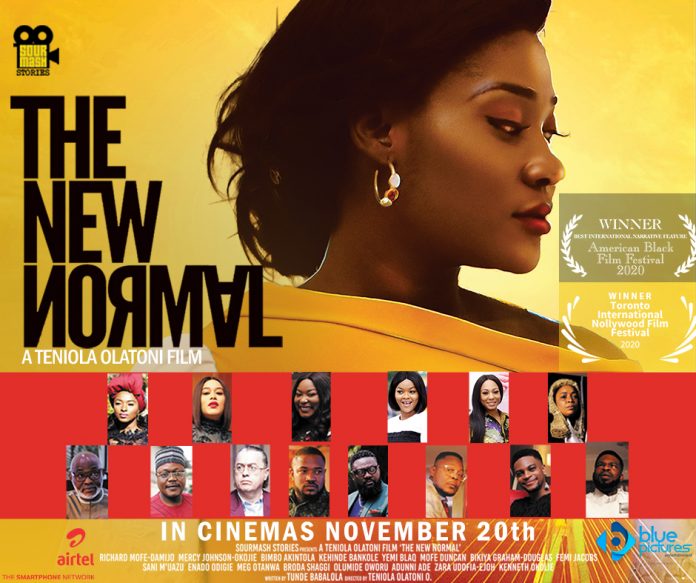 The New Normal revolves around the lives of four couples and a single friend as they navigate individual and collective issues of discrimination, misogyny, addiction, mental health, infertility and nepotism while trying their best to keep up appearances and escape society’s suffocating boots with their often hilarious and always surprising results; thus finding their way to a whole New Normal.

The movie premiere kicked off with an exclusive red-carpet segment hosted by popular media personality Denrele Edun, as guests enjoyed canapés, cocktails, photographs and conversations. The screening began with the opening speech from director and producer, Teniola Olatoni who welcomed everyone and appreciated the effort of the cast, crew and the movie partners.

Although Olatoni has directed some very successful stage plays, The New Normal marks her feature film directorial debut. Speaking on the interest the movie title has garnered, Olatoni revealed that when she created The New Normal, “it was to use different scenarios to highlight critical, but little talked about issues that many of us face in our society, the things we take for granted that many others wouldn’t dare. We had no idea what was coming” she said.

“Today, the world is collectively facing the biggest challenge of our lifetime and a new normal is fast becoming our reality. What exactly is The New Normal? Whose normal is it anyway?”

As the movie screened to the eclectic audience, there was no mistake that Olatoni’s first big screen delivery was an instant hit among the star studded audience. The screening ended with a loud ovation as the filmmaker came on stage for the curtain call and used the opportunity to express her profound gratitude to the guests. While there’s been a lot of talk and awareness before now, the premiere marked the first time the movie was aired to the public.

Understanding today’s physical distancing realities and more, producer of the movie Tobi Olanihun revealed that Nollywood fans all over the world can see the film on demand, from the comfort of their devices at  http://thenewnormal.eventive.org/

Further reproduction or distribution beyond the intended recipient is prohibited without the Owner’s prior written consent. Including this disclosure. Story.KissPR.com