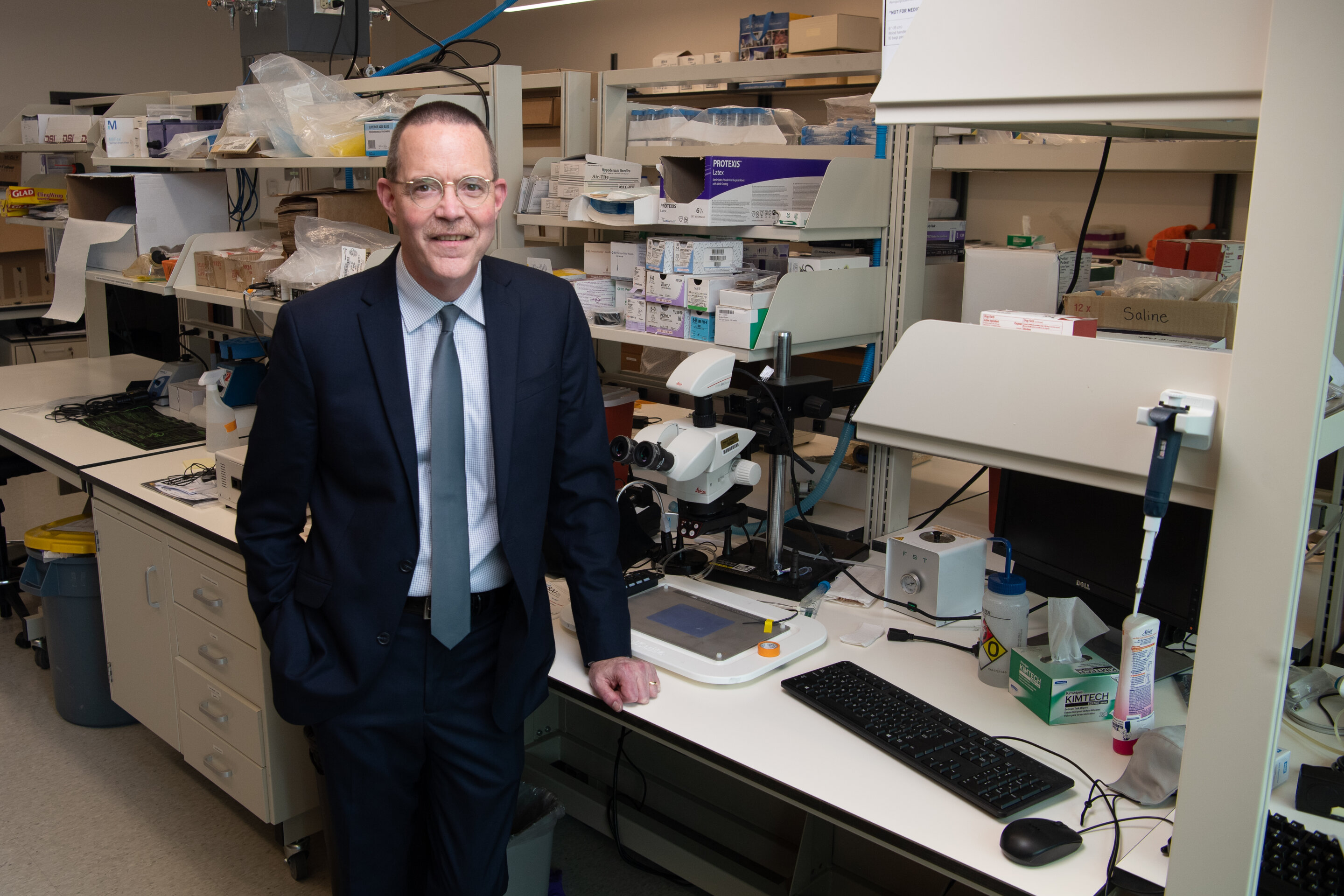 If a newborn is moved or becomes agitated while on a ventilator, the breathing tube also could move. Just a few seconds with the tube in the wrong position might lead to a critical lack of oxygen to the brain, possibly resulting in lifelong disability or brain damage or even ending the baby’s life.

The incident is far too common. Unplanned extubation—when a breathing tube accidentally becomes dislodged from the trachea—affects 75,000, or about one in five, newborns on ventilators each year, an analysis by Premier Data Services found. A medical device born out of Purdue University could save these babies’ lives by helping to keep their breathing tubes at the correct depth.

In 1990, George Wodicka had just started as a professor at Purdue when a local pediatric cardiologist came to him describing how the problem was affecting babies and nurses in her hospital. Since 2016, five neonatal intensive care units in the U.S. have been using what Wodicka and his students later invented as a solution: the first and only FDA-approved medical device that alerts nurses when a baby’s breathing tube is in the wrong position or obstructed.

To make the device available to babies in every NICU, one of the world’s largest medical technology companies, Medtronic, recently added the Purdue invention to its product line as the SonarMed Airway Monitoring System on May 10. The company adopted the technology through its acquisition of SonarMed Inc. in December, a startup Wodicka co-founded to bring the device to market.

Medtronic’s extensive market presence puts the SonarMed airway monitor on its way to becoming the standard of care for all babies requiring breathing assistance. But finding a way to get this life-saving solution to babies didn’t come without a fight.

The device not only required a breakthrough in biomedical acoustics, but also a 30-year battle against the unfortunate reality that it is much harder to bring new technology to the NICU than it is to the ICU.

As of 2020, the global NICU market stood at $1.5 billion, significantly smaller than the $5.5 billion global adult ICU market. A smaller market size means less investment in the most advanced technology for the tiniest of babies.

“The pediatric space is so underserved. I only have one 30-year project in me—this one was it,” said Wodicka, who is now the Dane A. Miller Head of Purdue’s Weldon School of Biomedical Engineering, and a professor of both biomedical and electrical and computer engineering. “Such future research and development efforts need to take a few years, not a few decades, to broadly reach children in need.”

Minimizing the number of X-rays done on ventilated newborns

Similarly to 30 years ago, NICUs typically use X-rays to check that a breathing tube is in the correct position or to detect a blockage, such as mucus. But it’s as easy to accidentally place the tube too deep, which could puncture the baby’s bronchus, as it is for the baby to squirm the tube out of the correct position.

If the baby’s movement affects the tube’s placement, an X-ray has to be taken all over again—often daily. Each unplanned extubation in pediatric patients can lead to hospital costs of $36,692, a study found, and lengthen a baby’s stay in the hospital by more than six days.

“These babies were constantly having X-rays taken to locate where the tube was placed. And I told George that if we had a way to know where the tube is without taking an X-ray, it would be very good both for the baby to not get all that radiation and for the cost,” said Barbara Bourland, who in 1990 was a pediatric cardiologist at Home Hospital in Lafayette, Indiana. Bourland met Wodicka through her late husband, Joe Bourland, a professor and biomedical engineer at Purdue who had recruited Wodicka to come to the university.

Wodicka’s expertise in biomedical acoustics led him to consider the feasibility of using soundwaves to guide the placement of a baby’s breathing tube, sparing the baby from an X-ray every time the tube moves out of place or gets blocked.

Huntington Hospital in Pasadena, California, was the first to use the SonarMed airway monitor in its NICU. Since adopting the device in 2016, the NICU’s rate of unplanned extubations has dramatically decreased and X-rays almost never have to be taken to check the placement of an endotracheal tube.

“We don’t want to disrupt the little guys unless we have to. With the SonarMed airway monitor, we can very easily detect something before it becomes a problem and minimize the amount of time that we have to interact with the baby,” said Jamie Powers, medical director of the NICU at Huntington Hospital.

Shortly after adopting the SonarMed airway monitor, Huntington Hospital’s NICU was tasked with treating a baby bleeding into her lungs. The device helped the staff identify and adequately suction out the baby’s blood clots without causing more trauma to her lungs, allowing the baby to breathe on her own within a day.

The long road to continuously monitoring babies’ airways through soundwaves

What makes the SonarMed airway monitor effective is its revolutionary use of soundwaves that aren’t used in other medical devices. Ultrasound waves, the most common use of acoustics in medicine, wouldn’t stay within a baby’s breathing tube. But the human body is already good at localizing the soundwaves that do.

“When I got interested in sound, this was back in the days when people like me built their own stereos and speakers,” Wodicka said. “Over the years, my research has focused on using sound in novel and creative ways to monitor health and well-being for some unmet clinical need.”

Creating soundwaves that can stay within a baby’s endotracheal tube ultimately required building a device with a tiny speaker on one end and two sensing microphones—initially adapted from hearing aids—on the other end. Sound travels from the speaker in the device to the end of the connected endotracheal tube. The SonarMed airway monitor software measures the soundwaves that echo back through the microphones, informing clinicians on a screen in real time where the tube is located and whether there is an obstruction.

Building the initial Purdue prototype took 15 years. Jeff Mansfield, now chief technology officer of SonarMed, was the first graduate student whom Wodicka hired to work on this project. Mansfield spent both his master’s and his Ph.D. years developing the technology—and would continue building multiple prototype iterations to create the device that is used in hospitals now.

Downsizing technology for the underserved and tiniest of humans

In 1997, then-Purdue Ph.D. student Eduardo Juan, who is now a professor of electrical engineering at the University of Puerto Rico at Mayagüez, worked to miniaturize and automate the acoustic guidance system that Mansfield had started. Juan’s research would lay the groundwork for making the device, which had started off bigger than a breadbox, small enough for babies in the NICU.

“The system wasn’t really clinically feasible at the time. So when I came on to the project, my job was to actually take everything that Jeff had done so far and make it small,” said Juan, who would continue serving on SonarMed’s board of directors until the startup’s acquisition by Medtronic.

But first, the researchers would have to test the technology in adults. The FDA approval process for medical devices is less burdensome for adults than for NICU babies, and the technology needed to undergo testing in adults before it could be made even smaller for babies.

Advancing the technology further required starting a company. In 2005, Wodicka, Mansfield and Juan founded SonarMed together with Greg Ayers, who had earned both his bachelor’s and doctoral degrees in engineering from Purdue and saw the device’s potential for commercialization. The Purdue Research Foundation Office of Technology Commercialization licensed the acoustic guidance technology, which by then had two U.S. patents, to SonarMed for commercial development. Ayers was SonarMed’s first CEO.

The researchers wouldn’t get FDA clearance for testing the technology in adults until 2010. But SonarMed was on the brink of bankruptcy.

An unlikely success in bringing new technology to the NICU

In 2012, Tom Bumgardner became the CEO of SonarMed in the midst of the startup’s financial troubles and lack of success breaking into the NICU market. He and his business partner, David Gunn, worked to save SonarMed from collapse.

Bumgardner and Gunn had talked the rest of SonarMed leadership into working for free for several months while they focused on getting the financial capital the startup needed.

“We would raise more money and try to make progress, have to cut salaries. … It was a hard road. We got down to where we had just $5,000 in the bank a couple times along the way. I had a daughter in college and didn’t know how we were going to pay for anything,” Bumgardner said.

Under Bumgardner’s leadership, the technology finally got tested in adults at the University of Texas MD Anderson Cancer Center. The device then had to undergo a series of upgrades to resolve remaining issues, such as inventing a mucus-proof sensor that could monitor the endotracheal tube without needing to be cleaned or replaced. Sven Schreiber, who got his bachelor’s degree from Purdue in mechanical engineering, led work as SonarMed’s director of operations redesigning the device to make it more manufacturable and aesthetic.

But despite the device’s promises and success in adult clinical trials, there remained the challenge of convincing hospitals to use it—even though not even the ICU had technology that could continuously monitor obstruction and positioning of breathing tubes.

The much more dire effects of unplanned extubations in babies compared with adults ultimately convinced hospitals to give the SonarMed airway monitor a try.

“We had started going to ICUs to show them the SonarMed airway monitor and they would say, ‘Well you know, we kind of have a problem, we kind of don’t,’ and everybody understood it. But then we started talking about the NICU, and everybody got it and wanted it,” Bumgardner said.

The SonarMed airway monitor’s quick impact at Huntington and other hospitals attracted the attention of Medtronic, which officially partnered with the startup in 2016. In 2018, Medtronic began investing in SonarMed, believing that the tool would bring more value to NICUs.

“It was a dream come true. I’ve spent over half my life working on this,” said Mansfield, who at one point took off to Wyoming for four months, skiing during the day and tinkering with the prototype at night. “And when we finally found out that we had gotten this to a place where it can get out to all the babies of the world who need it, I started crying. It hit me like a ton of bricks.”

Quality initiatives can reduce harm to newborns, shorten hospital stay and save millions

Citation:
Newborns on ventilators can now be better protected from a common breathing tube incident (2021, June 9)
retrieved 9 June 2021
from https://medicalxpress.com/news/2021-06-newborns-ventilators-common-tube-incident.html