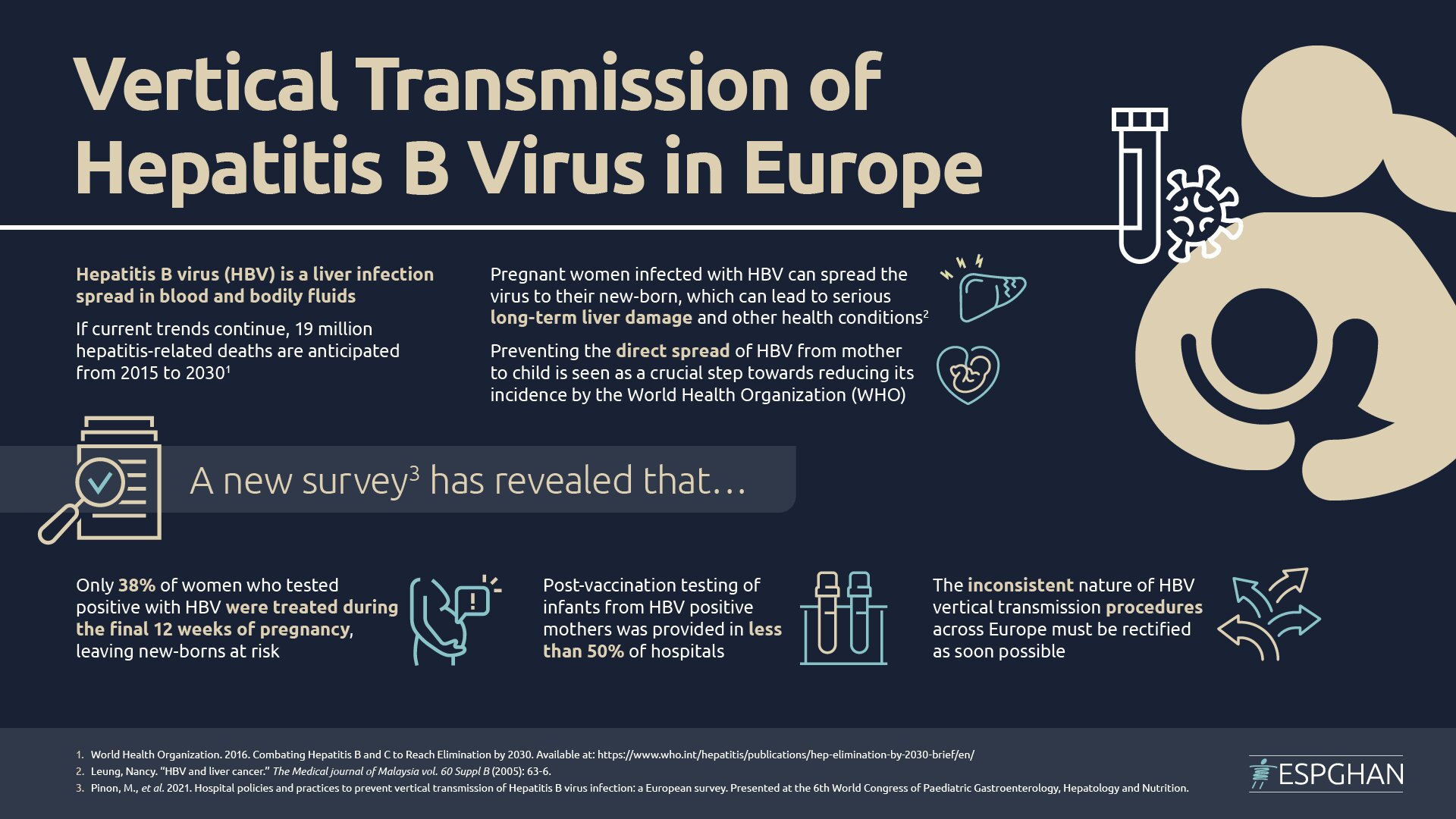 A new survey presented at the 6th World Congress of Gastroenterology, Hepatology and Pediatric Nutrition has shown that procedures to prevent direct transmission of the hepatitis B virus (HBV) from mother to child, especially during and after pregnancy, they have significant fragmentation and gaps.

The results, based on 76 hospitals in parts of ten major European countries, identified significant variations in the frequency of maternal HBV screening during pregnancy: 53% in the first trimester, 1% in the second trimester, and 46% in the third trimester. Alarmingly, only 38% of women who tested positive for high HBV DNA levels were treated during the last 12 weeks of pregnancy, although the vast majority of centers (88%) had written protocols. to prevent the transmission of HBV infection from mother to child. .

Preventing the direct transmission of HBV infection from mother to child is seen as a crucial step towards reducing its incidence as part of the global health strategy of the World Health Organization (WHO). ) to eliminate viral hepatitis as a major public health threat by 2030. Yes current trends continue, 19 million hepatitis-related deaths are projected from 2015 to 2030.2. By identifying barriers and challenges, this research represents a key step towards preventing this outcome and towards full adherence to the international guidelines of European countries.

The new survey also found that less than half of the centers provide post-vaccination testing for HBV-positive infants, although 10-20% of vaccinated babies still acquire HBV when their mothers had high levels of the virus. . This means that infected children, despite being immunized, may not be diagnosed. This is particularly significant in cases where the determination of HBV status occurs in the third trimester, which may be too late to initiate antiviral therapy in women with high levels of HBV DNA. To further group this issue related to the disclosure, inconsistency has been reported in all centers at the time of the HBV vaccination schedule.

The lead author of the research, Michele Pinon, of the University of Turin, commented: “This survey provides a strong indication that there are significant differences and gaps in hospital policies and procedures to prevent direct transmission of HBV from mother to child. across Europe. There is a clear need to implement a multidisciplinary clinical pathway involving obstetricians, neonatologists and hepatologists, with a stronger connection between the earlier stages, during and after birth. “

The web-based survey, with support from the Penta Foundation and distributed by INCIPIT (Italian Network of Pediatric Clinical Trials), focused on prevention strategies adopted before, at and after birth. A single response was provided in response to the survey by the most experienced physicians from each of the 76 participating hospitals.

Speaking to the survey, ESPGHAN Hepatology Committee Chairman Giuseppe Indolfi, who also participated in the research, stated: “The inconsistent and inconsistent nature of HBV vertical transmission prevention practices in the whole of Europe revealed by this survey is a considerable cause of “Procedures must be corrected as soon as possible as we achieve the WHO goal of eradicating the threat of viral hepatitis by 2030.”

Prevent the transmission of hepatitis C from mothers to babies

Provided by the European Society for Pediatric Gastroenterology Hepatology and Nutrition