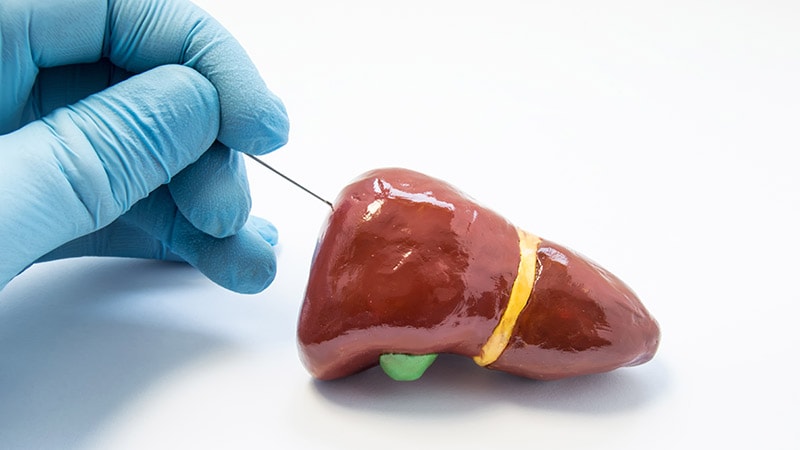 Non-alcoholic fatty liver disease (NAFLD) was present in approximately two-thirds of patients who did not have a liver biopsy. These patients were more likely not to be white and older, in addition to having normal ALT levels, which shows possible gaps in the knowledge of this population.

Data from studies of patients diagnosed with NAFLD that require biopsy among their inclusion criteria may be subject to selection and screening bias, wrote A. Sidney Barritt, MD, of the University of North Carolina at Chapel Hill, and colleagues. The researchers attempted to compare the characteristics of patients with NAFLD who were diagnosed with clinical criteria and those diagnosed by liver biopsy.

In a study published in Hepatology Communications, researchers reviewed data from TARGET-NASH, a longitudinal observational cohort study designed to follow patients with NAFLD in clinical practice to provide data on the effectiveness of treatments.

“TARGET-NASH represents a large cohort of patients with NAFLD from multiple sites and can provide us with real-world information on disease progression in patients with NAFLD and particular risk factors that may be clinically relevant,” Zachary Henry, MD, MS, from the Division of Gastroenterology and Hepatology at the University of Virginia Health System in Charlottesville, said in an interview. “This is one of the first studies in this database, and as time goes on, we will see more data from large populations like this to answer specific questions for patients with NAFLD.”

The researchers included 3,474 patients aged 18 years and older who were enrolled in the TARGET-NASH study between August 1, 2016 and March 4, 2019. Study participants were classified according to the severity of liver disease: non-alcoholic fatty liver (30%), non-alcoholic steatohepatitis (37%) and NAFLD cirrhosis (33%).

A total of 766 patients with NASH were diagnosed according to clinical criteria without biopsy and all met the image-based abnormal ALT and steatosis criteria. In addition, these patients had at least one secondary diagnostic criterion: body mass index greater than 30 kg / m2 (74%), type 2 diabetes (42%) and dyslipidemia (54%). Significant independent predictors of liver biopsy included younger age, white race, female gender, diabetes, and elevated ALT levels.

Elevated ALT increased the chances of liver biopsy by 14% for every 10-point increase, according to the study. A machine learning model showed that non-white patients with ALT less than 69 IU / ml had a 6% chance of liver biopsy. In comparison, white patients had a 21% chance of biopsy with ALT between 29 IU / ml and 69 IU / ml that dropped to 10% if the ALT was less than 29 IU / ml.

However, ALT remains a “suboptimal substitute” for the severity of the disease, the researchers noted. “The way a normal ALT is defined and how a normal ALT range can vary in different laboratories can play an important role in its usefulness as a diagnostic tool.”

Henry was surprised by this finding: “With the advent of noninvasive measures of fibrosis, such as the NAFLD fibrosis score, Fibrosis-4 and transient elastography, I thought these would play a more significant role in this decision compared to the ALT levels. “

In particular, mental health diagnoses accounted for almost half (49%) of comorbid conditions, followed by cardiovascular disease (19%) and osteoarthritis (10%). The prevalence of these conditions places emphasis on the challenges of managing NAFLD patients with diet and exercise alone, as mental and physical problems can impede progress, the researchers wrote.

The researchers noted that the results of the study were limited by several factors, including the inability to determine the intent of the health care provider, as well as undocumented factors related to patients and providers that could influence a biopsy decision. such as assessing the severity of the disease. In addition, they noted that the predominantly white studied population treated in specialized settings may not be generalized to other populations or primary care.

However, the results are reinforced by the large population studied and the real-world context, the researchers stressed. “These data provide context for the selection bias that may be present in many randomized, controlled trials and trials of therapies for NAFLD, where biopsy is required for inclusion,” and show possible lack of knowledge about the patient population. less likely to undergo a biopsy.

Gaps and implications of knowledge

The study is important because of the need to identify factors that predict patients’ histological versus clinical diagnosis of NAFLD such as the number of patient records and clinical trials to increase NAFLD, Bubu Banini, MD, of Yale University , New Haven, Conn. an interview. “This information helps elucidate selection and finding bias and place the findings of NAFLD records and clinical trials in context.”

Banini said some of the findings had to be expected, while others did not.

“Historically, men and non-whites are less likely to participate in clinical records and trials, compared to women and whites. However, I was surprised that these discrepancies were parallel to the likelihood of undergoing a biopsy. liver disease even among those who chose to participate In addition, although mental health disorders (such as anxiety and depression) are a fairly prevalent comorbidity in patients with NAFLD, I was surprised that patients with NAFLD with mental health disorders were more likely to have a liver biopsy compared to those who did not have these disorders. I would have expected otherwise, “he noted.

“These findings highlight the lack of knowledge about the impact of demographic and psychosocial factors on the choice and assessment of care among patients with NAFLD and the need for further studies to address these shortcomings,” he emphasized. .

“A number of [studies] such as TARGET-NASH, liver biopsy requirements to participate are removed; therefore, selection bias related to liver biopsy is less likely to be a problem [studies] if the clinical diagnosis is considered a substitute for the histological diagnosis, “Banini added.

“In contrast, many NAFLD clinical trials require liver biopsy for inclusion.” As was very well demonstrated in the current study, “this inclusion criterion may introduce selection bias,” he said. “Awareness of possible biases would serve as information for the design and recruitment strategy of clinical records and trials to overcome these problems.”

“I think the results of this study may point to a bigger problem within medicine in general, which is a difference in the care given to minority communities,” Henry said. “It is unclear whether this is intentional, related to an unconscious bias on the part of providers, or related to significant mistrust between minority communities and their health care providers,” but it is true that needs to be addressed.

He noted that the purpose of TARGET-NASH is to enroll all patients with NAFLD regardless of biopsy. “Over time, as we have more data on these patients, we will have a better understanding of diagnostic and therapeutic decisions in patients with NAFLD.”

The study was supported by Target RWE, sponsor of the TARGET-NASH study. TARGET-NASH is a collaboration of academic and community researchers and the pharmaceutical industry. Lead author Barritt had no financial conflict to disclose, but many co-authors of the study revealed relationships with several pharmaceutical companies, including those involved in the TARGET-NASH study. Banini is currently on NASH’s advisory board for Boehringer Ingelheim. Henry did not report any disclosures, although his institution is one of the registration sites for TARGET-NASH.