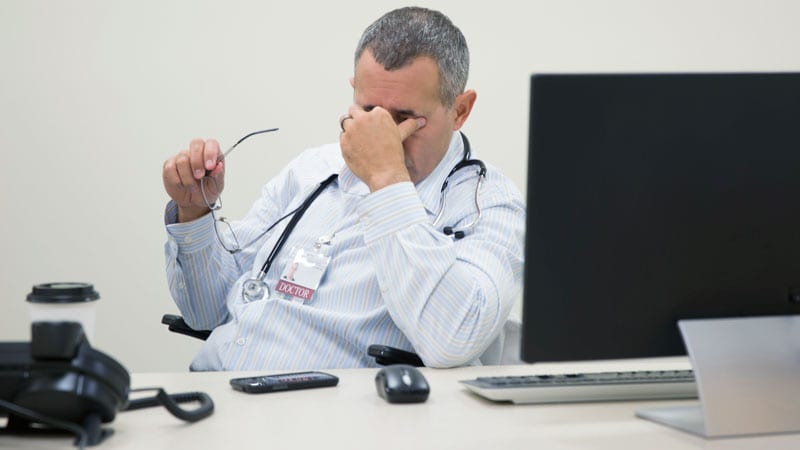 Doctors who spend less time tracing hours after hours and those who have better organizational support for their electronic medical records (EHRs) are less likely to report feeling burned out, according to a large-scale study published on April 23 in Journal of the American Association of Medical Informatics.

Among the physicians who responded to the surveys used in the study, physicians who spent 5 hours or less a week on making off-schedule charts were twice as likely to report more levels of exhaustion. lower than those presenting 6 hours or more a week.

The same was true for respondents who said their healthcare organizations had done a great job with the implementation, training and support of the EHR.

The researchers used data from the KLAS Arch Collaborative, which began in 2017 to measure and set a benchmark for the EHR clinician’s experience. (KLAS is an independent health information technology company that publishes survey results on various types of software).

Since then, more than 200 health organizations have participated in the Arch Collaborative. About two-thirds of the 25,000 physicians surveyed in the study were affiliated with academic medical centers or large health care systems and less than 5% were physicians in outpatient care practices.

In 2018, Arch added a question about doctors ’exhaustion to his survey. It also measures the graph outside of hours by asking how many hours a week doctors spend on this activity.

In the study, the likelihood of experiencing symptoms of exhaustion became more frequent with each increase in time spent making out-of-hours charts. The largest jumps occurred between 0–5 hours (57% of the sample) and 6–15 hours (35%).

Just over a third (35%) of respondents agreed that their organization provided excellent EHR support and 9% fully agreed. The study shows that the correlation with lower depletion of this cohort was independent of the number of outpatient schedule graphs made by respondents.

Overall, 30% of physicians reported symptoms of exhaustion, a considerably lower number than 42% of physicians who reported exhaustion at a recent report on the Medscape problem. The researchers said this disparity could have been related to differences in the measure of burnout and the design of the study.

The researchers did not examine how burnout correlated with the type of EHR used. More than two-thirds (69%) of respondents used the Epic EHR, followed by Cerner with 15.8%. Almost 52% of respondents had been using a EHR for five years.

Although no demographic data were available on respondents, the study used the time a doctor was in practice as an indicator of age to adjust the data for confusing factors. One-third of respondents had been practicing medicine for 25 years or more; 28.6%, during the 15-24 years; 31%, for 5-14 years; and 5.3%, during the 0-4 years.

There were significant differences between specialties in reported exhaustion, out-of-hours chart, and support for the EHR organization.

Among physicians who had an outpatient schedule for five or fewer hours per week, most specialties reported lower levels of burnout than physicians in the same specialties who had longer time out of the office. This was especially notable for gynecologists and pediatricians. Among the doctors who said their healthcare organizations had done a great job of implementing and supporting their EHR, all specialties had lower levels of burnout, especially cardiology and neurology.

Forty-three percent of physicians did 6 or more hours of weekly charts outside of hours. There were big differences between the specialties. At the top were hematology / oncology (60%), pneumology (56%) and family medicine and internal medicine (53%). At the bottom were radiology (12%), anesthesiology (14%), hospital medicine (34%) and psychiatry (37%).