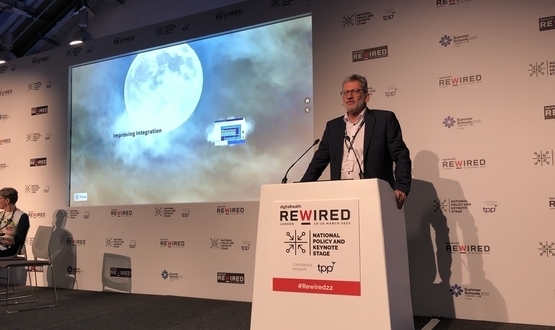 The CEO at King’s College Hospital NHS Foundation Trust has said that he believes that in this day and age, hospitals are not able to run “safely” without an electronic patient record (EPR).

Professor Clive Kay was speaking on day two at Digital Health Rewired as part of a session on the trust’s joint EPR project with Guy’s and St Thomas’ NHS Foundation Trust, which has been nicknamed ‘Apollo’. In 2020, Guy’s and St Thomas’ signed a multi-million pound deal with Epic for a new EPR and the deal was later extended to include King’s College Hospital as well as Royal Brompton and Harefield hospitals.

Prof Kay said he believes one of the “very best ways” the two trusts can be brought together for our staff and patients is ‘to have a single, joint EPR’.

“I am not sure in this day and age how a CEO can run a hospital or group of hospitals safely without an EPR and I stand by that comment,” he said.

He then went on to add: “I think the difference between a wholly digital organization and either a partial or fully paper-based system is really like chalk and cheese.”

Prof Kay was joined on stage by his Guy’s and Thomas’ counterpart, Professor Ian Abbs, who said his trust was “starting again” with its EPR and added that he believed patients want to play a “more active role” when it comes to their healthcare.

Prof Abbs also said it was a “moonshot” project – which is the term given to a type of thinking that aims to achieve something that is generally believed to be impossible.

Also taking part in the panel was Beverley Bryant, who is the joint chief digital information officer for both trusts.

Bryant, who has also held positions at System C and NHS Digital, confirmed that Guy’s and Thomas’ along is due to go live with the Epic EPR on 15 April 2023. King’s College Hospital is expected to go live on 7 October 2023.

A one team approach is going to be taken by the two trusts, Bryant told the audience but she also added that recruitment has proved difficult.

“It’s been like fishing in a small pool for skills and resources,” she said.

A solution for Guy’s and St Thomas’ and King’s College has been to “grow their own,” Bryant added.

“They can bridge that gap between technologists and front line staff,” she added.