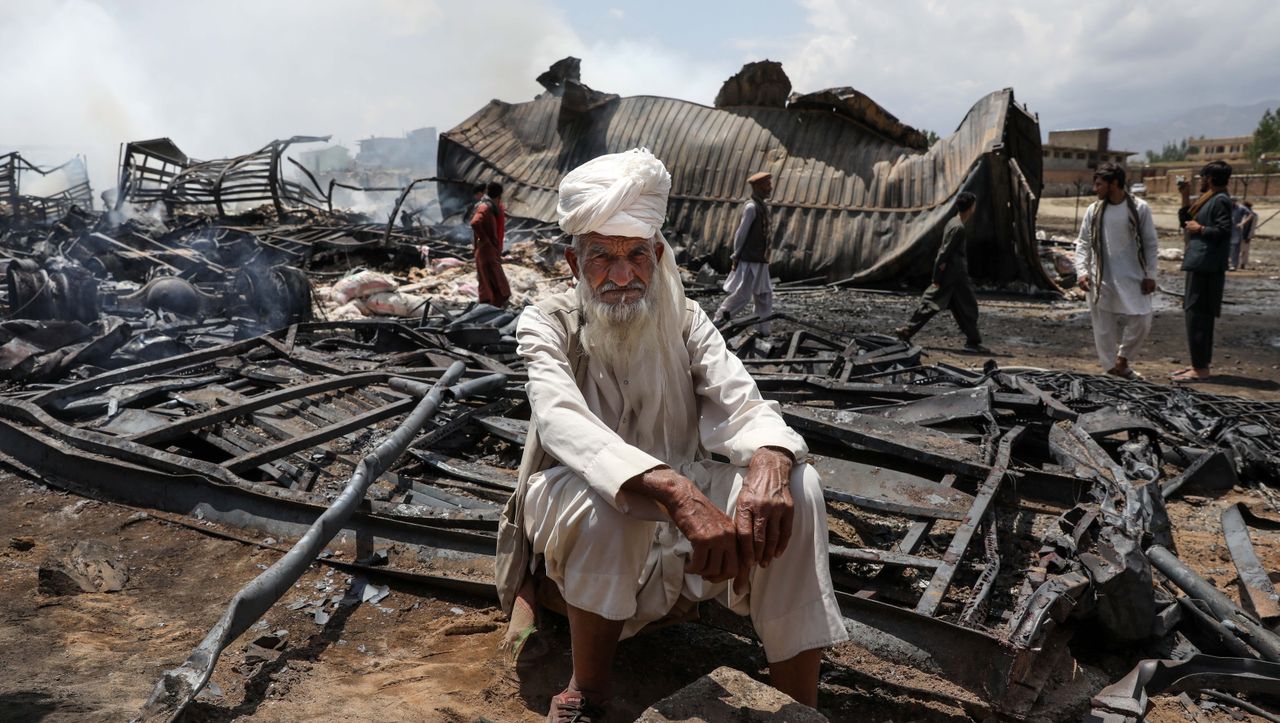 The price of a Kalashnikov in Afghanistan is considered an accurate measure of current tensions. In the last six months, that price has risen from $100 to $1,000.

Since U.S. President Joe Biden announced the withdrawal of U.S. troops by Sept. 11, many in Afghanistan have begun preparing for civil war. In their peace deal with the U.S., the Taliban agreed to reduce violence. They also agree to negotiate with representatives of the Republic of Afghanistan in Kabul over a power-sharing arrangement.

Instead, though, they launched a massive military offensive to bring more and more districts and infrastructure under their control. Constructive talks are not taking place. Ahead of a planned peace conference in Istanbul, the Taliban are demanding the release of 7,000 of their prisoners as a prerequisite. On a previous occasion, Kabul released 5,000 Taliban fighters from prison, but received nothing in return.

Recently, U.S. Special Representative for Afghanistan Zalmay Khalilzad invited members of NATO and the European Union to Berlin to discuss the state of peace negotiations between the Afghan Republic and the Taliban. Members of the radical Islamist group also joined the discussion from Doha via video link. Despite their battlefield aggression, the Taliban representatives insisted that they didn’t believe there was a military solution to the conflict.

Following the withdrawal of Western troops, the country faces the potential of a vast civil war – one that could trigger millions more people to flee Afghanistan. Those who are able are already trying to leave the country now.

“Both sides have to be realistic about finding common ground. If there is no peace agreement, the alternative is not a Taliban victory.”

DER SPIEGEL: Ambassador Khalilzad, what peace process exactly are we talking about? In Kabul and throughout Afghanistan, preparations for war are already underway.

DER SPIEGEL: Just last night, there were 142 attacks by the Taliban in the provinces of Baghlan, Uruzgan, Helmand and Kandahar. What makes you think that the Taliban are seeking a peaceful agreement?

Khalilzad: Yes, the level of violence is too high and there has been ongoing fighting. That is why the peace talks need to commence as soon as possible and as earnestly as possible. The Taliban spoke to the U.S. and the European group in Berlin this week by video. They said they don’t see a military solution and say that the only option is a political one. Both sides have to be realistic about finding common ground. If there is no peace agreement, the alternative is not a Taliban victory. It is a long war.

DER SPIEGEL: Taliban field commanders are keen to make military gains every single day. The negotiation team in Doha – with whom you and your Western allies are talking to – appear to be more diplomatic. Who is calling the shots inside the Taliban?

Khalilzad: I believe that the leadership is in control, but we will see. But there is also another important factor. If groups inside the Afghan Republic start to divide and each go their separate ways – which is a possibility, and a dangerous one – that would encourage the Taliban, perhaps the hardliners, to seek a military solution.

DER SPIEGEL: What would a “military solution” mean for the future of Afghanistan?

Khalilzad: It would mean a repeat of the tragic period of the 1990s, when Afghanistan became the scene of a proxy war following the Soviet departure. Many of the leaders of the Taliban and the other Afghan groups remember that period. They remember that terrible mistakes were made: They didn’t come together, instead they each sought an advantage for themselves and that led to a war that destroyed Afghanistan. Our expectation is that the parties won’t repeat that mistake again.

DER SPIEGEL: Are the Taliban just buying themselves time by pretending to negotiate?

Khalilzad: The proposed conference in Turkey is one test to see whether the Taliban want to end the conflict through negotiations. The Afghan government is willing to discuss another prisoner release, but they are concerned about the high levels of violence. The Turks have agreed, together with Qatar and the United Nations, to convene a meeting of the Afghan Republic and the Taliban to accelerate political negotiations. The Taliban so far have not agreed to the dates that were proposed. They said they haven’t yet received authorization from their leaders. But they do want prisoners released and they do want to be taken off the blacklist.

“War is expensive for the Taliban as well.”

DER SPIEGEL: It looks like the Taliban are just waiting until the very last American soldier leaves Afghan soil. After all, talk is cheap.

DER SPIEGEL: What leverage does the U.S. and their allies still have?

Khalilzad: The Taliban face alternative futures. One future is international legitimacy, assistance, getting off the sanctions’ blacklist, and prisoners released. But that means negotiations and agreeing to a realistic political settlement. The alternative is war. Even if they make continued gains, they’re not looking at an easy victory. And ongoing aggression on their part will mean continued isolation, not being accepted as a legitimate partner, not getting off the blacklist, no prisoners released, and the continued opposition from the international community working to prevent a military takeover. So this is a time for the Taliban to decide which path they want to take. And we are preparing ourselves, with our friends and allies, for both options. That’s the message that we have delivered to the Taliban.

DER SPIEGEL: What was their response?

Khalilzad: They say they are working on their plan for a political settlement. Kabul started with 30 plans which they have now reduced to two. The negotiations – including the meeting in Turkey with facilitators – can be used to see how these plans might fit together for the future of Afghanistan. We strongly hope the UN, Turkey and Qatar can help through active facilitation.

“The Afghan security forces are a national institution worthy of support and we will keep supporting them.”

DER SPIEGEL: Currently there is fighting in 28 of the 34 provinces of the country. What scenario should Afghans – and their allies – be preparing for?

Khalilzad: If the Taliban do not pursue a political settlement, but instead pursue a military option, despite what they say to us and to the world – that they don’t think there is a military solution – then I believe that the Afghan forces will resist and we will support them. But in fact, Afghanistan’s recent history shows that any effort of a group to impose its will on others by force leads to a long war.

DER SPIEGEL: What legacy will the U.S. leave behind in Afghanistan?

Khalilzad: The economy of Afghanistan, the infrastructure, construction, and Afghanistan’s relations with the world have all improved. Afghans have a longer life span today than 20 years ago, and more Afghans are getting educated than they ever did before. Institutions that did not exist before now exist, including the institution of the security forces. And civil society has been very active. Afghanistan has changed. And I tell the Taliban leaders with whom I speak that they need to get to know this new Afghanistan. We will not abandon Afghanistan. We will have – when the withdrawal is completed – a new chapter in our partnership. Afghanistan is going to be at the very top of the recipients of U.S. assistance, foreign assistance which includes supporting the Afghan security forces, development assistance and humanitarian assistance. And our allies say the same.

DER SPIEGEL: What will happen to the many Afghans who stood loyal with the Americans and their allies and are now afraid of being killed as so-called collaborators?

Khalilzad: The violence is bad, and our goal is to help end it through a peace agreement. In a best-case scenario, there will be national reconciliation and everyone’s energies will focus on rebuilding lives and obtaining the peace dividend. But yes, things could get worse if there is no realistic agreement and the war continues – or, God forbid, that it escalates, and past mistakes are repeated. We, for our part, will do all that we can, short of getting involved again in a war, to prevent things from devolving. All Afghans have been affected by this war. Afghans living in Taliban areas have not been spared. They have been deprived of a lot. They deserve a better chance, as well as those who have benefited from the gains of the last 20 years. We’re preparing for all potential alternatives and we are very much committed to humanitarian support as well.

DER SPIEGEL: When the Soviet Union left Afghanistan in 1989, the Afghan government only collapsed after Moscow cut its financial support and supplies. Will Western countries remain the economic life-line for the country?

Khalilzad: The Afghan security forces are a national institution worthy of support and we will keep supporting them, and providing the financial assistance that they will need. We will maintain a robust embassy. We will monitor the situation closely. We will remain a good friend of Afghanistan and continue to support it, and be ready for alternative futures.

“The Taliban have an important historic choice to make.”

DER SPIEGEL: You personally have been involved in this mission from very early on. What went wrong?

DER SPIEGEL: Pakistan has strong interests in Afghanistan and has frequently been accused of providing a safe haven to the Taliban. Is the U.S. alliance with Pakistan more important to Washington than the U.S. commitment to the Afghan people?

DER SPIEGEL: Considering that the U.S. has already announced its withdrawal and the Taliban are expected to return imminently, why should Islamabad still want to make peace with the current Afghan Republic?

Khalilzad: If this peace effort doesn’t succeed, and if there is no agreement between Pakistan and Afghanistan, Pakistan will suffer. Pakistan will be blamed because so much of the Taliban’s leadership lives in Pakistan. A failed peace also means missed opportunities for both countries. Leaders in Pakistan and Afghanistan have a common interest in economic connectivity and trade and development. And we are working hard with both, and with Central Asia, for these things. We believe peace in Afghanistan empowers that and makes that possible.

DER SPIEGEL: Last year, you helped the U.S. get out of America’s longest war. Do you think you have also done enough for the Afghans, a group of which you were originally a part?

Khalilzad: The Afghans yearn for peace overwhelmingly and they are entitled to it. I have not forgotten where I come from or who I am. But ultimately of course, the responsibility of whether this can happen doesn’t lie with me, but with the two sides, the leaders of the Taliban and the leaders of the Republic. The Afghan leaders say they have learned from the past. But we will see. Will they put their country first, will they put their people first or will they pursue some separate agenda? Will they put the future of the current generation, our future generations first? Time will tell whether they will make the right choice or repeat past mistakes. And the Taliban have an important historic choice to make.