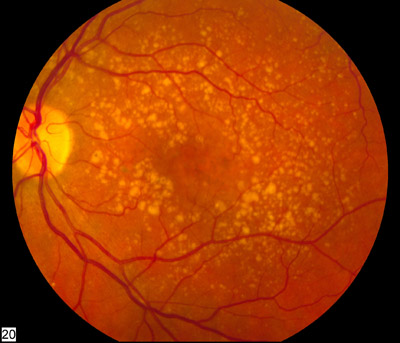 Research conducted at the Sharon Eccles Steele Center for Translational Medicine (SCTM) at the John A. Moran Eye Center at the University of Utah explains why people who carry a block of genetic variants strongly associated with the development of macular degeneration related to (DMAE) may develop the disease and identify a potential therapeutic route to slow or even reverse the progression of the disease.

AMD is one of the leading causes of irreversible blindness worldwide and the leading cause of blindness for Americans 55 and older. After more than 15 years of research using a large repository of donated human eye tissue, scientists found it HtrA1 the protein usually increases with age in the eye at the membrane interface of the retinal pigment epithelium (RPE) -Bruch, helping to maintain the normal function of this region. RPE is a cell layer that provides nutrients and removes waste from light-sensitive photoreceptor cells in the retina.

These new data show that this is not the case in individuals with DMAE-associated risk variants located on chromosome 10. These variants were found to impair the expression of HTRA1 of the gene by RPE, which translates into an approximate 50% reduction in HtrA1 protein levels at the RPE-Bruch membrane interface during aging. Lack of production of adequate levels of HtrA1 the protein alters this key region of the eye and is associated with pathologies associated with AMD, including the deposition of abnormal deposits and the development of abnormal blood vessels.

These results, from the laboratory of SCTM Executive Director Gregory S. Hageman, Ph.D., represent the first explanation for the essential role of HtrA1 by maintaining eye health and contradicting literature previously published by others. They are expected to report on the development of new therapies for chromosome-directed AMD 10.

These research data will appear the week of July 19, 2021 in the Proceedings of the National Academy of Sciences of the United States of America (PNAS): “Age-related macular degeneration based on chromosome 10q26 is associated with reduced levels of HTRA1 in the epithelium of human retinal pigment. “

Lead author Brandi L. Williams said her team found significantly reduced levels of HTRA1 messenger ribonucleic acid (mRNA) in RPE and secreted HtrA1 protein at the RPE-Bruch membrane interface. Reduced HTRA1 expression was found to be specific for the risk allele, but only in the RPE and not in the neural retina or choroid. It should be noted that the team also reduced a large genetic region of chromosome 10 associated with AMD to a much smaller causal region, which probably directs the reduced expression of HTRA1.

“Our findings are significant because they suggest so HtrA1 normally maintains the integrity of the RPE-Bruch membrane interface during the aging process, essentially by reversing the extracellular material and preventing abnormal deposits (including basal laminar deposits) from accumulating between the RPE and the membrane. Bruch, “Williams said. SCTM studies documented a significant association between chromosome 10 and the formation of basal laminar deposits. HtrA1 as protection contrary to what one might expect due to the elevation of HtrA1 Protein is believed to be a contributing factor in some diseases such as osteoarthritis. “

Access to a single deposit of more than 8,000 pairs of given human eyes was essential for this study, as there are no animal models that accurately mimic the biology of AMD directed by chromosome 10. This critical resource goes allow the SCTM team to compare HTRA1 expression in eyes derived from donors with and without risk genotypes associated with chromosome 10.

“We were able to generate these exciting results thanks to our eye donors and their families,” Hageman said. “We are very grateful for your precious gifts.”

The SCTM team conducted a series of difficult and time-consuming experiments to reach their innovative conclusions, which contradict the previously published literature that reported neither differences nor high levels of HtrA1 in human eye tissue or blood. Hageman noted that “these particular studies used too few samples and the analyzes were done with neuronal retina and white blood cells, rather than the RPE-Bruch membrane, which is the major site of AMD pathogenesis.”

“Unfortunately, data generated by previous studies have led to the development and testing of therapies, some of which are currently in human clinical trials, designed to reduce overall levels of HtrA1, an approach that may exacerbate AMD’s progression, “Hageman said.” Our team has been tireless in their search for accuracy, performing many extremely difficult experiments to generate this data. They persevered year after year, and I couldn’t be more excited about the data and the scientific vision of this talented team. “

Williams said the investigation will have a far-reaching impact.

“These data should be important for the entire field and for patients with this devastating disease,” he said, “especially in light of the development of therapeutic technologies to correct genes that excite the desert region and repair it.”

SCTM scientists and doctors are now focusing on developing a therapy for chromosome-directed DMAE 10. They have also developed a potential therapy for people at risk for AMD due to abnormal genes found on the chromosome. 1. Together, chromosomes 1 and 10 represent more than 50% of the genetic risk of developing AMD.

This is Hageman’s second publication in PNAS related to the main genetic foundations of AMD. In 2005, a flagship document revealed that genetic variants and haplotypes of complement factor H and related genes on chromosome 1 predispose individuals to AMD.

“When Dr. Hageman began his research related to AMD almost 30 years ago, he was a marine biologist who decided to change course and investigate AMD at a time when this terrible and blinding disease was simply accepted as something that no one could do anything, ”said Randall J Olson, MD, CEO of the Moran Eye Center and distinguished professor of ophthalmology and visual sciences. “He didn’t accept it. I didn’t accept it. So we created the SCTM as a unique academic model designed to quickly turn discoveries into therapies through collaborations with philanthropists and industry, as well as national scientific collaborators and international “.

A major gene expression study conducted as part of a research and development collaboration with Allergan in 2014 employed several eye tissues and blood cells from more than 700 donors and patients, generating about 9.2 billion data points, and revealed new knowledge related to the biology of gene-directed AMD.

“It’s clear that our approach works,” Olson said, “and that Dr. Hageman and his team have come a long way and continue to advance our knowledge of AMD and develop treatments for it.”