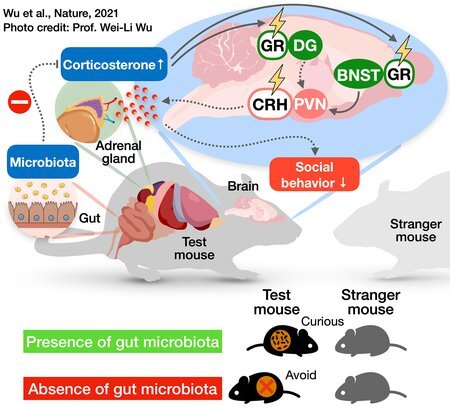 Can germs living inside our body affect our ability to socialize and make friends? Research in recent decades suggests that the answer — for mice — is yes.

Research has shown that the bacterial communities living in the gut of a mouse are essential for animals to exhibit normal social behavior with others mice. Mice that have been bred free of germs, without intestinal microbiome, show significant antisocial behaviors, such as avoiding an unknown mouse instead of interacting with it. How do microbes influence an animal’s behavior? In other words, what is the chain of events that happen at the molecular and cellular level, from intestinal bacteria to the brain behavior changes?

Now, a new study has identified a specific circuit of neurons which is directly influenced by the intestine microbiome and subsequently is responsible for antisocial behaviors in mice that do not have an intestinal microbiome. Fecal transplants from mice with healthy intestinal microbiomes into these germ-free mice were sufficient to change the activity of these neurons and thus improve their social behavior. The researchers also identified a specific bacterial species that may increase sociability.

Identifying interactions between intestinal microbes, neurons, and health effects throughout the body (such as behavioral changes) can be an important line of research on ways, one day, to help improve social deficits. , such as those associated with depression and autism. Current practices for treating these types of problems include prescribing pharmaceuticals, such as antidepressants, and anxiolytic medications. However, it is difficult to get these drugs to the right brain regions at the right concentrations and much of the drug ends up all over the body. Understanding of gut-brain connections adds to evidence that neuropsychiatric disorders can be indirectly improved by treating the gut microbiome, which is much easier to access pharmaceutically than the brain.

The research was carried out mainly in the laboratory of Sarkis Mazmanian, Luis B. and Nelly Soux, Professor of Microbiology and Researcher at the Institute for Medical Heritage Research. An article describing the study appears in the journal Nature.

It has already been shown that, at the chemical level, germ-free mice have significantly higher levels of the hormone corticosterone (the analogue of the so-called stress hormone, cortisol, in humans) than mice with microbiomes without. The team of researchers, led by former postdoctoral fellow of the Mazmanian laboratory Wei-Li Wu, aimed to identify neurons that were affected by corticosterone and that played a role in social behaviors.

“Altering the mouse microbiome we were able to change corticosterone levels: less microbiome means more stress hormone,” says Mazmanian. “There are many neurons in the body that respond to corticosterone (called positive glucocorticoid receptor neurons) and we wanted to know which cell populations and brain regions were then responsible for the alteration of social behavior in germ-free mice?”

After identifying several subsets of neurons in the brain that involved stress control, the team used chemical and genetic tools to artificially block corticosterone to activate these neurons in mice without a microbiome. These mice, despite not having an intestinal microbiome, were able to exhibit more normal social behavior because their neurons did not respond to the stress hormone.

So what caused intestinal bacteria (or lack thereof) to cause an increase in corticosterone levels? To address this, the team performed fecal transplants from wild-type mice with normal intestinal microbiota to germ-free mice. These mice then showed decreased corticosterone levels and more normal social behavior. The team then systematically identified a species of bacteria that mediated this improvement, namely Enterococcus faecalis. Germ-free mice colonized with E. faecalis showed improved social behaviors and reduced corticosterone levels. The mechanisms by which E. faecalis can mediate this improvement will be the subject of future research.

“Several studies have shown that the intestinal microbiome affects complex behaviors in mice, such as sociability. The underlying neural circuits that mediate the influence of the microbiome on behavior had not been previously discovered. This work reinforces the emerging appreciation of profound effects. of the gut-brain connection, ”says Mazmanian. “Conceptually, the findings lay the groundwork for exploring similar effects in humans.”

Wu is now a professor at Taiwan’s Cheng Kung National University. Future directions for this research include approaching the host-bacterium relationship, identifying the molecular signals produced by intestinal microbes, and how these signals influence the host. Mazmanian and Wu plan to continue their collaboration.

“Our study benefited enormously from a number of collaborations, including critical contributions from the laboratories of Viviana Gradinaru and Rustem Ismagilov to Caltech,” says Mazmanian.

The document is entitled “Microbiota social regulation behavior by stress response neurons in the brain. ”

Provided by
California Institute of Technology


Citation: Identification of the neural link between intestinal bacteria and social behavior in mice (2021, July 1) retrieved July 1, 2021 at https://medicalxpress.com/news/2021-07-neural-link-gut -bacteria-social.html