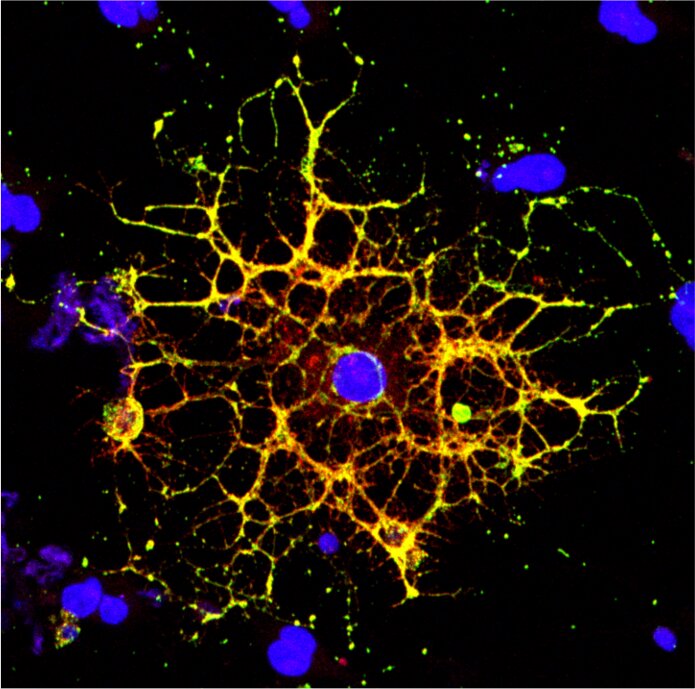 It has long been known that people living with HIV experience a loss of white matter in the brain. Unlike “gray matter,” which is made up of the cell bodies of neurons, white matter is made up of a fatty substance called myelin that coats neurons, providing protection and helping them to transmit signals quickly and efficient. A reduction in white matter is associated with motor and cognitive impairment.

Previous work by a team at the University of Pennsylvania and the Children’s Hospital of Philadelphia (CHOP) found that antiretroviral therapy (ART), the set of life-saving drugs that many people with HIV use on a daily basis, can reduce white matter, but it was unclear how the virus itself contributed to this loss.

In a new study with humans and rodents cells, the team has developed a detailed mechanism, which reveals how HIV prevents myelin-producing brain cells called oligodendrocytes from maturing, thus putting a key to white matter production. When the researchers applied a compound that blocked this process, the cells matured again.

The work is published in the journal Glia.

“Even when people with HIV have the disease well controlled by antiretrovirals, they still have the virus present in the body, so this study came out of our interest in understanding how HIV infection itself affects white matter,” he says. Kelly Jordan-Sciutto, professor at Penn’s School of Dental Medicine and lead co-author of the study. “By understanding these mechanisms, we can take the next step to protect people with HIV infection from these impacts.”

“When people think of the brain, they think of neurons, but they often don’t think of white matter, as important as it is,” says Judith Grinspan, a CHOP researcher and the other co-author of the study. “But it’s clear that myelination plays a key role in various stages of life: in childhood, adolescence, and probably during adult learning. The more we learn about this biology, the more we can do it. to prevent the loss of white matter and the damage it can cause. “

Jordan-Sciutto and Grinspan have been collaborating for several years to clarify how ART and HIV affect the brain, and specifically oligodendrocytes, one of the focuses of Grinspan’s research. His previous work on antiretrovirals had shown that commonly used drugs altered the function of oligodendrocytes, reducing myelin formation.

In the current study, they aimed to isolate the effect of HIV in this process. Led by Lindsay Roth, who recently earned her PhD from Penn’s Biomedical Postgraduate Studies Group and completed a postdoctoral fellowship working with Jordan-Sciutto and Grinspan, the research began by examining human macrophages, one of the main cell type that infects HIV. .

“Immune cells infected with the virus secrete harmful substances, which normally target invasive organisms, but can also kill nearby cells, such as neurons, or prevent them from differentiating,” says Grinspan. “So the next step was to find out what was secreted to cause this effect on oligodendrocytes.”

The researchers had a clue to follow: Glutamate, a neurotransmitter, has neurotoxic effects when it reaches high levels. “If you have too much glutamate, you have big problems,” Grinspan says. Indeed, when researchers applied a compound that dampens glutamate levels in HIV-infected macrophages prior to the transfer of the growth medium to oligodendrocyte precursors, the cells were able to mature into oligodendrocytes. The result suggests that glutamate secreted by infected macrophages was the culprit behind the precursor cells becoming “trapped” in their immature form.

However, there was another mechanism that researchers suspected might be involved: the integrated response to stress. This response integrates signals from four different signaling pathways, leading to changes in gene expression that serve to protect the cell from stress or to cause cell death, if the stress is overwhelming. Previous findings from Jordan-Sciutto’s lab had found that the integrated stress response was activated in other types of brain cells in patients who had cognitive impairment associated with HIV infection, so the team also sought their involvement in oligodendrocytes.

In fact, they found evidence that the integrated stress response was activated in oligodendrocyte precursor cell cultures.

To delve deeper into these findings and test possible new pharmacological targets to address HIV-related cognitive impairments, the team hopes to use a well-characterized HIV infection rat model.

“HIV is a human disease, so it’s hard to model,” Grinspan says. “We want to find out if this model recapitulates human diseases more accurately than others we’ve used in the past.”

By following white matter in this animal model and comparing it with imaging studies done in HIV patients, they hope to better understand what factors make up white matter loss. They are particularly interested in seeing a cohort of teens being treated at CHOP, as teens are a group in which HIV infection rates are rising.

Ultimately, researchers want to distinguish the effects of the virus from the drugs used to treat it to better assess the risks of each.

“When we put people into art, especially kids or teens, it’s important to understand the implications of doing that,” Jordan-Sciutto says. “Antiretrovirals can prevent the establishment of a viral deposit in the central nervous system, which would be wonderful, but we also know that drugs can cause damage, particularly to the white matter.

“And, of course, we can’t forget the 37 million people infected with HIV who live outside the United States and who may not have access to antiretrovirals like the patients here,” he says. “We want to know how we can help them too.”

Provided by
University of Pennsylvania