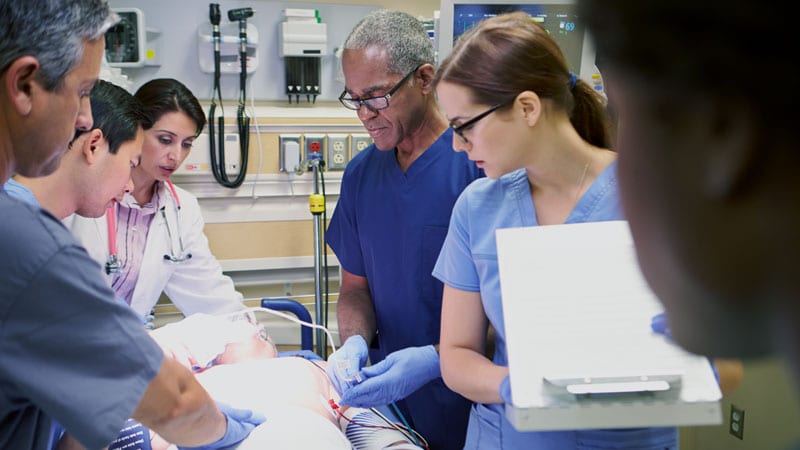 What started as an attempt to standardize attention acute myocardial infarction (MI) with cardiogenic shock in a handful of Detroit area hospitals, it has led to remarkably better survival rates than the traditional tossing of a coin in a nationwide analysis.

The final results of the National Cardiogenic Shock Initiative (NCSI) show that 71% of patients survived discharge and 68% lived to 30 days.

Patients presenting with C or D phase shock, who formed the majority of patients in previous trials, had survival rates of 79% and 77%, respectively.

Among phase E patients, who are in extremis and have typical survival rates below 20%, survival was 54% at discharge and 49% at 30 days, the researcher told the Society. co-principal Babar Basir, DO, Henry Ford Hospital, Detroit. for Angiography and Cardiovascular Interventions (SCAI) 2021 virtual meeting.

“This is the first impetus to consistently achieve survival rates above 50%, especially in those patients who presented with stage C and D shock,” he said. “Really, it’s important to emphasize here the work done to get to this point and all the research that’s been done.”

Co-principal investigator William O’Neill, MD, also of Henry Ford, previously reported on the results of the pilot study showing that 84% of the 30 patients survived to discharge.

The current analysis was based on the results of 406 consecutive patients with acute MI (mean age, 63.7 years; 24% women) who presented with cardiogenic shock in 32 academic hospitals and 48 community hospitals in 29 states plus Washington, DC.

Basir stressed that this is the largest prospective study of cardiogenic shock with the largest acute American MI in 20 years and recruited “one of the sickest cohorts ever studied.” His blood pressure was 77/50 mm Hg on average, 77% had a lactate of at least 2 mmol / L (average, 4.8 mmol / L) and 25% were in shock in phase E.

A quarter of patients were transferred from other institutions, 82% had ST-elevated MI, two-thirds had multivessel disease, and 13% had a left main culprit injury.

Right cardiac catheterization was used in 90% of patients, an Impella CP device in 92%, an Impella 2.5 device in 5%, PCI for femoral access in 78% and aspiration thrombectomy in 27% complete.

Despite this sick cohort, 30-day survival was better than in any previous cardiogenic shock study, Basir said. In comparison, 30-day survival rates were 53%, 60%, and 49% in the SHOCK, IABP SHOCK, i CULPRIT SHOCK essays, respectively.

That said, survival over the first year fell to 53% in the entire cohort, 62% in patients with stage C or D shock and 31% in those with stage E shock.

“One-year mortality remains a problem for these patients and emphasizes the need for goal-oriented, advanced medical therapy heart attack follow-up and new therapies like the one we are planning with the evaluation [supersaturated oxygen] SSO2 to reduce the size of the heart attack in the ISO-SHOCK trial, ”which will begin later this year, Basir said.

Given the promising results of the NCSI, the randomized controlled RECOVER IV trial is scheduled to begin in 2022, he noted. It will assess whether Impella pre-PCI is superior to PCI without Impella in patients with inclusion criteria similar to the NCSI. The DanGer Shock randomized trial is ongoing in Denmark and Germany and assesses all-cause mortality at 6 months with the Impella CP device compared to the standard of care.

“We hypothesize that greater use of this protocol and refinement of climbing strategies will consistently lead to a survival rate of over 80%,” Basir concluded.

Former SCAI President Kirk Garratt, MD, Christiana Care, Newark, Delaware, who moderated a press conference highlighting the data, noted that late complications led to an approximate 20% increase in absolute mortality from discharge to one year and wondered what percentage could be attributed to the mechanical support offered.

Basir said the information was not specifically followed, but that many patients presented with multiorgan failure and, regardless of this, most died due to ongoing heart failure.

During the formal presentation, panelist Ron Waksman, MD, MedStar Heart Institute, Washington, DC, questioned whether the results were different between academic and community centers, but also noted the lack of a comparator in the study. of a single arm.

“Historically it’s very difficult to make any comparisons; we have to have a control group,” he said. “If you had opened it up to any treatment at the time of the initiative, which is fantastic, but not just limited to the use of Impella devices, we would have a better understanding if there really is a differentiation between one device and the other devices . “

Basir replied, “I think it’s a very reasonable comment, and when it comes to your question, it’s always hard to differentiate between academic centers and community centers, but these were great community programs that have all the technology available in an academic center. . “