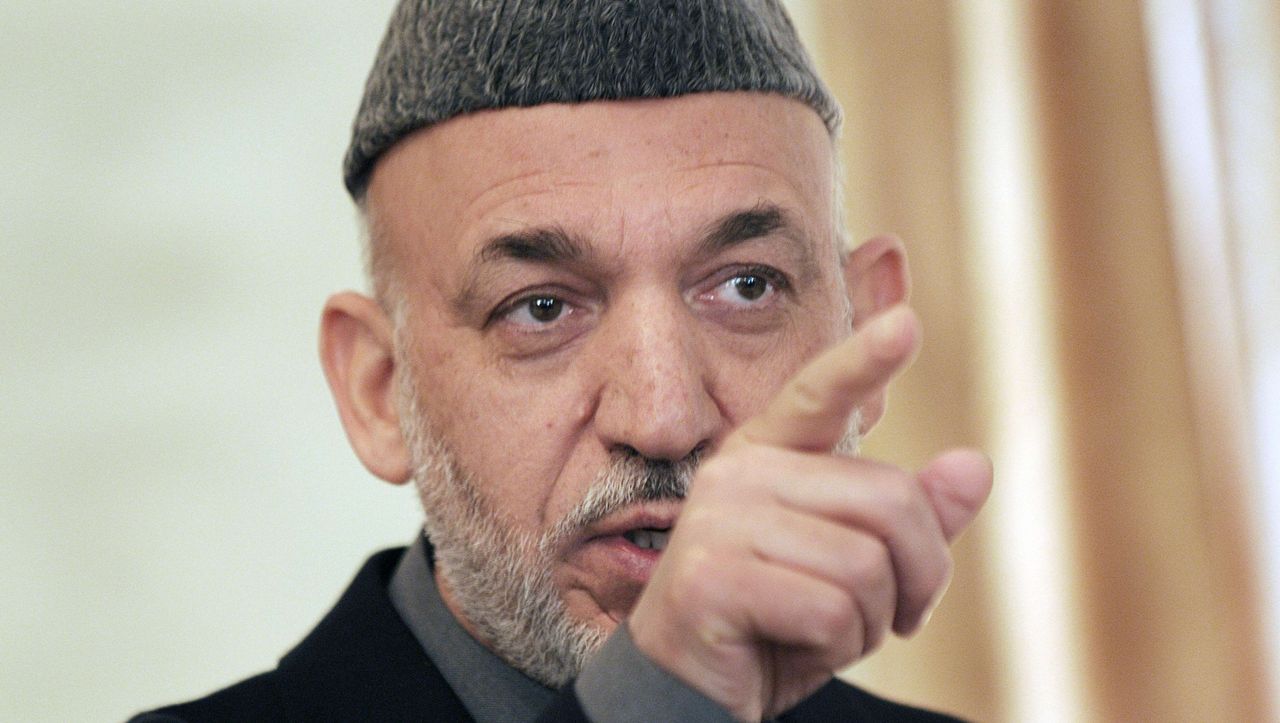 DER SPIEGEL: Mr. Karzai, the Taliban are the very specter of terror in Afghanistan, threatening anyone who works with the government in Kabul with death. Yet you call the Taliban your “brothers.” Why?

Karzai: I realized early into my tenure as president that this war is not our conflict, and we Afghans are just being used against each other – the republic against the Taliban and the Taliban against us. Both the Afghan Republic and the Taliban are victims of these external forces. That is why we are suffering.

Hamid Karzai, 63, was the first elected president of the Islamic Republic of Afghanistan from 2001 to 2014 and is the leader of the Pashtun Popalzai. During the civil war in the 1990s, Karzai initially supported the Taliban. He later stood against oppression by radical Islamists and helped the U.S. overthrow the Taliban government. Karzai is considered the country’s most influential politician, even after his active term in office. He is currently mediating between the contending elites in order to negotiate peace after the U.S. withdrawal and to organize resistance against the Taliban.

DER SPIEGEL: Who is playing against whom here?

Karzai: After the Sept. 11, 2001, terrorist attacks in the U.S., Washington took the historic opportunity to pursue its global ambitions in Afghanistan. Just look at our position on the map. Afghanistan is the most strategically important place in today’s global contest for supremacy. At the same time, Pakistan started using the Taliban to further its own agenda in Afghanistan.

DER SPIEGEL: If the U.S. goal is not to fight radical Islam, what is it about?

Karzai: Of course there are local and regional conflicts, but definitely more important is the issue of geostrategic domination. Over the past 300 years, we have always had at least two rival superpowers in our neighborhood. In the 19th century, it was the Russians and the colonial British Empire. Then, in the second half of the 20th century, it was Russia and the United States.

And now, in the 21st century, it’s the United States and the new global superpower China, as well as Russia – all of which are playing out their rivalries in our country.

A key moment for me was a meeting with senior U.S. policymakers in Washington in 2013, including President Jimmy Carter’s now-deceased former national security adviser, Zbigniew Brzezinski. When I asked whether it was true that America was deliberately promoting radical Islamist forces in Afghanistan and the region, Brzezinski said, yes, they wanted to create as many conflict zones around the USSR as possible, a so-called “arc of crisis”, and that the Soviet invasion was a good opportunity to carry this out. I replied that Islamist extremism had been gravely strengthened as a result and had grown into the danger it is today. Brzezinski replied that from a historical perspective, the rise of a few Islamists was “irrelevant” compared to the failure of communism.

DER SPIEGEL: What does this contest of world powers have to do with the murderous struggle of the Taliban?

Karzai: When things started to go wrong in Afghanistan – around 2005, 2006, when the extremist terrorist attacks started – we talked to the U.S. about the different causes of the violence. We knew that these attacks were being organized by intelligence in Pakistan and carried out by the Taliban. The U.S. confirmed this independently, telling us: Yes, the violence is coming from Pakistan, and yes, the Taliban’s sanctuaries are there. But instead of investigating the root cause of the violence and going after it, Washington started to fund Pakistan’s military.

DER SPIEGEL: Officially, the U.S. compensated Pakistan for their cooperation in the war on terror and paid for the use of ports and roads for their supplies to Afghanistan. What was wrong with that?

Karzai: The U.S. was supporting both sides of the conflict at the same time. It was dropping bombs on Afghan villages in order to fight the Taliban, while at the same time, funding the very country accused of organizing Taliban terror campaigns. Former U.S. President Donald Trump once announced that America had paid $35 billion to Pakistan over these past 19 years. This contradictory policy cost thousands of Afghan lives – troops and civilians alike. Tell me, how was Afghanistan supposed to come to peace?

DER SPIEGEL: How has the U.S. responded to your reproachment?

Karzai: There has never been a satisfactory answer. Either the U.S. has really miscalculated strategically, or Pakistan, which is so closely linked to China and Great Britain, is simply more important than we are for achieving Washington’s global goals.

DER SPIEGEL: What is driving Pakistan to support the Taliban terror campaign in Afghanistan?

Karzai: Pakistan wants to exert strategic influence in Afghanistan through the Taliban. This traces back to fears related to the legacy of British colonial rule in the region.

DER SPIEGEL: Kabul and Islamabad still dispute the so-called Durand Line, which is the official national border between Afghanistan and Pakistan. Kabul does not recognize the Durand Line, while Islamabad does. Could this issue be settled in a security agreement?

Karzai: We Afghans very much welcome the British initiative in this regard and want to have strong relations with Pakistan. There is a great opportunity in that. But a strategic partnership between Afghanistan and Pakistan can only exist if there is peace and stability in Afghanistan, if the trust deficit is eliminated, and if Pakistan shows itself to be a good neighbor.

DER SPIEGEL: What specifically is being asked of Afghanistan?

Karzai: Pakistan actually would like Afghanistan to break off relations with India. That is impossible. If we give in to this, we would give up our sovereignty and independence. If we want to send our police or our army or our boys and girls to India for training because it is good for our country, we should do so. Conversely, India should not complain if we have friendly relations with Pakistan.

DER SPIEGEL: Has Kabul to recognize the Durand Line as the official national border, could that alone be the price of peace?

Karzai: If we could have a relationship with Pakistan similar to the model of the European Union, perhaps a solution could be found. The Durand Line would then be a zone rather than a fixed border, and would formally continue to exist. We want an open exchange between people on both sides, without border controls, and with freedom of movement, similar to what Europeans have achieved today between Germany and France.

DER SPIEGEL: Why should Pakistan give up its fight now, with the U.S. withdrawal on the horizon and, with it, the potential to gain the desired influence in Kabul through the Taliban?

Karzai: The Pakistani offensive is in full swing right now. There is fighting going on. But Pakistan must know that it cannot win by force. They may kill us. They may send us bombs, they may send us extremists, but that does not kill our spirit. Dominating Afghanistan from the outside has never worked. It didn’t work for the British, it didn’t work for the Soviets, and it didn’t work for the United States, even with all of its resources. And the Pakistanis will not succeed either. Right now, we are closing ranks in Afghanistan and organizing resistance. So my appeal to Pakistan is: Let’s be reasonable. Let’s start a civilized relationship between our two countries.

DER SPIEGEL: There is talk of an upcoming conference in Pakistan, where President Ghani is to meet for the first time with the head of the Taliban, Mullah Hebatullah Akhundzadah. Do you know more?

Karzai: Nothing is official yet. We would welcome such a proposal with the utmost interest. At the same time, we have high hopes for the so-called Troika plus, a diplomatic initiative launched by Russia, which also includes China and the United States.

DER SPIEGEL: What do these three nations want to achieve?

Karzai: The Troika includes the three biggest world powers, including the U.S., which is now withdrawing but which wants to continue helping Afghanistan in the future. Pakistan has also been invited to join. The goal is to bring peace to Afghanistan, and the initial statements are really promising, stressing that Afghanistan should have good relations with its neighbors and not harbor extremists. The strength of the panel is that these countries are able to follow through on their promises. If they want to do something, they can deliver.

DER SPIEGEL: The Taliban claim to represent the majority of Afghans, but the same is claimed by the Republic of Afghanistan. How do the Afghans want to live?

Karzai: Firstly, both sides must stop claiming to have the right to represent the Afghan people while holding the guns of a foreign power in their hands. My advice is this: Let the Taliban come back. Let them participate and prove themselves in public, whether in the Loya Jirga – the traditional representation of the people – in elections or in a referendum, as is customary around the world. Only then will it become clear who truly represents the people.

DER SPIEGEL: In recent months, the Taliban have targeted and killed hundreds of officials and activists, including women. Why should the supporters of the republic still believe in a common future with radical Islamists?

Karzai: After the Taliban’s agreement with America, there is no longer any religious or patriotic legitimacy for them to attack their own countrymen or to instigate conflict here. Additionally, we cannot preserve the achievements of the last 20 years without the full participation of Afghan women. I am particularly proud and happy about their return to public life, by the way, and so are the Afghan people. We cannot allow Afghan girls not to go to school. The Taliban know that.

DER SPIEGEL: When it comes down to it, who will decide on war or peace, Pakistan’s intelligence service or the Taliban?

Karzai: Ultimately, the Taliban are also Afghans, and I hope they will stand up to foreign influences where necessary, such as in Pakistan. My appeal to Afghans, including the Taliban, is that we come together and finally take our fate into our own hands against all foreign powers.