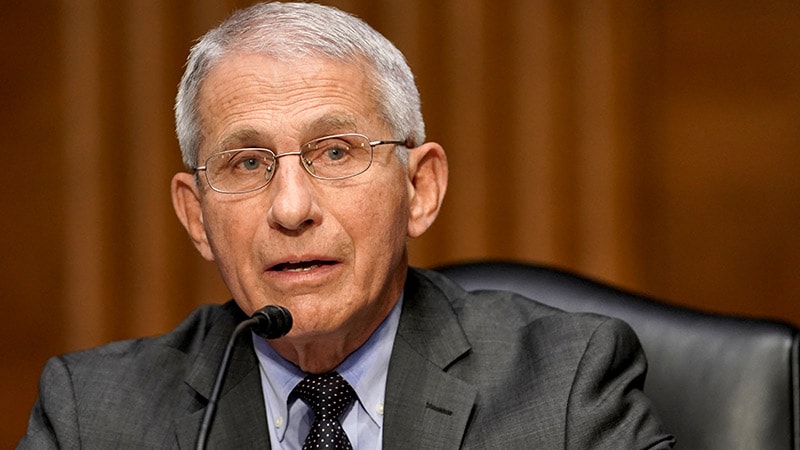 “Vaccines have been the bright light of this extraordinary challenge we have gone through,” said Anthony Fauci, MD, director of the National Institute of Allergy and Infectious Diseases.

In a speech for the opening ceremony of the American Thoracic Society (ATS) virtual international conference, Fauci emphasized the role of basic and clinical research and government support for science to help change the tide of the COVID-19 pandemic.

“A few weeks ago I wrote an editorial in Science, because there was a misunderstanding about how and why we were able to move from carrying out a new pathogen in January 2020 to getting vaccine doses in people’s arms from a highly effective vaccine 11 months later. Really, an unprecedented success, ”he said.

“But, as I told the publisher, the speed and efficiency with which these highly effective vaccines were developed and their potential to save millions of lives is due to an extraordinary multidisciplinary effort involving basic, preclinical and clinical sciences. underway – out of focus – for decades and decades before the development of the COVID-19 pandemic, a fact that very few people really appreciate: the importance of investing in biomedical research. “

The general addresses the troops

Perhaps no other audience is as suitable for receiving Fauci’s speech as those currently (virtually) attending the ATS conference, including researchers examining the virus from all angles to describe how it works and identify its vulnerabilities, epidemiologists who study viral transmission and seem to find ways to frustrate it, public health workers who go to communities across the country to boost vaccine acceptance, and doctors who specialize in critical care and lung medicine, many of which work in the respiratory floors and in the intensive care units where the most serious patients are found. are treated.

Speaking about the lessons learned and the challenges of the COVID-19 pandemic, Fauci briefly reviewed the epidemiology, virology and transmission, diagnosis and clinical course of SARS-CoV-2 infections and therapies and vaccines for to COVID-19.

Fauci noted that the pandemic began in December 2019 with the recognition of a new type of pneumonia in Wuhan District, central China.

“Very soon after, in the first week of January 2020, the Chinese identified a new strain of coronavirus as [the] source of the outbreak. We are moving where we are right now: we have experienced and are experiencing the most devastating pandemic of a respiratory disease in the last 102 years, with approximately 160 million infected individuals, and that is clearly a gross undercount – and also 3.3 million dead, again, most likely an undercount, “he said.

According to the U.S. Centers for Disease Control and Prevention, as of May 9, 2021, there were approximately 32.5 million cases of COVID-19 and 578,520 deaths in the United States. These cases and deaths occurred primarily in three rises in the United States, in early spring, early summer, and late fall 2020.

SARS-CoV-2 is a beta-coronavirus of the same subgenus as SARS CoV-1 and some bat coronaviruses, Fauci explained. The viral genome is large, about 30,000 kilobases, and has four structural proteins, the most important being the S protein or “spike” that allows the virus to bind to cell membranes and fuse with binding to the receptor. ACE2 of the tissues of the upper and lower respiratory tract, gastrointestinal tract, cardiovascular system and other organ systems.

The virus is transmitted primarily through exposure to respiratory droplets less than 6 feet from an infected person, or sometimes through droplets or particles that remain in the air over time and from various distances.

It is now understood that contact with contaminated surfaces, feared as a means of transmission, is less common.

The virus has also been detected in feces, blood, semen and ocular secretions, although the role of transmission through these sources is still unknown.

“There are some very interesting features of this virus, really unique compared to other viruses, certainly other respiratory viruses. [that] Fauci said that “about a third and 40% of infected people never show any symptoms.” It is important and very problematic what we do to contain it, especially in terms of identification, isolation and tracking of contracts, between 50% and 60% of transmission occurs by someone who will never show symptoms, or by someone who is in the pre-symptomatic phase of the disease. “

The basics of acquisition and transmission prevention are as familiar to most Americans now as the Loyalty Commitment: Wearing Universal Masks, Physically Distancing Yourself, Avoiding Crowds and Gathering, Preferring the Outside inside and wash your hands frequently.

Tests for SARS-CoV-2 infection fall into three basic categories: molecular tests such as polymerase chain reaction (PCR) that are highly specific and highly sensitive to actual infections, and antigen tests that detect viral protein instead of nucleic acids and antibody. tests to detect serum proteins performed in response to a viral infection.

Fauci noted that antigen testing is widely used for broader surveillance of groups of individuals to detect viral penetrance within that group.

Fauci said the clinical course of COVID-19 has some interesting features, but it is not substantially different from a flu syndrome.

Symptoms and signs common to both types of infections include fever, cough, fatigue, anorexia, dyspnea and myalgias, but the loss of smell and / or taste that precedes the onset of respiratory symptoms is a unique feature of COVID-19.

Fauci cited data on more than 44,000 individuals with confirmed COVID-19 in China showing that a large majority (81%) of the cases were mild or moderate, but 14% of patients experienced serious illness and 5% were in critical condition. The mortality rate a this study it was 2.3%.

The people most at risk of serious illness are older adults and those of any age with certain comorbidities.

In children, COVID-19 has been associated with a multisystem inflammatory syndrome (MIS-C) similar to that of Kawasaki disease.

In a substantial number of cases, the effects of COVID-19 can last for 6 months or more, Fauci said, noting a study from the University of Washington in Seattle.

Therapeutic products that are approved by the U.S. Food and Drug Administration (FDA), have emergency use authorization, or are in clinical trials for early or moderate disease include remdesivir (Veklury, Gilead Sciences Inc.), monoclonal antibodies, convalescent plasma, antiviral agents, hyperimmune globulin, anticoagulants, and immunomodulators.

Finally, Fauci reviewed the current status of the vaccines, including the three with FDA-authorized emergency use as of this writing: two nucleic acids, Moderna-based RNA (mRNA) vaccines, and Pfizer / BioNTech and a Johnson & Johnson vaccine adenoviral vector.

Other vaccines under development or in use elsewhere in the world include recombinant proteins and adjuvant methods from GlaxoSmithKline and Sanofi (in a Phase 2 clinical trial launched in February 2021) and Novavax.

The three vaccines used in the United States were highly effective in both clinical trials: approximately 95% efficacy for mRNA vaccines and 67% for Johnson & Johnson vaccine.

However, the actual performance of these vaccines has been even more impressive.

For example, the Johnson & Johnson vaccine was 72% effective in preventing moderate to severe COVID-19 in the United States, 68% in Brazil, and 64% in South Africa, and 85% effective. against serious diseases in all countries. regions studied, Fauci said.

He also quoted a study of 22,234 Southwestern University of Texas Medical Center employees in Dallas who were vaccinated under a program initiated on December 15, 2020. The COVID-19 infection rate among these vaccinated employees was 0.05%.

Fauci also recounted the experience in Israel, where the highly transmissible strain B.1.1.7 of SARS-CoV-2 is predominant. A graph of progress clearly shows that as the doses of vaccine administered steadily increased, the number of cases of COVID-19 began to decline precipitously.

Appropriately for a speech presented on the day the Preakness Stakes – the second stage of the Triple Crown of Thoroughbred Racing – was run, Fauci closed with a cartoon showing two racehorses, labeled “SARS -CoV-2 “and” Vaccines “, almost neck and neck, but vaccines have a slight lead.

“We are in a race against the virus. Vaccines and the virus: if we vaccinate the overwhelming proportion of our population, we will certainly be able to crush the outbreak in the same way we have done with other viruses. measles, smallpox and polio “.

“So the message is: get vaccinated,” he concluded.

International Conference of the American Thoracic Society. Filed online May 15, 2021.