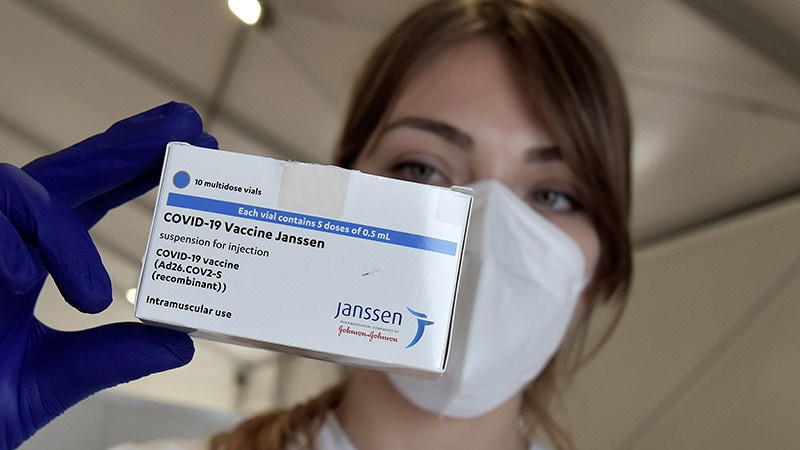 According to an expert group, the use of COVID-19 mRNA vaccines should be considered the preferred option in the US over the Johnson & Johnson (J&J) Janssen COVID-19 vaccine in women under 50 years of age. .

The group makes its recommendation in one editorial inside JAMA published online April 30, accompanying a paper describing details of 12 case reports from cerebral venous sinus thrombosis (CVST) with thrombocytopenia after the J&J COVID-19 vaccine, also known as Ad26.COV2.S.

They note that after a first pause following reports of thrombosis with thrombocytopenia syndrome (TTS) related to the J&J vaccine, and on the recommendation of the Advisory Committee on Immunization Practices, the US has allowed the use of the J&J vaccine in all adults with information about the risk of adding TTS to educational materials.

Editorialists point out that no case of TTS has been confirmed after the administration of more than 180 million doses of mRNA vaccines in the US.

They say that although the J&J vaccine will still be needed for people with allergies to the components of mRNA vaccines and for those living in remote places where the cold chain cannot be maintained for transport and mRNA vaccine storage, “U.S. public health agencies and physicians should consider recommending mRNA vaccines as safer options for those who may have a substantially higher risk of TTS after vaccination Ad26.COV2.S, currently women under 50 “.

In the main JAMA paper, a group led by Isaac See, MD, COVID-19 response team from the Centers for Control and Disvention Control (CDC), reports all 12 cases of CVST with thrombocytopenia following the J&J COVID-19 vaccine reported in the US Vaccine Adverse Event Reporting System (VAERS).

The 12 U.S. case reports, three of which were fatal, show many similarities to the cases described in Europe after the AstraZeneca vaccine.

The authors note that on April 12, approximately 7 million doses of the J&J vaccine had been administered in the United States. The 12 cases of CVST and thrombocytopenia after receiving the vaccine were reported to VAERS between March 2 and April 21. All 12 cases were in white women, 11 of them under 50 years of age.

As of April 25, two more cases have been confirmed and reported to VAERS; one in a man under 40, the other in a woman between 40 and 59 years.

In the 12 cases reported in detail, symptoms began between 6 and 15 days after vaccination.

At least one CVST risk factor was identified in 7 patients (obesity in 6, hypothyroidism in 1 and use of combined oral contraceptives in 1). None of the patients were pregnant or within 12 weeks of delivery, had previous thrombosis, a personal or family history of thrombophilia, or previous documented exposure to heparin.

In addition to the CVST, there were seven patients intracerebral hemorrhage and eight had non-CVST thrombosis.

One patient reported a history of SARS-CoV-2 infection approximately 4 months prior to vaccination. Of the other 11 patients, four had negative serological tests and seven had no tests.

All 12 patients were hospitalized and 10 admitted to an intensive care unit (ICU). At the time of the last follow-up, three patients had died (all of them had intraparenchymal hemorrhage), three remained in the ICU, two were still hospitalized but not in an ICU and four had been discharged from home.

The authors note that U.S. cases of CVST with thrombocytopenia after the J&J vaccine have many similarities to those reported in Europe after the AstraZeneca vaccine, which occur mainly in women under 40 and in patients without a diagnosis of thrombophilia. Both European and American patients had a mean platelet count of 19 × 103/ µL and several also had non-CVST large vessel thrombosis.

In European cases of CVST with thrombocytopenia, 50% of patients died, compared with 25% of American patients.

Like European cases, American cases had ELISA tests of HIT antibodies against heparin-PF4 positive in the absence of previous heparin exposure, as would be seen in autoimmune HIT.

However, in initial European CVST reports, 88% of patients tested with functional HIT platelet antibody tests tested positive, compared with only 11% of U.S. cases. But the authors note that the lack of standardization in functional platelet HIT antibody assays may lead to differences in the results of different laboratories.

“It may be important to notify test labs that TTS is being evaluated post-vaccination, so that test methods can be adjusted if necessary,” they say.

They note that the precise mechanism of TTS in relation to vaccination against COVID-19 has not yet been established. The World Advisory Committee on Vaccine Safety has stated that a platform-specific mechanism related to vector adenovirus vaccines cannot be excluded. Both J&J and AstraZeneca vaccines use an adenoviral vector, but are different; J&J uses a human vector, while AstraZeneca uses a chimpanzee vector.

They also note that CVST and thrombocytopenia after SARS-CoV-2 infection have been reported in at least two cases, but the HIT test was not done in these cases. To date, there have been no reports in VAERS of CVST with thrombocytopenia following COVID-19 mRNA vaccines.

The authors state that these findings have important clinical and public health implications, and noted that the CDC has updated its interim clinical considerations on the use of authorized COVID-19 vaccines to indicate that women 18 to 49 years of age should be aware of the increased risk of TTS after receiving the J&J vaccine and use a non-heparin anticoagulant in suspicious cases.

“Urgent consultation with a neurologist is prudent when a patient is suspected or confirmed to have CVST. In addition, since the average time from onset of symptoms to hospitalization was seven days in the series of U.S. CVST cases, patient and clinician education could shorten the time to clinical evaluation and therefore treatment, ”they state.

The authors also note that VAERS is a passive surveillance system, so cases of CVST with thrombocytopenia may be unreported.

In his accompanying editorial, Karron et al point out that in addition to the 12 patients with CVST with thrombocytopenia described in this series of cases, VAERS has been reported to have at least three patients without CVST but who meet the diagnostic criteria for TTS. (from April 21), all in women aged 18 to 59 (middle age, 37 years).

Editorialists report that the rate of CVST with thrombocytopenia after the J&J vaccine is approximately 5 per million women aged 18 to 50 years. It compares to a background rate of approximately 0.05 to 0.13 per million per month.

They say the availability of a provisional standardized case definition of this adverse effect will facilitate prospective case finding through the review of large linked databases and active case search.

This will also provide a better understanding of whether people who are at increased risk for hypercoagulation in general and CVST in particular (e.g., women taking hormones) contraceptives medications or who are pregnant) also have an increased risk of TTS.

Obtaining this information will support country-specific dynamic assessments of the risks of each vaccine compared to the risk of COVID-19 disease for its populations and subpopulations, they add.