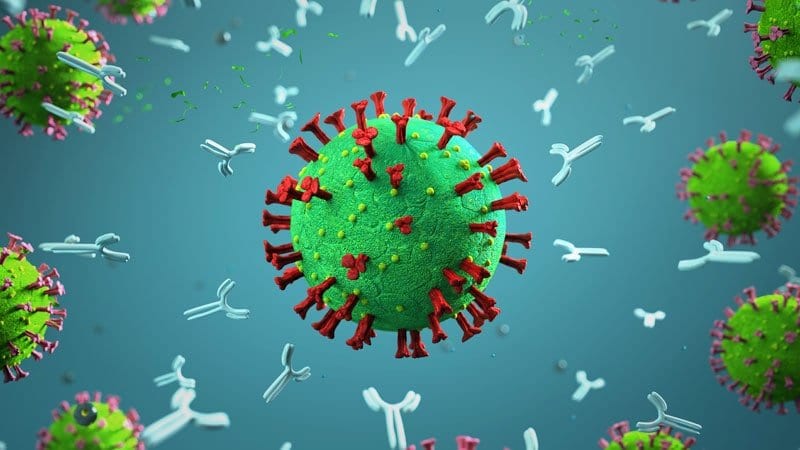 The antibody response is reduced in patients with multiple sclerosis (MS) who take specific disease-modifying therapy (DMT) while infected with SARS-CoV-2, according to new research.

An ongoing prospective study of MS patients who were not vaccinated against the virus reveals those taking DMT ocrelizumab (Ocrevus, Genentech) during COVID-19 infection had lower levels of antispike antibodies compared to those not taking the drug.

However, the response of T cells did not differ significantly between the treated and untreated groups.

“Preliminary results suggest that antibody and T cell responses to SARS-CoV-2 persist in patients with MS for 9 months or more after infection; and antibody responses, but not cell T, appear attenuated in the ocrelizumab group “. Researcher Ilya Kister, MD, Langone Health of New York City, New York City, told attendees at the 2021 annual meeting of the American Academy of Neurology (AAN) virtual.

As of March 2020, approximately 15% of NYU MS Care Center patients have been infected with COVID-19. However, “it is unknown whether DMT affects antibody persistence and T cell responses” to infection, the researchers note.

Antibodies are proteins that can fight viruses and infections.

For the current study, the researchers evaluated the differences in antibody and T cell response between MS patients taking DMT during a COVID infection compared with those not taking these drugs.

Kister presented the results of the first 212 patients enrolled in the ongoing study. All were unvaccinated adults with MS (mean age, 41 years; 70% women; mean duration of MS, 11.5 years). Of these, 36% were treated with ocrelizumab, the most widely used DMT in the group.

Most patients became infected during the first wave of the pandemic in the spring of 2020, Kister noted.

Test results were collected an average of 260 days after infection.

The results showed that “almost all” patients with laboratory-confirmed COVID-19 had antibody responses to infection, as shown in the NYU multiplex trial, including 89% of those treated with ocrelizumab versus 97 % of those who were not treated with the drug, “Kister reported.

However, the ocrelizumab group was significantly less likely to test positive for SARS-CoV-2 antibodies in the Elecsys test (58% vs. 97%; Pg = .0004).

On the other hand, T cell responses were detected at similar rates in both groups. For those taking ocrelizumab versus those not taking the medication, the response rate was 80% versus 82%, respectively, in the ELISpot IFN-y; 86% vs. 67% at ELISpot IL-2; and 39% for both groups in the TruCulture trial.

Asked during the question and answer session if there was any research examining the impact of different drugs on the effectiveness of the COVID-19 vaccine, Kister said he was unaware of these data.

However, “we will do a study on the response to vaccination in patients treated with ocrelizumab. We have not enrolled anyone yet, but we are all ready,” he added.

Kister said he was not completely surprised by the variation in the current study between antibody responses and T cells.

“We have seen in previous vaccine studies that antibody responses decrease in people with B cells that have been depleted; and the T cell response is not expected to be predominantly affected in patients with ocrelizumab. which is what we have seen “. dit.

Commenting on the findings of Medscape Medical News, Barry A. Singer, MD, director, The MS Center for Innovations in Care at Missouri Baptist Medical Center, St. Louis, noted “at this point, we can see that patients who have already been exposed to the COVID-19 virus and the ocrelizumab can give a good T cell response to the virus. ” This is especially important in patients with depleted B cells, said Singer, who did not participate in the research.

“The biggest question that arises is, does this apply to vaccines? Will the vaccine work if I use a drug to deplete B cells? This study has not responded to that,” although new ones have now begun. studies on the issue. dit.

“No harm is done to vaccination. The question is, will the vaccine work so effectively in certain disease-modifying therapies?” Singer asked.

Also commenting on the findings, John Corboy, MD, a professor of neurology at the University of Colorado School of Medicine, Aurora, said Medscape Medical News he was impressed with the wide variety of tests used.

“So it was relatively broad. It wasn’t the biggest study, but considering the time period, it’s a pretty important undertaking to be able to get all these patients and do the tests,” said Corboy, who is also co-director of the Rocky Mountain MS Center at the University of Colorado.

He noted that the results showed variability between antibody tests, but there were no differences in T cell response between treatment groups.

“This is mostly reassuring, but it’s also a bit of a warning in the sense that there is a diminished response. And it’s a reminder that we should consider all the different drugs and their potential effect on vaccines,” he said. to say.