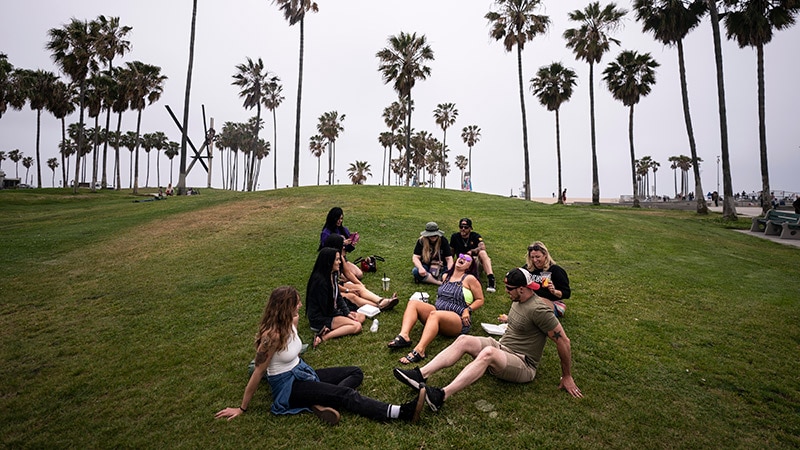 A group of friends, who said they were fully vaccinated against COVID-19, mingle on the beach in the Venice section of Los Angeles.

Deaths from COVID-19 in the United States have dropped to an average of about 600 per day, the lowest level in ten months, with a number of lives lost to a single digit in more than half of the states, and in a few days, up to zero.

Confirmed infections have dropped to about 38,000 a day on average, their lowest score since mid-September. While this is still a cause for concern, reported cases have plummeted 85% from a daily high of more than a quarter of a million in early January.

The last time U.S. pandemic deaths were so low was in early July last year. The number of people with COVID-19 who died exceeded in mid-January, averaging more than 3,400 a day, just one month into the largest vaccine in the country’s history.

The Boston Herald put a huge zero on its front page Wednesday under the headline “The first time in nearly a year the state has no new coronavirus deaths.” Indiana reported a death from COVID-19 on Tuesday. Kansas, which hit a high of 63 deaths on Dec. 22, has been in the single digits since February and has seen several days with only one virus-related death.

“The main goal is to deny this virus the ability to kill at the rate it could, and that has been achieved,” he said. “In fact, we have domesticated the virus.”

Approximately 45% of the nation’s adults are fully vaccinated and nearly 59% have received at least one dose, according to the Centers for Disease Control and Prevention. This week, the Pfizer vaccine has obtained authorization for use in young people aged 12 to 15, a measure that could facilitate the reopening of schools in the country.

Doctors like Dr. Tom Dean in Jerauld County, South Dakota are cautious and optimistic, concerned about the many people who have decided not to get vaccinated or have stopped being lax in protecting against infections. The county has reported only three confirmed cases in the past two weeks, according to data from Johns Hopkins.

“What I’m afraid of is that people believe this is all over and you don’t have to worry anymore,” Dean said. “I think complacency is our biggest threat right now.”

Several states, including Wyoming, Vermont, Alaska and Hawaii, averaged less than one death per day COVID-19 over the past week, according to data from Johns Hopkins through Tuesday.

And even among the five states with the highest daily deaths: Michigan with an average of 65.4, Florida with 61.7, California with 48, Texas with 44 and New York with 39.3, all but the number of Florida was coming down.

California, the epicenter of the U.S. outbreak during the winter, recorded 1,231 new cases confirmed Wednesday, below a high of 40,000. Los Angeles County reported 18 deaths on Tuesday, up from more than 200 a day in January.

Vermont, which nearly 63 percent lead the country in the proportion of the population that has received at least one dose of vaccine, has gone nearly a week without reporting a death from COVID-19.

The improvement has not been so dramatic everywhere. Michigan, which for weeks has reported the worst infection rate in the country, is now just beginning to see a decline in mortality. But over the past two weeks, cases in the state have gone from a daily average of nearly 4,860 to about 2,680 on Monday.

“Every day we approach leaving this pandemic behind,” Michigan Gov. Gretchen Whitmer said.

In Kansas, the Amos Family Funeral Home & Crematory saw several COVID-19 victims at the height of the outbreak. But he has been in charge for weeks, said Parker Amos, president of the Kansas City area business.

“It’s a great relief,” he said. “Especially at the beginning of that, when we didn’t know exactly how bad it was or how bad it was going to come out, it was scary to be in this industry.”

The funeral home now operates through an accumulation of memorial services that families postponed as cases escalated.

“You want families to be able to have this closure,” Amos said, “and enduring it for a year is something we feel for these families largely because that’s really hard.”

Dr. Mark Rosenberg, president of the American College of Emergency Physicians, was almost placed on a ventilator when he hired COVID-19 in December. Now he marvels at how things have changed, saying that people are so happy that it reminds him of the photos he has seen of soldiers returning from World War II.

“That’s how we started to feel it, we got it,” said Rosenberg, who practices emergency medicine in St. Louis. Joseph’s Health in Paterson, New Jersey. “People are touching each other again. They’re hugging.”

The overall death toll in the United States from the pandemic was more than 583,000 as of Wednesday. Teams of experts consulted by the CDC projected last week in a report that new deaths and cases would fall sharply in late July and continue to fall after that.

The encouraging outlook contrasts with the catastrophe unfolding in places like India and Brazil.

“I think we’re in a fantastic place, but I think India is an important story,” warned Justin Lessler, a professor of epidemiology at Johns Hopkins.

“If there is a proper combination of vacant hesitation, potentially new variants, and rapid recoil control measures coming together, we could ruin it and have another completely unnecessary wave right now,” Lessler said.

Ali Mokdad, a professor of health metrics at the University of Washington, predicted that as vaccinations continued, both confirmed cases and deaths would decrease in the summer, leading many to assume that “COVID-19 is gone,” although outbreaks in places like India have the potential to fuel new, more virulent variants.

“The race is to vaccinate as much as we can before winter enters,” said Mokdad, who added that the current percentage of vaccinated population is not high enough to stop another wave of coronavirus infections.