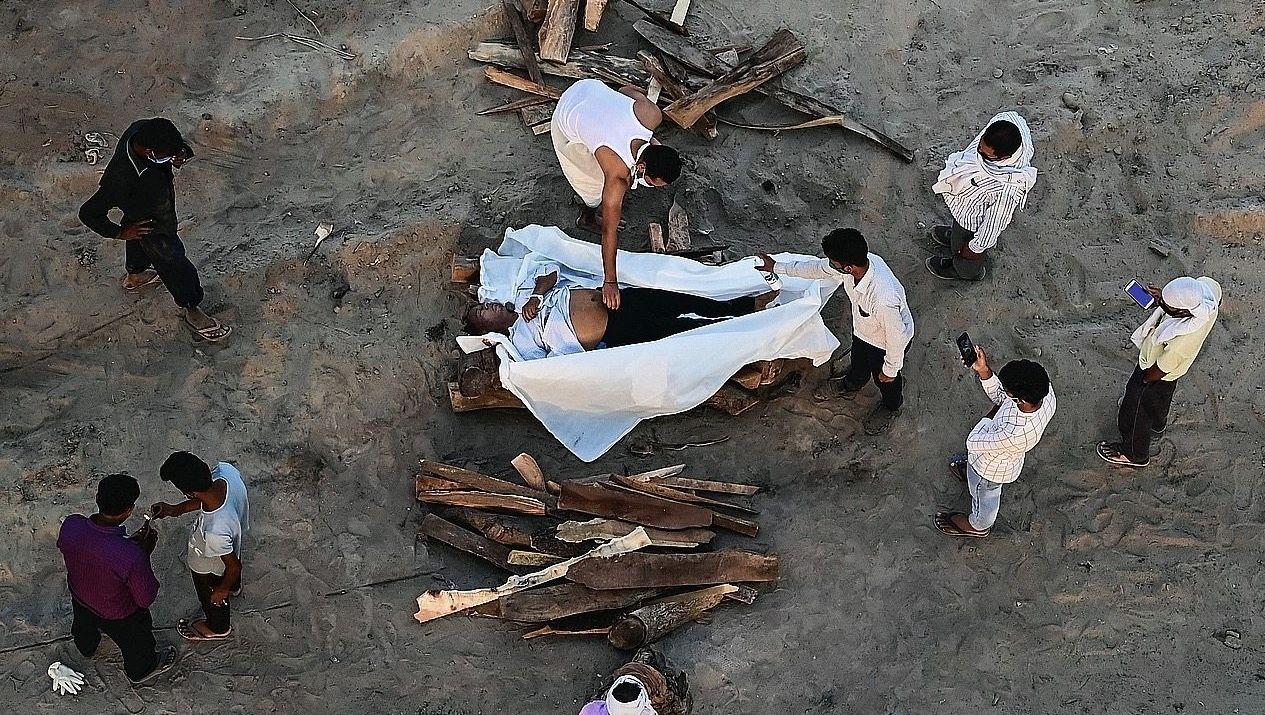 THE MIRROR: In mid-April, at a time when the capital’s hospital beds were already filling up, Prime Minister Narendra Modi held electoral rallies with tens of thousands of participants. His party hailed him for having “conquered the pandemic.” Since then, the coronavirus has ravaged the country. How could the government have judged the situation so badly?

Mehta: Modi has always had supreme confidence in his own political skills. But the pandemic has revealed a prime minister who has been trapped in his own mystique. There is no member of the opposition or coalition with whom to engage. Even within his own party, the BJP (Bharatiya Janata Party), no serious opponents remain. Bureaucrats are selected based on loyalty rather than experience. Modi surrounds himself with people who don’t tell him the truth, not even in silence.

THE MIRROR: You are saying that the COVID-19 disaster in India has been the result of a loss of reality in the front rows of government.

Mehta: Partly yes. It is one thing to deceive others. But once you start fooling yourself, you have deep problems. But I think the government’s indifference reflects more: Modi always valued his gaze on others. Now, it seems he no longer cares much about how his behavior is. It is the ultimate expression of power: not even feeling the need to pretend.

THE MIRROR: This could explain Modi’s strange absence. He has not made any major public appearances since April 20.

Mehta: This is really remarkable. Modi has not held any press conferences in the seven years he has been in office. But he has always loved making great speeches. It is extraordinary that at this time of absolute national devastation it has almost disappeared from public view. No attempt has been made to convey to people that there is a prime minister who feels their pain. One who at least acknowledges his suffering.

THE MIRROR: Will the Indians blame Modi for the government’s mistakes?

Mehta: A month ago I would have said no. But even Modi supporters are now expressing their anger. His party also draws a not inconsiderable part of its strength from laziness and the division of the opposition. Now it seems, provisionally, as if the opposition is getting better at coordinating. It’s still a long shot, but for the first time the BJP doesn’t seem invincible.

THE MIRROR: So far, however, no mistake has affected the immense popularity of the prime minister.

Mehta: This tragedy is different from anything that has happened before. We are experiencing one of the biggest crises since independence. The second wave also hit the middle class hard and they have always supported Modi. There is hardly a family that has been saved.

THE MIRROR: Why was India affected in the first place?

Mehta: This is a question for epidemiologists. But the government made a number of clear mistakes. They ignored the warnings and instead allowed large meetings to be held. Emergency hospitals were discharged. Too little vaccine was requested too late.

THE MIRROR: How will Modi’s match react if he is really pressured?

Mehta: In the short term, the BJP will place even more emphasis on its polarization and repression agenda. I have another concern, though. Let’s take Uttar Pradesh, a poor state but hugely important from a political perspective. Uttar Pradesh is led by a BJP politician who has openly called for violence on several occasions and who considers himself the future of his party. He will face an election next year. In case you lose a lot, you will probably admit defeat. But what if the result is close? Can we then rely on the BJP to ensure a peaceful transfer of power?

THE MIRROR: So far, the BJP has always respected the election result. What makes you think the party might steal an election?

Mehta: Remember that we are facing a party that is being persecuted complex. Any criticism is attacked as “anti-national,” as part of a conspiracy against the state. We have seen in the US what happens when elements of a party no longer comply with the democratic rules of the game.

THE MIRROR: Writer Ramachandra Guha coined the phrase “50-50 democracy” for India ten years ago in a piece in which he described the flaws of India’s democracy. Where would you place the country?

Mehta: Somewhere around 30-70, against democracy. What Guha criticized at the time was that India, while granting political freedoms to its citizens, is a country characterized by deep social inequality. The challenges facing our current democracy are much more serious. Minorities are considered second-class citizens. Secularism and liberalism have become insults. The protection of basic civil liberties is no longer guaranteed. The Supreme Court, considered one of the most powerful institutions in the country, has become one of the most servile. Indian democracy has deteriorated in almost every aspect.

THE MIRROR: But isn’t Modi himself the proof that democracy works: a man with little training who reached the top? His choice was also the rejection of a Westernized elite in New Delhi.

Mehta: The BJP likes to pretend that Modi’s rise reflects a supposedly more common India. I don’t think so. Take, for example, Indian television, which feeds the machinery of hatred on which the BJP depends so much. Some of the channels are funded by the same old elite that was previously funded by the Congress Party. It’s as old as making money. The elite, supposedly despised by the BJP, is among its top supporters.

THE MIRROR: What role does Hindu nationalism play in the success of the party: this idea that India is, in the first place, the home of Hindus?

Mehta: A crucial one. But while promises such as the construction of the temple in Ayodhya and the protection of the holy cow served as a means to win an election, as in 2014, they have moved on to a project to transform Indian society. India is on its way to becoming a majority democracy, a state in which the Hindu majority dominates minorities, particularly Muslims. Hinduism, which, in its diversity, eludes fixed definitions, is becoming an ethnic national identity. Muslims, intellectuals, leftists: the BJP has identified a number of alleged enemies within the country against which the Hindu nation must combine. This projection of a constant threat serves to legitimize authoritarianism.

THE MIRROR: One of the many explanations for the rise of nationalism in the West is that its citizens feel abandoned. India’s recent past, on the other hand, is a story of rise. Why does this thought still resonate?

Mehta: For three reasons. First, Hindu nationalism is nothing new, its underground currents have existed since the dawn of the Republic of India and have never disappeared altogether. Second, 2014, when Modi was elected prime minister, was a time of nervousness and frustration. The elite feared that we might fall back into a time of economic stagnation, that India was too soft, and that democratic processes would hold back the country. The less privileged hoped that Modi would break the old dynastic power structures, end corruption and change their lives for the better. Many were drawn to an ideology that embodied discipline and the exercise of ruthless power. Modi was seen as a man who could push for reforms, even against resistance.

THE MIRROR: And the third reason?

Mehta: For the past twenty years, the BJP has managed to establish itself as a social movement, especially in the cities and towns of northern India, and has therefore injected its poison into civil society. They successfully filled the gap left by the opposition, you have to give them that.

THE MIRROR: What are you most afraid of when you think about the future of India?

Mehta: The nightmare scenario that comes to mind is the twenties and thirties in Europe, specifically in Germany.

THE MIRROR: Comparing Modi India with the Beginnings of Nazi Germany: Isn’t that a bit of an exaggeration?

Mehta: I agree that comparisons with the Weimar Republic are often used too loosely. But the same mechanisms are at stake. We are facing an ideology that marginalizes Muslims as foreigners, a seventh of the population. All aspects of society must be subject to its totalitarian agenda at the expense of civil rights. It intimidates independent institutions that could protect individual rights. The goal is a state where everyone dances to the same tune. There are also terrifying parallels with the India of that time.

THE MIRROR: The 1920s and 1930s in India were the time of India’s struggle for independence. Freedom fighters like Mahatma Gandhi fought against British colonial rule.

Mehta: The founding fathers of Gandhi and India envisioned a country in which Hindus, Muslims, and members of other religions could coexist peacefully. His political opponents, the Hindu nationalists, propagated a Hindu state. Then, as now, they used the same threat to justify their agenda: that if the Hindus do not unite, India will somehow collapse or be invaded by enemies. It was this thought that led to the assassination of Gandhi and the partition of the country. Hindu nationalism was not unreasonably inspired by European fascism. We are fighting for the survival of Indian democracy.