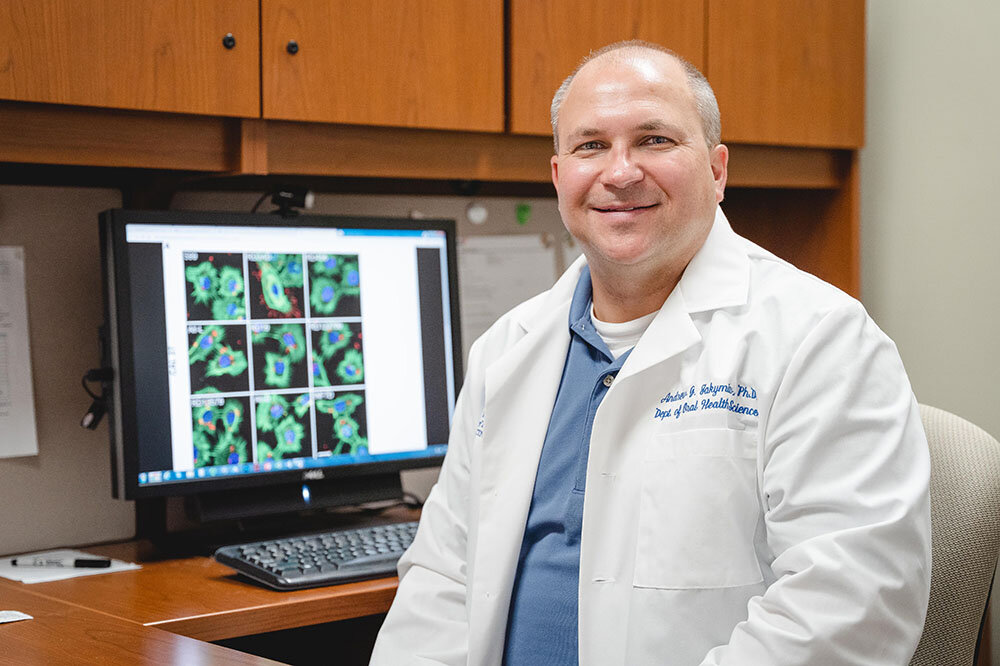 Researchers at the MUSC Hollings Cancer Center are exploring the use of peptide carriers for the delivery of small RNA drugs as a new treatment for cancer. The team’s recent work, published online March 19 at Molecular therapy: nucleic acids , lays the groundwork for developing an RNAi-based pharmacological treatment strategy for peptide carriers clinically relevant to human oral cancer.

According to the American Cancer Society, the estimated risk of developing oral cancer in the US it is 1 in 60 men and 1 in 140 women. Cancer therapies face multiple challenges, including off-target side effects and low efficacy. RNAi-based therapies have great potential to overcome these specific treatment challenges.

Andrew Jakymiw, Ph.D., who is also an associate professor in the Department of Oral Health Sciences at MUSC, focuses on the study of RNA interference-based therapies (RNAi) for oral cancer. RNAi is a method of genetic silencing that specifically targets or marks messenger RNA (mRNA) for degradation. MRNA contains the genetic code needed to make proteins. Small interfering RNAs (siRNAs) are pieces of RNA that can bind to specific regions of mRNA that prevent the manufacture of proteins. Scientists are figuring out how to use it to target and silence genes that cause disease. Decades of research have shown that certain proteins are overexpressed in cancer and lead to growth of cancer cells. The goal of the RNAi drug treatment strategy is to “turn off” the proteins that promote the development of cancer.

Jakymiw said that while the principle is biologically sound, there are many technical challenges with siRNA delivery. “For example, rapid renal excretion, RNase degradation, low intracellular uptake, endosomal entrapment, and low release of siRNA load from the delivery platform are challenges we must consider in when modifying a peptide siRNA carrier, ”he said.

To take advantage of the silencing capabilities of siRNA genes, scientists must introduce siRNA into the appropriate cells. The siRNA must be attached to a larger molecule to protect it during delivery to the desired location. Peptide carriers are an attractive tool for administering siRNAs as they are affordable and easy to modify.

In previous studies, the Jakymiw lab found that the original peptide carrier they designed, called 599, could deliver siRNA load to cancer cells and inactivate a cancer-specific gene, which inhibited tumor growth in a mouse cancer model.

“We originally designed the 599 peptide so that it could help the siRNA load to penetrate the cell and escape the endosomes more easily. However, looking at the three-dimensional arrangement of the 599 peptide amino acids, in particular its stereochemistry, we were able to make additional changes that would beneficially affect the capabilities of the peptide carrier, ”Jakymiw said.

Charles Holjencin, a dual DMD / Ph.D. Jakymiw lab student used confocal fluorescence microscopy and observed that one of the 599-modified siRNA-modified peptide carriers, called RD3AD, was arranged around the cancer cells in a clear pattern he had not seen with the carrier. of 599 original peptides.

The modified RD3AD peptide carrier delivered the siRNA drug by adhering to the protrusions on the cell surface and potentially moving, called a filopodi. Entry into the cell by phylopodium is a very efficient way for small biological complexes to enter cells; some viruses and bacteria also use this input method. Since the siRNA-laden RD3AD peptide carrier was able to enter cancer cells more efficiently, the research team saw improved gene silence. This meant the peptide carrier had increased the potential to administer cancer treatment, Jakymiw explained.

One of the next steps will be to test the RD3AD peptide in animal cancer models. In addition, researchers want to understand the mechanisms associated with this form of drug administration more fully. For example, an unanswered question is with what protein does the peptide carrier interact in phylopods? If this molecule is overexpressed in cancer, this could be a valuable therapeutic target, especially for aggressive cancers, which typically have a larger number of phylopods.

While cancer cells were the biological goal to improve this drug delivery system, peptide carriers, such as RD3AD, have more applications than just cancer therapies. In fact, peptides as RD3AD could be used to administer siRNA in any case in which it is desired to silence genes for the treatment of a disease.

Now that the Jakymiw lab understands how to take advantage of the specific stereochemical modifications of amino acids in their peptide designs, carrierSkills are not limited to siRNA alone. These peptide carriers can supply other nucleic acid loads, opening up future options for more specific delivery of other forms of therapeutic molecules to treat difficult diseases.

“I look forward to collaborating with members of the Hollings Cancer Center on future studies related to how the phylopod can be exploited to improve drug supply, especially in the treatment of aggressive cancers,” Jakymiw said.