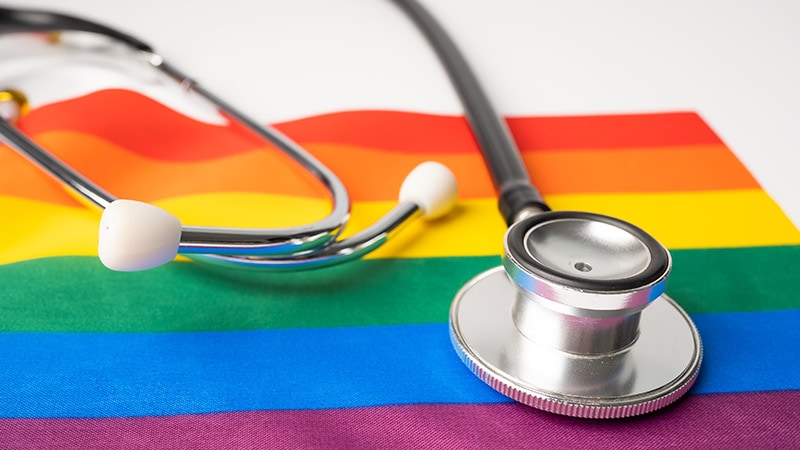 More than eleven million individuals in the United States are identified as LGBTQ + and the data show that this population has a shorter life expectancy and a rate of suicide, violence and cardiovascular disease, according to Keshav Khanijow, MD, of Northwestern University, Chicago, and Nicole Rosendale, MD, of the University of California, San Francisco.

More than half of these people said they had been discriminated against and one in three transgender people reported prejudice when visiting a doctor or health clinic, they said in a presentation to SHM Converge, the Society of Hospital’s annual conference Medicine.

“It’s impossible to know how someone identifies by gender just by looking at them,” Rosendale stressed.

However, attention to terminology, the use of affirmative language and documentation, and attention to clinical considerations can help LGBTQ + patients feel comfortable in the healthcare setting.

Ask patients how they identify, Khanijow said. It is important to ask about sexual orientation as part of a social history. One of the big “Don’t do” of the terminology is to avoid using the term “homosexual,” he added. Although the description “homosexual” began as a scientific term, it has been associated with pathology, rather than identity, and is often used by hate groups. Nor should it assume the patient’s partner-based sexual orientation.

Always ask about sexual orientation before taking it and include this information in the documentation. Khanijow used an example of a “unique” case of a 45-year-old man who identifies as “queer” and presents a migraine. The most appropriate version would be “45yoM which is identified as queer with PMHx Migraines presents with Headache“Khanijow said. However, as a doctor, consider why you include sexual orientation in the single line. If there is no real reason to include it (such as stress related to the exit, increased risk of other diseases) may not be necessary at all visits.

Khanijow shared some specific considerations for the transgender / non-binary population.

In terms of gender, “it’s very respectful to identify patients as they would like to be identified,” he said.

He asked how they identify their gender, including preferred pronouns, and be sure to write that identification on their documents, he said. Be vigilant to properly target a transgender patient. Errors occur, and when they do, correct yourself, apologize succinctly, and move on.

Research on LGBTQ + health is limited, and these people are often grouped into a single category despite several experiences, Rosendale said. Another limitation in LGBTQ + research is that some studies evaluate on the basis of identity (such as gays, lesbians, bisexuals) while others value behavior (studies of men having sex with men).

Rosendale continued to highlight several important clinical concerns for the LGBTQ + population. Compared to the general population, lesbian women have a higher risk of suffering Lung cancer, and gay men have an increased risk of prostate, colon and testicular cancer. Potential risk factors for heart disease of physical inactivity, obesity, and smoking is more common among lesbian women, and smoking and alcohol consumption they are more common among gay men and men who have sex with men have a higher risk of STIs.

Clinicians should also be aware that “bisexual people have worse health outcomes than their lesbian, gay, and heterosexual counterparts,” Rosendale said.

In trans men, testosterone use has not been definitively related to cardiovascular risk, although patients may experience small changes in systolic blood pressure, lipid profiles, and blood glucose, Rosendale noted.

Best practices outlined in the document include accommodation of transgender people based on their identity and recognition that these patients may experience additional stress while hospitalized if personal clothing or other means of gender expression are replaced during their hospital stay. , Rosendale pointed out.

Finally, physicians who see LGBTQ + patients in an acute care setting should be aware that socioeconomic disparities may limit access to outpatient care and that this population has higher unemployment rates, exacerbated by COVID-19 pandemic underway, Rosendale said. He also advised clinicians to keep in mind that LGBTQ + people may be discriminated against in rehab centers and that their decision-makers may be individuals other than family members.

Khanijow and Rosendale had no financial conflict to reveal.

This article originally appeared on The Hospitalist, an official publication of the Society of Hospital Medicine.