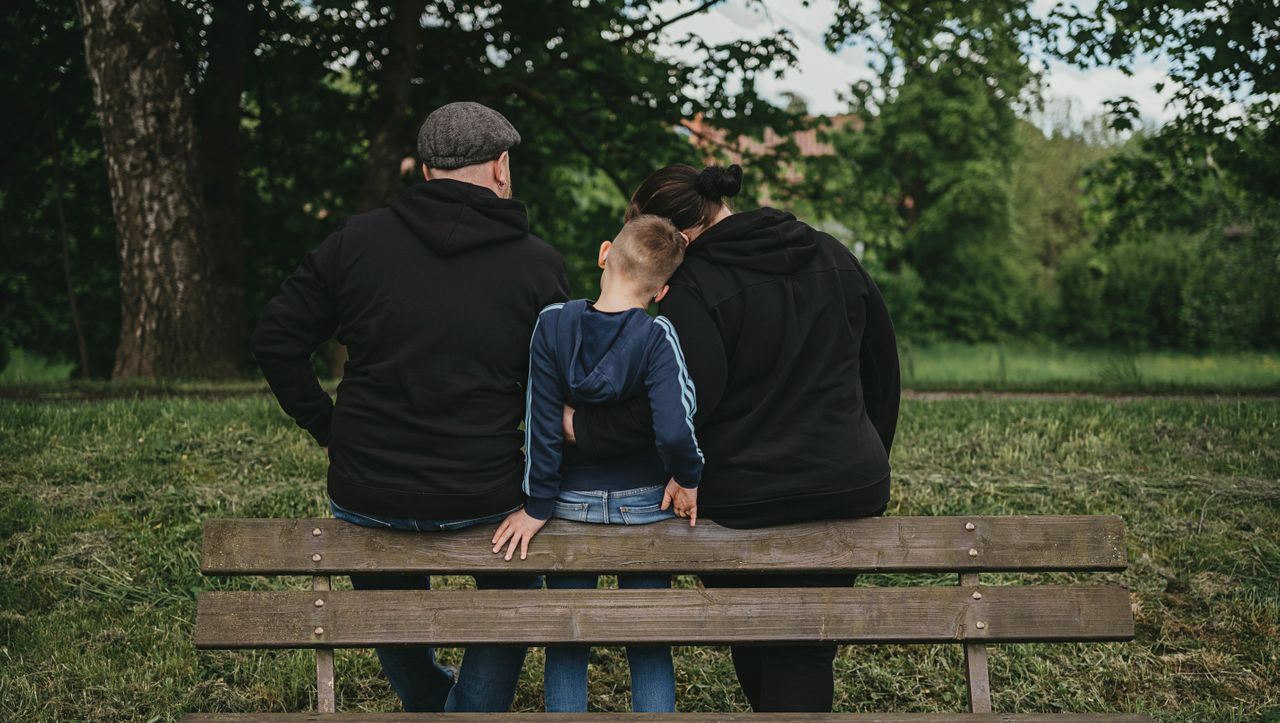 Lukas was not even a year old when his parents started thinking that something could happen to him. “It just doesn’t look normal – it’s different, even wilder than the savages,” says his father, a 47-year-old who works shifts as a machine operator.

The family lives in a rural village in the German state of Bavaria. Her mother, 44, is an office worker. Lukas, now eight, is an only child and a stranger. “When Lukas wanted to play and wasn’t allowed or made fun of his nasal voice,” says his mother, “he would just start hitting or biting.”

His classmates avoid Lukas, but his teacher accepts him as he is and has done a good job of including him. The teacher just puts her hand on Lukas’ hand, her parents say, signaling her to calm down.


But when the coronavirus pandemic broke out, school learning was canceled for extended periods of time. The teacher can only spend an hour each morning teaching in teams before putting homework on the mail. “I had to sit down with Lukas and tell him what to do,” his mother recalls. “Of course, he would scold me and tell me I’m not a teacher and he would say,‘ I don’t feel like it. ’He says he scolded him and yelled.

Lukas’ parents then went to a child psychiatrist in a nearby town. He was diagnosed with Attention Deficit Hyperactivity Disorder (ADHD) and given a prescription for methylphenidate, which is known by the brands Ritalin, Concerta, Equasym and Medikinet.

“At first he was against it,” says his mother, “because people always say that methylphenidate changes children’s personality.” In the end, however, she and her husband agreed. Lukas is given a purple pill every morning.

When daycares, schools, and sports clubs were closed during the first wave of coronavirus and when the environment and their family structures changed, many restless or unfocused children were diagnosed with ADHD. Their behavior, which had previously been considered normal, went into the realm of a mental disorder and they are now being treated with medication. Chinese researchers have seen a similar shift in schoolchildren with pre-existing ADHD conditions. During the COVID-19 outbreak, the symptoms of the boys and girls became much more severe.

Globally, 90 percent of children did not have a continuing and regular education by 2020. It is likely that almost all students will suffer as a result, but some were particularly severely affected.

“We see more children with psychological stress and children with emerging or new behavior problems,” pediatricians in the German city of Hamburg said after the first blockade. ADHD, they noted, is increasing “empirically and in severity.”

Child and adolescent psychotherapist Thomas Meinhart says he is seeing a trend. His consultation is on the first floor of a Bavarian farmhouse. He says he treats about 30 boys every quarter who are restless and erratic, including Lukas.

“The suffering of families has increased during the pandemic, and members ignite each other in some cases,” Meinhart says. “In these cases, the indication that medications should be prescribed is more obvious.”

Caroline Maxton, a doctor at a pediatric neurology practice in Hamburg, says she has seen a trend in prescription drugs. Before the pandemic, he says, some families blamed teachers for their children’s problems at school. “But when classes were canceled during the first closure, many parents noticed at home how difficult it was for their child to concentrate and complete homework,” she says. “The result was that more children were medicated.”

In addition to the cancellation of face-to-face classes, parent training sessions and social skills courses were also stopped. In addition, sports groups could not meet and there were even significant restrictions on daily exercise. This was disastrous for children with ADHD-prone tendencies, Maxton says, because physical activity is part of treating the disease.

About 750 to 900 children with ADHD are treated each quarter in practice with their colleagues. Most do without medication. Maxton estimated the number of prescriptions given before and during the pandemic for DER SPIEGEL. “We had almost 30 percent more children who received medication recently at our consultation from March 15, 2020 to February 19, 2021 than from March 15, 2019 to February 19, 2020,” he says. .

This increase once again shows the influence the environment has on whether a child becomes restless to the point of needing treatment. Another factor is the date of birth. Children who were born by chance just before the deadline to enroll in school, making them the youngest to enter first grade, are significantly more likely to be diagnosed with ADHD. Doctors often interpret age-related immaturity as a mental disorder, which is actually a misdiagnosis.

Manufacturers of ADHD drugs, on the other hand, present the disease as a congenital disorder of brain metabolism, thus exonerating families. “It is important for parents of children with ADHD to know that ADHD is not caused by parental errors. Rather, the disorder is supposed to develop essentially due to an inherited predisposition,” says an ADHD portal operated by Medice Arzneimittel Pütter, a German pharmaceutical company. The company sells pills that contain methylphenidate, which helps children with ADHD calm down and be more alert.

In addition to informing the public about ADHD, Medice also recruits doctors from universities and research institutions who are willing to work for the company, in exchange for compensation, of course. These “key opinion leaders” have long been a part of pharmaceutical marketing. Doctors who are critical of the practice accuse colleagues who take the money of being business goods.

Members of the European Group on Guidelines on ADHD have lodged an appeal to call for children with attention deficit disorders to receive medication even in cases where coronavirus containment measures have prevented them from taking the tests. normal doctors. Of the 25 people nominated on appeal, eight have a financial affiliation with Medice.

Thirty years ago, methylphenidate was only very rarely prescribed in Germany. Between 1993 and 2013, consumption multiplied by 50 and has since stagnated to a high level. Exact figures are rarely collected, but a study by public health insurer Barmer GEK found that 6.5% of boys nine to 11 years old and 2% of girls received ADHD drugs in 2011 .

Medication is often given because it seems like a child is not too focused in class. That was the case with an 11-year-old boy who came to Meinhart’s office last Thursday. The family requested that the boy’s name not be included in the article. Her mother says she and her husband would have been fine if her son hadn’t gone to high school, but her son had insisted.

The boy was prescribed methylphenidate in late 2019, before the pandemic occurred. He improved his grades in the middle of closing and got them to the level he needed to get into high school. But neither his classmates nor the teacher know he continues to take medication. “We don’t tell people,” her mother says. “I don’t want to have to justify myself.”

For Lukas, the pandemic was the deciding factor. Psychotherapist Meinhart also treated him every week during the first wave of the pandemic as he tried to make sense of the child’s concerns and increase his self-confidence. But Lukas’ suffering was made worse by the tense situation at home and Meinhart suggested to his parents that he be allowed to receive a prescription.

“What’s happening here is actually a labeling process: we determine a deviation from the norm, we determine the behavior, and we pathologize it,” Meinhart says. “And, of course, you respond pharmacologically if there are no other options.”

Lukas started with 10 milligrams of methylphenidate a day. “You could tell when I gave it to him in the morning,” his mother says. “Maybe a quarter of an hour later, Lukas would be very calm. Then the homework worked well: he was also able to concentrate on it, working on it quickly, with perfect maneuverability.”

Her father remembers how Lukas could spend hours and hours playing with Lego or Playmobil in his room. “After the first week, we started asking ourselves, ‘Is it normal? It scared us.’

After a few months, things got even scarier, when Lukas started having fun contractions. “He started having those weird facial tics, so I panicked a little bit.”

Tic disorders are known side effects of the drug. It can increase tics that are already present or trigger them. The drug can also be an appetite suppressant and an overly high dose of the drug can make children look sedated. It is also unclear whether long-term use can permanently alter brain plasticity. That’s why child psychiatrists stop smoking from time to time.

“After the first week, we started asking ourselves, ‘Is it normal? It scared us.’

Lukas stopped taking it soon after and switched to another drug (a selective norepinephrine reuptake inhibitor), but it doesn’t seem like he’s doing much. He has resumed the launch as before and even hits himself.

Psychotherapist Meinhart has told his mother to stop doing homework along with Lukas. “It’s not worth it. It could just ruin your relationship with your child,” she says.

Now, everyone is relieved that Lukas can return to school normally, with the restrictions of COVID-19 in Germany. They also expect you to have fewer problems.

One of the things we have learned from the pandemic is that canceled classes or chaotic classroom situations can trigger mental disorders. By contrast, those children who were quiet but had trouble concentrating flourished during the pandemic because they no longer had to be in a crowded classroom and could work at home in peace.

“The relatively high rate of methylphenidate prescriptions in Germany is also a product of problems with the systems of society (at school or in the professional life of parents) that are somehow supposed to be solved by families. “says Meinhart. Many are good at finding ways to fix them, but others are less so. As such, politics and society should do more to strengthen schools. “If we had two teachers per class and more school psychologists, we would need fewer medications.”

Dr. Maxton, based in Hamburg, draws a similar conclusion. “Classes need to be smaller,” he says. “A class size of 10 to 15 students is optimal for learning, and is very necessary for children with ADHD.”