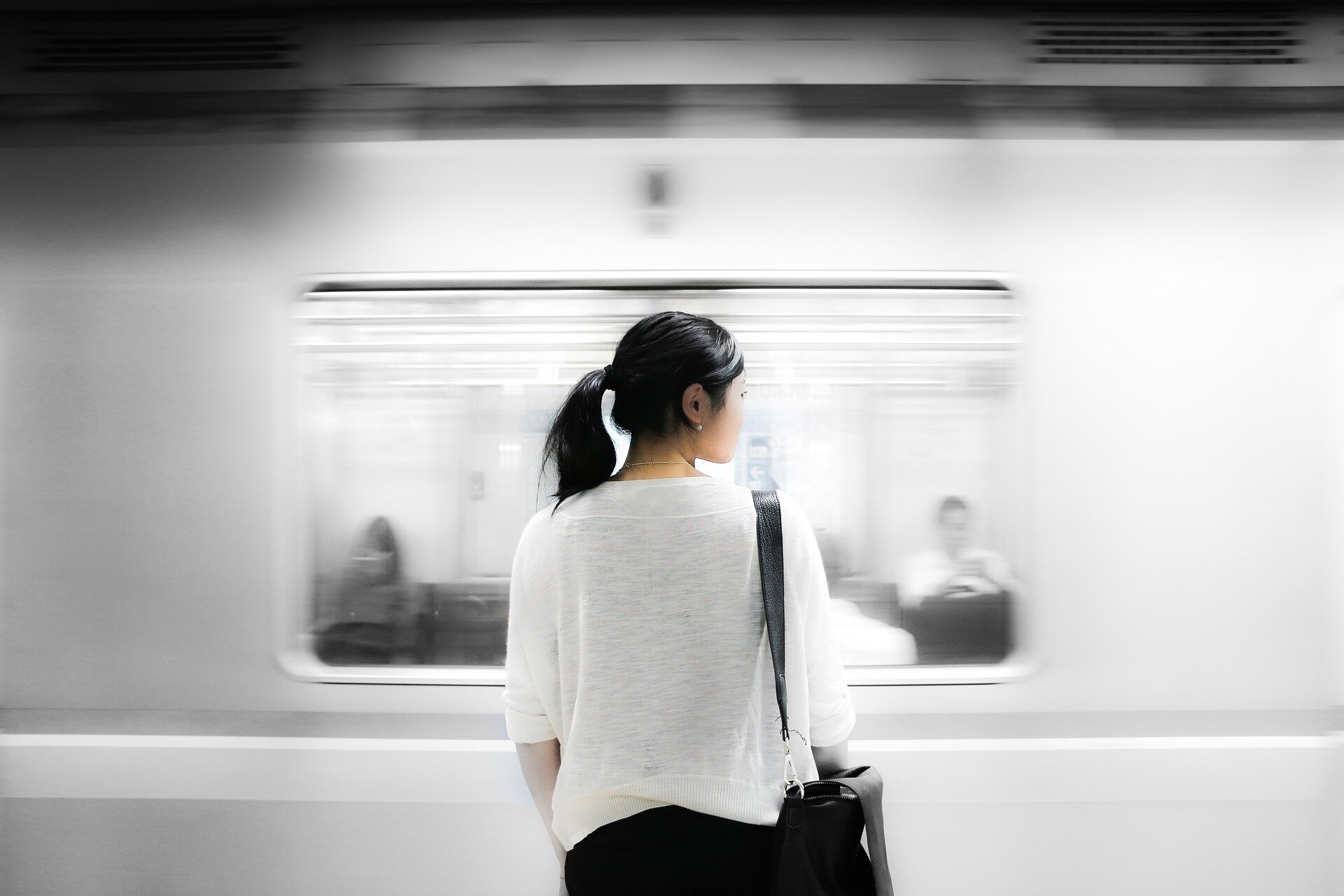 Eric Yung and his aunt, Patricia Lee, have seen a lot from their vantage point at Union Square Flowers, the stand they run just off Market Street in San Francisco. But last month, when the two saw a man rush by with a large knife in his grip, they knew there was going to be trouble.

Within moments, two Asian American women, one in her 80s and another in her 60s, were stabbed—neither fatally—at a bus stop near their outdoor shop. And while authorities said there wasn’t enough evidence to charge Patrick Thompson, 54, with a hate crime, that the May 4 attack came on the heels of a wave of anti-Asian American attacks and incidents was disconcerting.

“You try not to think about it. You don’t want to be paranoid,” Yung said. He nodded toward his aunt. “Sometimes I do feel afraid—but more for my family.”

Asian American community advocates say the mental health toll of such incidents, which have spiked during the pandemic, is rampant and devastating—especially for the community’s elderly, who were already suffering the effects of isolation after months of a nationwide shutdown.

Now, a recently released report shows that, among other things, Asian Americans are more stressed by the atmosphere of violence and hate than by the pandemic itself, despite disproportionately high rates of long-term unemployment and health effects brought on by the contagion. Last fall, Asian Americans in San Francisco accounted for nearly 40% of COVID-19 deaths despite comprising just 12% of all positive cases.

According to the report, Asian Americans who experienced racism during the pandemic display heightened symptoms of depression, anxiety and stress—and one in five show signs of racial trauma, the psychological and emotional harm caused by racism.

Stop AAPI Hate received more than 6,600 hate incident reports on its website between March 2020 and March 2021, a figure advocates note is likely an undercount. About two-thirds of the incidents involve verbal harassment, with physical violence accounting for another 12% of the tally.

“We have never seen violence happening against our seniors like it’s happening now,” said Anni Chung, president and CEO of Self-Help for the Elderly, a 55-year-old San Francisco agency providing social services to largely low-income, immigrant elders, many of whom she said have abandoned their ritual morning strolls.

“Our seniors love their morning walks,” Chung said. “That’s their enjoyment, going out to Golden Gate Park and walking for an hour, or doing tai chi. But all this exercise just stopped.”

The Market Street stabbings are the latestact of violence against Asian Americans to weigh on her clients’ psyches, she said.

“The fear is real,” Chung said. “They’re staying home, not going out for groceries or even fresh air. So we worry for both the physical and mental health of our seniors.”

Advocates said the resulting trauma, along with cultural attitudes about mental health, prevent many from seeking help and places them at greater risk for long-term harm as heightened anxiety and feelings of helplessness affect peace of mind and reduce social connections.

The situation has unnerved a population typically prone to lower levels of psychological distress and mental health treatment compared with other racial and ethnic groups. As a result, service providers are seeing an unprecedented demand that advocates fear community resources aren’t equipped to handle.

“We are looking at potentially a four-fold increase in anxiety and depression,” said Anne Saw, an associate psychology professor at Chicago’s DePaul University who was among the report’s lead researchers. “Racism is not something that happens and people brush it off. It affects them psychologically. People are still reporting symptoms nine months later. That’s a really important takeaway.”

While Asian Americans in the United States have experienced racism for more than a century, last year’s political rhetoric about the origins of the coronavirus inflamed sentiments to a degree not seen in decades.

“What really strikes me is how Asian Americans who experience racism say that’s their greatest stressor, more so than a pandemic that’s killed hundreds of thousands of people,” said Asian American studies professor Russell Jeung of San Francisco State University, whose work tracking pandemic-related xenophobia and racism inspired the launch of the Stop AAPI Hate Center. “For people to be more fearful of other Americans shows how traumatizing that is.”

As a result, he said, Asian Americans are worried about themselves, about their children’s safety as they send them back to school, and about their elders, who have self-isolated even further.

“We’re experiencing a collective trauma,” Jeung said. “You can see your grandparents in the people being attacked.”

Clinical psychologist Richelle Concepcion, president of the Asian American Psychological Association, said one reason many have felt more stressed by hate incidents than the pandemic is that they knew no sure way to respond, compared to the prescribed measures for confronting the virus, some of them—such as wearing masks—already culturally ingrained.

“With the pandemic, as with any virus, folks knew how to protect themselves,” Concepcion said. “But when it comes to hate, that was something people weren’t prepared to deal with. It left them feeling unsafe.”

Stop AAPI Hate’s study found that one in five respondents who had experienced racism endured lasting psychological or emotional harm, while other research, led by Boston University professor Hyeouk Chris Hahm and Harvard Medical School pediatrics professor Cindy Liu, found some individuals suffering from conditions associated with PTSD—even those who did not directly experience hate incidents.

“Even if they just witnessed it or become aware of it on Facebook,” Concepcion said, “they developed some of those symptoms, too, like anxiety, rapid heart rate, feeling like you’re on edge constantly. Some feel like they have to avoid certain places because something might happen to them.”

Between bouquet sales at San Francisco’s Union Square Flowers, Lee and Yung recalled an Asian American woman in her 40s who came by the stand after last month’s stabbings armed with pepper spray and constantly looking over her shoulder as she made her purchase. A neighborhood monitor who volunteered to walk the woman to her car later told them that when they hit a pedestrian stoplight en route, she instructed him to watch their left while she scanned the right for any approaching dangers.

“It’s getting worse,” Lee said. “We’ve never seen it like this.”

Cultural attitudes about mental health can be a barrier to help

Among other findings of the Stop AAPI Hate report was that those who reported incidents of racial bias to the center lowered their stress levels by doing so: Nearly three in 10 no longer met the criteria for race-based trauma after reporting such incidents, the report said, suggesting that doing so offers an important coping mechanism.

“People are expressing their anger or stress, and that translates into action,” said Jeung, the Asian American studies professor. “They’re not just sitting with it.”

By proactively seeking out the Stop AAPI Hate website and filing a report, people sought benefits not necessarily for themselves but for the collective good.

“They know it could lead to policy change,” said psychology professor Saw. “People don’t expect it to be passive. They expect it to lead to something.”

With Asian American elders confined by the pandemic and fears of physical and emotional harm, advocates worry about those who want help for their stress, anxiety or depression but don’t know how to access it, or those who can’t find help in their language. Beyond that, they say, cultural attitudes about mental health and counseling might be dissuading many from seeking help in the first place.

Others adhering to cultural beliefs about one’s body being in balance might write off their malaise to eating too much hot or too much cold food, Chung said, “but if they could express that to people who could help, those people could intervene.”

That might mean helping seniors restore that balance by taking them to a Chinese herbalist or making soup for them, activities that provide beneficial face-to-face interaction. “But if you say, let’s take you to a mental health counselor, they’ll say, ‘Oh no, there’s nothing wrong with me,'” Chung said.

Concepcion, of the psychological association, said that in addition to changes in appetite or sleep patterns, anxiety and depression can manifest as migraines or fatigue, “so it’s really important to let providers know they have to look deeper into what’s going on with patients before writing it off as just insomnia or a headache.”

The association was founded in the 1970s, at a time when few organizations addressed the psychological needs of Asian Americans, which can vary depending on their national origins.

“It’s not enough to educate someone about what the general psychology says,” Concepcion said. “You have to look at certain things through a cultural lens.”

“Some are doing online karaoke as a way to connect with other people,” Concepcion said. “It’s approaching it from that perspective, without necessarily psychologizing things.”

Chung said her center makes numerous social welfare checks on elderly clients closed off from family or friends, “but talking to them for a few minutes on the phone isn’t the same as them coming to the community center for four hours.”

As the pandemic canceled social activities such as field trips and bingo games, calls came in from those who only knew how to express their loneliness by signing up for the agency’s home meal delivery.

“They needed the interaction badly,” Chung said. “Seniors don’t want their children to worry about them, and even if they’re not feeling well, they won’t tell them until it’s very serious. We tell them our job is to be bothered—we want to know about every ache and pain.”

That’s why when potential volunteers contact her to ask what they can do to help, she tells them it’s probably a good time to call the elders in their lives and ask the same thing.

“Maybe it’s taking them for a walk or accompanying them to the bank,” Chung said. “Those are small gestures that can go a long way toward reassuring our seniors right now.”

“We hired five, and we’ve already received 80 requests,” Chung said. “It makes them feel normal again. But with all the seniors, there’s no way to meet all the demand. And for those who don’t have relatives to walk with them, what do they do?”

Yasuyo Floyd, a 67-year-old Japanese-language coordinator for Sakura Kai Senior Center, a support agency in El Cerrito, California, said that while she personally has not been assaulted, she now takes precautions on her morning walks such as carrying a whistle or walking in populated areas.

“I have definitely become more vigilant,” she said. “I think it’ll take some time for older seniors to feel safe to walk on their own.”