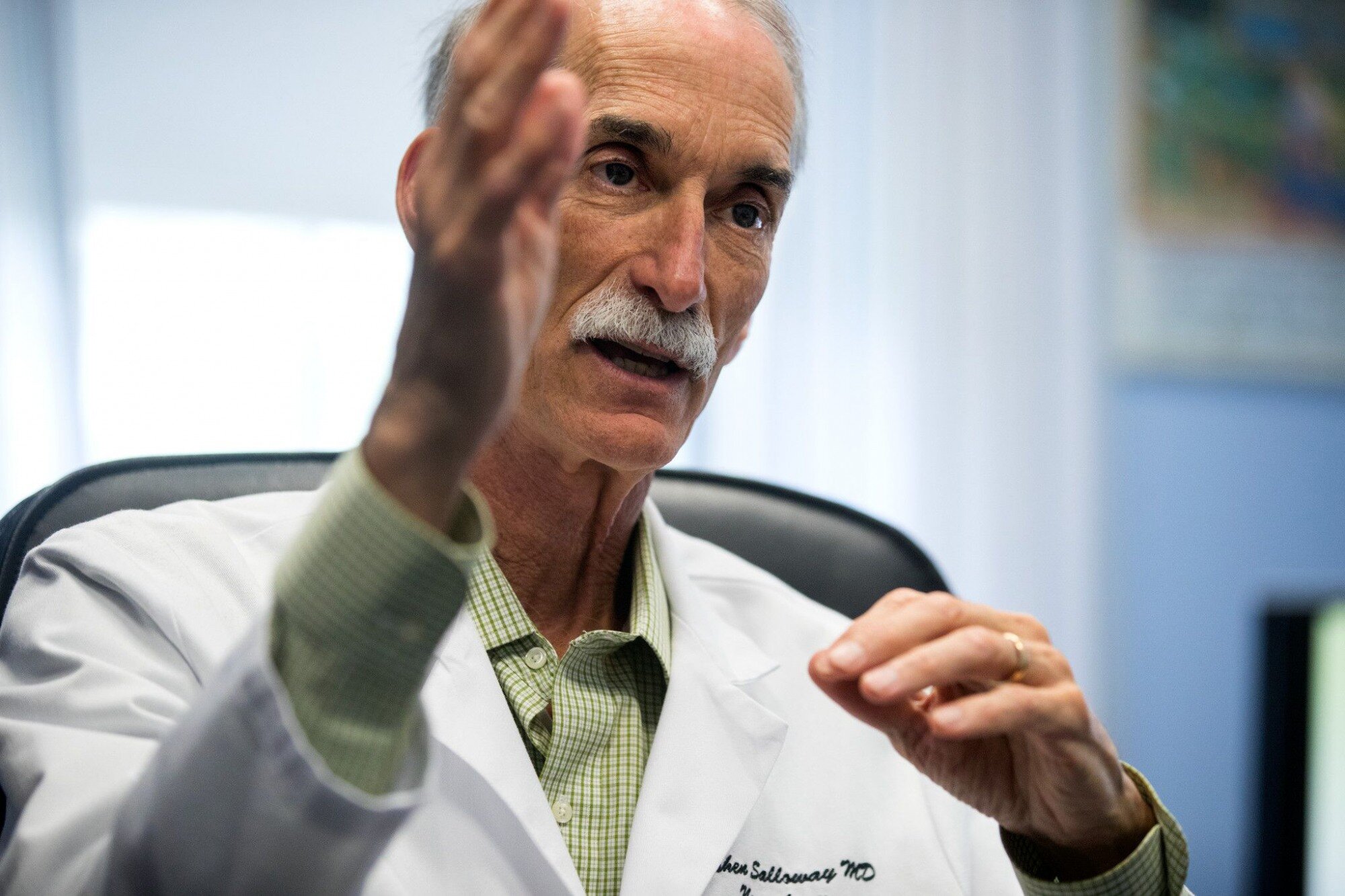 In a long-awaited announcement, the U.S. Food and Drug Administration on Monday, June 7, approved the first new drug for Alzheimer’s disease in nearly two decades.

This approval was not without controversy. Both before and after the FDA decision, physicians and researchers expressed a wide variety of perspectives on the drug’s potential, given a limited evidence base, and multiple stops and beginnings in its development and approval process. .

The drug, called adducanumab during development and clinical trials, is branded and sold as Aduhelm. Dr. Stephen Salloway, a professor of neurology and psychiatry at Brown University, has been closely involved in its clinical development from the beginning.

alloway was principal investigator of the site at Butler for both phase 1 and phase 3 trials of aducanumab, co-chair of the research steering committee of the phase 3 program and has advised the drug manufacturer, Biogen, on protocols safety and side effects management. He shared his perspective on what FDA approval means for Alzheimer’s patients and for future research on the disease, including the new Brown Center for Alzheimer’s Research, a collaboration between the Carney Institute for Brain Science and the Division of Biology and Medicine for which Salloway will serve as associate director.

Q: How does aducanumab differ from other Alzheimer’s treatments?

It is important to know that this is the first drug aimed at a basic component of Alzheimer’s disease: amyloid plaques that play a key role in memory loss. Aducanumab is a monoclonal antibody made from the immune cells of the elderly without any cognitive impairment or infrequent cognitive impairment. It binds to amyloid plaques and breaks them. Other Alzheimer’s drugs focus on neurotransmitters; they alter different brain chemicals to help improve functioning, but they don’t really address the underlying pathology of the disease. Aducanumab is also different in that it is an immunity-based treatment that should be given intravenously on a monthly basis, ideally in a hospital infusion center. Treatment should be supervised by a specialist who is familiar with the patient and their diagnosis, as well as with medicine and the management of possible side effects.

Q: Why did the FDA review and approval process include so many delays?

The development of this drug began with a very promising appearance. The phase 1 trial showed that the drug reduced amyloid levels in the brain and there was some evidence that it slowed cognitive decline. We then enrolled participants in larger phase 3 trials to confirm these first data and found that it was safe to increase the dose for participants carrying the APOE4 gene for Alzheimer’s. We did a dose change for two-thirds of the study participants, and this affected how many people got the full dose. The trial sponsor, Biogen, did a tentative analysis a year before the end and was concerned about the results and stopped the trial soon, with only half of the participants. Later, they analyzed all available data and found that one trial was positive and the other was not. Biogen then submitted the drug to the FDA for approval. The FDA granted accelerated approval that allows patients with this devastating disease to access an amyloid-reducing drug with the need for an additional study to confirm the clinical benefit.

Q: There are doctors and scientists who disagree with the FDA’s decision to approve the drug at this stage and based on the available evidence. What is your response to the concerns they have raised?

I understand the concerns about the data, but I think the totality of the tests (a clear reduction in amyloid and two out of three trials with clinical benefits), as well as the severity of the condition, favor accelerated approval. I support the FDA requirement for further study to confirm positive results; I think this is right. I think they are trying to find a balance between offering this treatment for a devastating disease without having to wait another five years, but they also require more data and careful monitoring of patients. This approval, in my view, will accelerate research on Alzheimer’s. For example, we know that the drug is not for all patients, so we need to find out why. In addition, candidates will be determined by screening, so we mean we need to find better, more efficient, and accessible ways to do patient screening tests. I see this as a breakthrough that requires researchers to move forward.

Q: Which patients are the best candidates for treatment with adducanumab?

The best candidates for this drug are those who are in the early stages of Alzheimer’s, who show signs of mild cognitive impairment and mild dementia. This means that there is objective memory loss, but the person continues to function independently, although they may need some help. They should also show amyloid buildup in the brain – only those people who have amyloid plaques will be able to receive the drug. It is very important to note that this medication is not intended for people with Alzheimer’s or advanced dementia, who have advanced memory loss, or moderate or severe cognitive or physical impairment; has not been tested in patients in the later stages of Alzheimer’s.

Q: What has been your experience in treating patients with the drug?

The memory programs at Butler Hospital and Rhode Island Hospital together probably contributed the largest number of patients to these trials. I have personally been treating over 65 patients with adducanumab and I am very grateful to them for volunteering to be part of this research. These people really took a risk by entering the unknown. Some have been receiving monthly infusions of this experimental drug for more than five years. We are told that they wanted to do this to protect their children and grandchildren and the children and grandchildren of other people from Alzheimer’s. It’s incredibly inspiring and I’m thrilled that this approval means they can witness some of the results of their participation. Most of the patients I have treated have done better than expected. It doesn’t work for everyone, but for some people, it seems to have slowed their decline and they have had a better quality of life for longer, which is really fantastic.

Q: What are the possible side effects?

This drug is usually very well tolerated. The main concern is something known as “amyloid-related imaging abnormalities” or ARIA, which can be seen on MRI scans as fluid changes and small areas of microhemorrhage in the brain. What is happening is that as the drug breaks down amyloid plaques, the fragments move in the bloodstream. In addition, some plaque is removed from the walls of the blood vessels in the brain and can cause some fluidity. If this occurs, it usually happens early in treatment and without symptoms. The process is usually reversible and we monitor it with MRI until it is resolved. This side effect is dose related, so we have learned to increase the dose slowly. It has been shown that the highest dose, 10 milligrams per kilogram, is the most effective, which is why we need to start going down and accumulating slowly to avoid side effects. People who carry the APOE4 gene for Alzheimer’s also tend to have a higher risk of developing this side effect.

Q: Because the drug is intended only for those with amyloid buildup, what are the next steps when it comes to researching Alzheimer’s screening?

To treat people with this medicine, we must first check them for amyloid. And right now the only tools we need to do are PET scans, which are expensive, and spinal taps, which are invasive. What we need is one blood test which can provide us with the same information about the plates. This will be one of the key axes of Brown’s new Alzheimer’s Disease Research Center. We are building a new fluid biomarker lab, which will focus on Alzheimer’s, but will also investigate other neurological and psychiatric conditions. We already have some promising blood tests ready and want to prepare them for clinical use as soon as possible. The goal is to be able to do a blood test to see what’s going on in the brain and hopefully integrate it into clinical care to improve access and reduce costs.

Q: What other ways to affect this drug in Alzheimer’s research?

We don’t know for sure, but we wonder if maybe this drug can help people who are at risk for memory loss, if we remove the plaques before they decrease, this will delay or prevent memory loss together? This is something we will analyze over the next five years through prevention trials and look for volunteers. One of the reasons I’m so positive about this approval is not just for this one drugs, is due to the process opening. We now have a new treatment that reduces amyloid, which is a good start, but hopefully we can combine it with other treatments to have an even greater impact on the disease. Perhaps we can combine it with something that reduces inflammation or affects some other component of the disease. This is the kind of research on discoveries we plan to conduct at the Alzheimer’s Disease Research Center, and we are now in a very good position to move forward.

Three FDA advisers stopped approving the adhelm by the agency