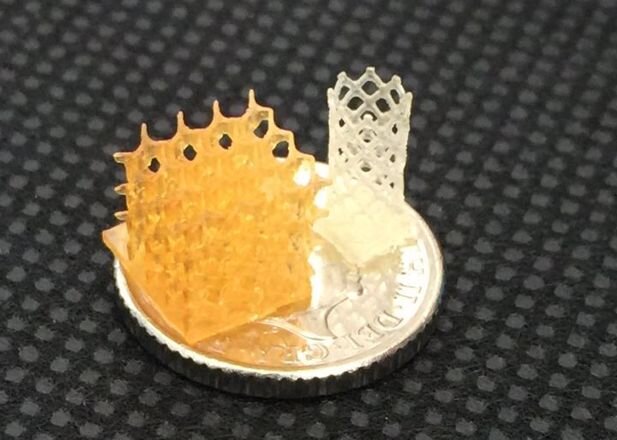 Research published today has demonstrated the viability of 3D-printed tissue scaffolds that degrade harmlessly and promote tissue regeneration after implantation.

Professor Andrew Dove, of the Faculty of Chemistry at the University of Birmingham, led the research group and is the lead author of the paper published in Communications on Nature, which characterizes the physical properties of scaffolds, and explains how they arememory of forms‘is key to promoting tissue regeneration.

Professor Dove commented: “Scaffolds have evenly distributed and interconnected pores that allow the diffusion of nutrients from surrounding tissues. Shape memory means that this structure is preserved when scaffold is implanted in the tissues, which favors the infiltration of cells into the scaffold while encouraging tissue regeneration and revascularization “.

The scaffolding showed several important advantages over current approaches used to fill gaps in soft tissue that remain after trauma or surgery, including sufficient elasticity to adapt to uneven spaces, the ability to undergo compressions. up to 85% before returning to its original geometry, tissues and non-toxic biodegradation.

The document describes several compositions for 4Degra resins that allow to manufacture materials with a wide range of resistances. All compositions include a photoinitiator and a photoinhibitor to ensure that the resins quickly become ice on exposure to light from the visible spectrum to allow their 3D printing in a range of scaffold geometries.

The researchers showed that the materials were not toxic to the cells and also performed mechanical tests to make sure the scaffolds could regain their shape, geometry and pore size after compression, and performed tests that demonstrated that scaffolds can fill an irregularly filled void in alginate gel that was used as a mimic of soft tissues.

Laboratory studies showed that the scaffold degrades by surface erosion into non-acidic products, meaning that the structure of the scaffold allows for slow and continuous tissue infiltration.

The findings were confirmed in a mouse model that simulates implantation in adipose tissue (fat). These studies showed infiltration of adipocytes and fibroblasts and vascularization at two months, and a tissue arrangement and presence of macrophages that were indicative of normal tissue restoration rather than damaged, scar tissue, or an inflammatory response.

At four months, the researchers found small, mature blood vessels in the surrounding tissue. The scaffolds also demonstrated excellent biocompatibility. The collagen capsule formed around the implants was less than 200 μm thick, well below the 500 μm threshold used for biocompatibility in other studies and there was no calcification or necrosis.

Also at four months, 80% of the scaffold was still present, demonstrating the slow degradation predicted by laboratory studies, and indicating that the scaffolds would provide support for more than a year, allowing sufficient time for the scaffold. bulk of mature tissues. The controls, which used poly (L-lactic acid) (PLLA) as a comparator, did not show a significant reduction over the four-month period.

Professor Dove comments: “3D printed materials have received much attention in the world of tissue engineering. However, gap-filling materials provide mechanical support, biocompatibility and surface erosion characteristics that guarantee support. uniform tissue during the curing process, and this means the fourth dimension (time) must be taken into account in the design of materials.

“We have demonstrated that it is possible to produce highly porous scaffolds with shape memory and our processes and materials will allow the production of self-adapting scaffolds that adopt soft tissue vacuum geometry in minimally invasive surgery without deforming or applying pressure to surrounding tissues. over time, the scaffold erodes with minimal swelling, allowing for slow continuity fabric infiltration without mechanical degradation “.

4D Biomaterials has made rapid progress in increasing the production of 4Degra resin inks at its MediCity laboratory in Nottingham (UK) and now offers technical quality material for commercial supply to 3D printing companies and medical device manufacturers.

CEO Phil Smith said: “We are looking to partner with innovative companies in Europe and North America to develop a new generation of 3D printed medical devices that translate the unique benefits of the 4Degra resin ink platform into improved treatment outcomes for patients “. With the first customer submissions submitted and a round of funding about to close, Phil added, “We’ll be making more announcements soon.”

Provided by
University of Birmingham