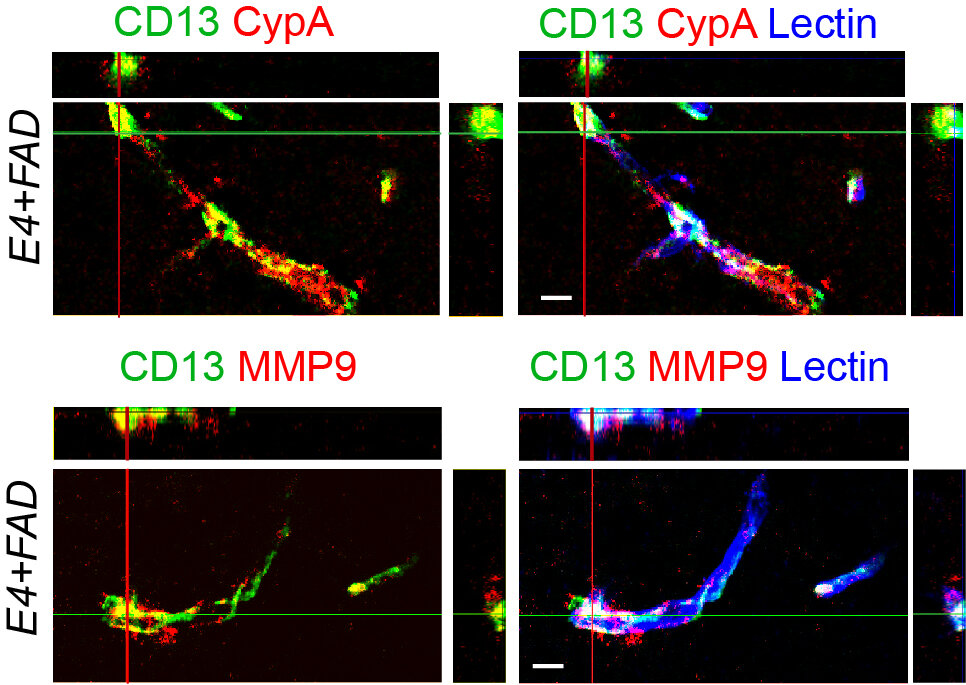 Like amyloid plaque, the genetic variant APOE4 has long been associated with Alzheimer’s disease, but little is still known about the role the gene plays in the disease process.

Now, a new study is published in Aging of nature not only does it shed light on how the gene can cause a cascade of pathologies that contribute to Alzheimer’s disease, but it also suggests a new treatment goal that can help people who carry the APOE4 gene in the early and late stages of disease. Researchers at USC’s Keck School of Medicine found that APOE4 is associated with the activation of an inflammatory protein that causes a breakdown of the blood-brain barrier that protects the brain.

This research is based on a recent USC study that revealed that APOE4 triggers leaks in the blood-brain barrier in humans, allowing blood flow in the brain, damaging brain cells and altering cognitive functions. This process causes memory problems in patients, whether or not their brain shows signs of amyloid-β, the adhesive plaque peptide considered a hallmark of the disease.

Recent findings also suggest a potential new treatment to slow or prevent cognitive decline associated with Alzheimer’s disease in patients with the APOE4 gene, regardless of amyloid-β pathology.

“We are focusing even more on the therapeutic goals of blood vessels which could provide innovative treatments to people with Alzheimer’s disease, both in the early and late stages of the disease. Current findings in mouse models may be particularly promising for the treatment of late-stage disease in the presence of advanced β-amyloid pathology, ”said Berislav Zlokovic, MD, Ph.D., director of the Zilkha Institute of Neurogenetics. Keck School of Medicine at USC.

The role of APOE4, pericytes, and cyclophilin A in Alzheimer’s disease

APOE4 has been shown to accelerate the rupture of the blood-brain barrier by damaging pericytes, a layer of cells that strengthen and protect the brain capillaries that make up the blood-brain barrier. This breakdown is also associated with higher levels of cyclophilin A, a proinflammatory protein, in the brain vessels of Alzheimer’s disease patients with the APOE4 gene.

In this study, USC researchers focused on cyclophilin A in mice with the APOE4 gene, which has a high risk of developing Alzheimer’s disease, and in mice with the APOE3 gene, which carries a medium risk of suffering. Alzheimer’s. Cyclophylline A is found in pericytes and controls the strength of blood vessels to maintain the integrity of the blood-brain barrier. In APOE4 mice, the researchers found that cyclophilin A caused an enzyme that degrades blood vessels in the blood-brain barrier (matrix metalloproteinase 9 (MMP9)) to become active. This did not happen in mice of the APOE3 gene.

The researchers tried to treat APOE4 mice with an inhibitor known to suppress cyclophilin A. The inhibitor not only improved integrity in the blood brain barrier in APOE4 mice, but also prevented the development of neuronal loss and behavioral deficits. The researchers observed that APOE4 mice treated with the inhibitor did not show behavioral deficits during daily activities. This suggests that treatment targeting this pathway may have the potential to also slow the progression of vascular and neurodegenerative disorders in people with Alzheimer’s disease who have the APOE4 gene.

“So far there has been little hope for those in the final stages of the disease, which is very hard for patients and their loved ones,” Zlokovic said. “We are delighted to further study the potential on which the interventions focused blood-brain barrier the repair and strength of blood vessels, regardless of amyloid pathology, could be had in slowing or stopping neurodegeneration and cognitive impairment of advanced Alzheimer’s disease. “

The inhibitor used in this study to suppress cyclophilin A, Debio-025, has been used in humans to treat hepatitis C, suggesting that this could be a potential treatment for cognitive impairment in APOE4 carriers showing activity. of the cyclophilin A-MMP9 pathway early or late disease stages.