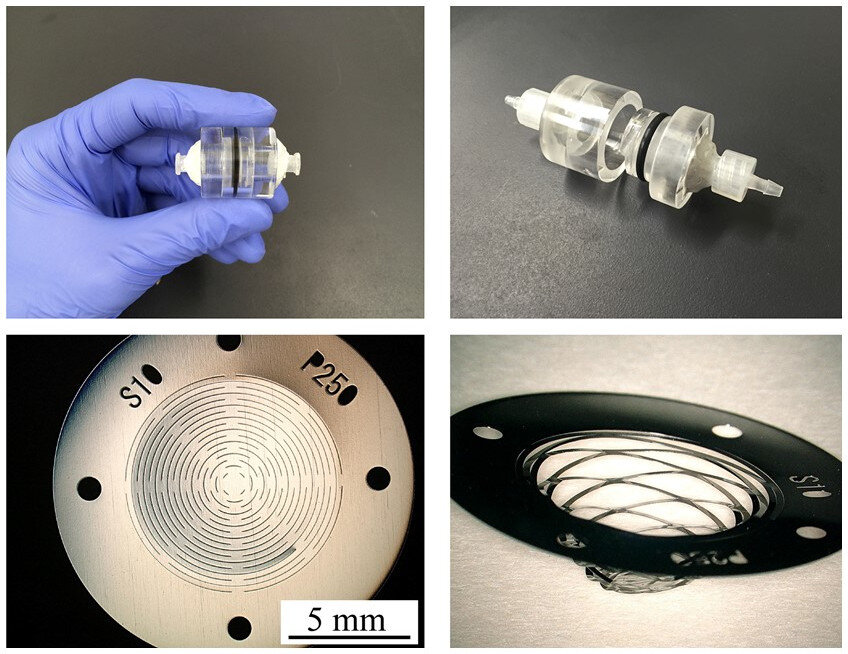 A research group at Kumamoto University has developed a microfilter device that can easily separate and capture traces of cancer cells in the blood. The palm-sized device is expected to contribute to the development of new cancer diagnostic technologies based on cancer cells in the blood, such as early detection by blood analysis, postoperative management, and recurrence control.

He blood of people with cancer contains traces of cancer cells (CTC) that have been detached from the primary site of cancer. However, the amount of these cells is only a few per milliliter, while the red or white blood cells number in the billions, making it very difficult to separate and detect them. Although devices to detect CTC have been developed in the past, they require expensive equipment and reagents, which has meant a bottleneck for their practical application.

The single microfilter device developed by the Kumamoto University research group can easily and economically separate and capture CTC without any equipment. The device deforms dynamically and three-dimensionally by the force of the fluid as blood is pumped through it. It also uses nucleic acid aptamers, which bind specifically and firmly to target molecules. This allows the separation and capture of small, affinity-selective cancer cells.

By evaluating the device, the researchers showed that it could capture cancer cells even at a concentration of only five cancer cells in one ml of healthy blood. Because there are about five billion blood cells (red and white) in one ml of blood, the device proved to have a very high detection capability. The researchers also found that the microfilter absorbed almost no blood cells, achieving a blood cell elimination rate of over 98%. It also had a high capacity for selective detection. In addition, in a comparative evaluation, they demonstrated that the device was able to detect cancer cells more accurately than existing devices.

“This work demonstrates that our microfilter device can accurately detect traces of cancer cells in the blood,” said Associate Professor Yuta Nakashima, who led the study. “We hope it will be adopted for cancer diagnosis and treatment, including for the early diagnosis of cancers that cannot be detected by imaging, such as CT and PET, postoperative monitoring, recurrence control, and tailor-made treatments. In the future, we plan to use it blood samples given by cancer patients to verify the practical and clinical application of the method “.


Citation: A device capable of detecting cancer cells in a milliliter of blood (2021, June 29) recovered on June 29, 2021 at https://medicalxpress.com/news/2021-06-device-capable-cancer- cells-milliliter.html